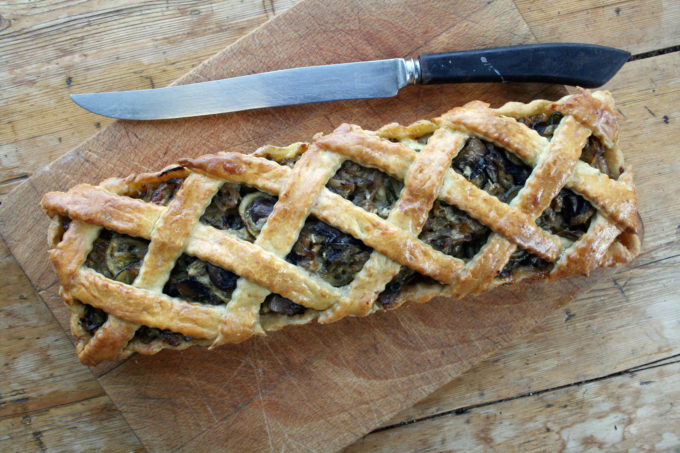 … another crazy couple of weeks, in fact last weekend I didn’t even manage to cook anything, which of course I don’t like at all. I seem to have done something rather dodgy to my left knee, calf and hamstring.  We’re not quite sure what’s going on but i’m having some therapy on it and if it doesn’t improve I shall take it off for a scan.  It’s very frustrating as i’ve just got into the full swing of my new boxing and HIIT sessions which i’ve been loving but clearly i’ve been working at it too hard.  I genuinely think it’s an age thing rather than not being careful.  I know my limits and I know my issues with my back but I my fitness sessions involve me surrounded by kids who could quite literally be my kids and I think I try to keep up with them too much and if I want to carry on i’m going to have to pull back a little.  I also had a mini asthma attack last Sunday night.  I haven’t suffered from asthma for at least 15 years and I think the warm weather, tree pollen and the current levels of stress haven’t helped.  The day after my attack I had to get on a plane to Dublin for work so i’ve not really stopped and so this weekend i’ve collapsed into a bit of a stupor – much needed and not at all regretted by me but of course it does mean my blogging is taking a little bit of a back seat for a couple of week… I hope you’ll forgive me.  of course I’m still eating, so here’s a lovely pie that i’d like to share. 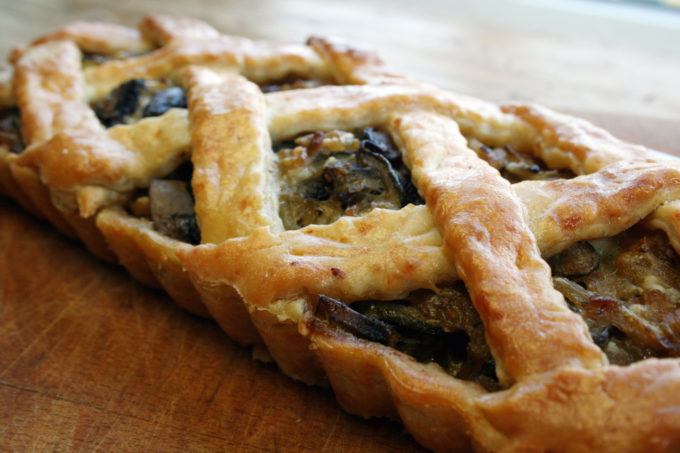 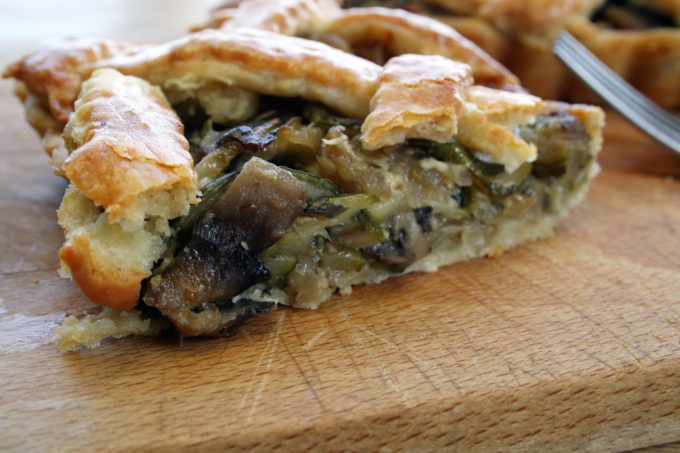 it’s a glorious weekend here in the UK with some unseasonably warm weather over the whole country it seems and here at Belleau Cottage we’re spending as much time in the sunshine as possible as no doubt it won’t last.  The Viking is continuing with his labour of love that is the garden – it’s quite incredible how much it’s come along in the two weeks that I haven’t seen it, and i’m enjoying developing some more summery recipes such as this courgette pie.  I adore courgettes or zucchini as they’re called elsewhere in the world.  They’re such a versatile vegetable and seem to straddle seasons so well.  of course they don’t properly come into their own until the end of the summer season but now that all kinds of vegetables are readily available all year round we can enjoy their goodness whatever the weather… yet they still make me think of the summer.  This pie relies heavily on thyme (and lemon thyme if you can get it) and it really adds its own dimension to the flavour of the whole dish.  It works so well with the courgettes giving them a true Mediterranean flavour.  The mushrooms and onions add depth and texture but you could do without them and just cram the whole lot with courgette.  The cheddar is just there because cheese makes things better…

for the shortcrust pastry

start by making the pastry, which can be done in seconds in a processor by throwing in all the ingredients and a dash of water until it comes together into a dough… or by hand, place all the ingredients except for the water, into a bowl and rub together until it resembles breadcrumbs, then add the water a little at a time, using your hand like a claw, until the dough comes together.  Flatten it out onto some clingfilm, wrap and refrigerate for at least 30 minutes

meanwhile make the filling by gently sautéing the onions in butter and olive oil for roughly 20 mins until they caramelise a little and are an even light golden colour, remove from the pan and set aside.

saute the mushrooms and courgette in more butter and oil… they will take a while to break down so I usually place a lid on them for the first 5 mins so they get soft.  Remove the lid, turn up the heat and throw in the thyme and season well with salt and pepper, then let them colour gently in the heat for a further ten minutes, stirring frequently, until they soften and colour.  Pour the onions back into the pan, stir together, turn off the heat, pop the lid on and let them cool down entirely whilst you roll out the pastry.

generously flour your work surface, cut two thirds off your pastry and rollout out – it should be quite robust but I like to pat down the pastry first with my hand so it becomes the shape I want it to be and am very liberal with the flour too.  Gently lay the pastry into the base of your pie dish and push it into the flutes and edges of the dish and trim off the excess

grate the cheddar cheese into the filling and stir it in, then pour the cold filling into the pie dish and press down.  Create a lid either as an open lattice like i’ve done or a solid lid and brush with beaten egg

bake for 25 mins or until golden brown – set aside to cool slightly before eating.  It also eats well cold from the fridge as a picnic dish. 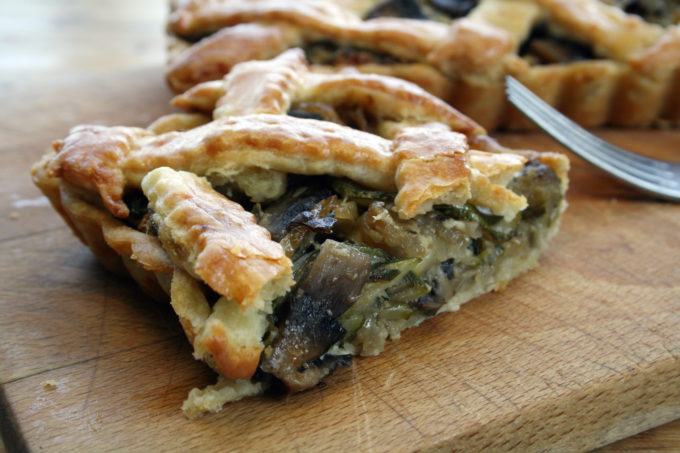