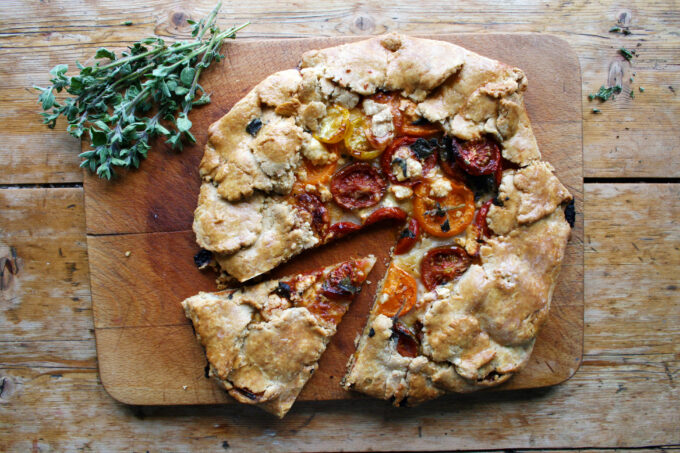 I ordered some incredible tomatoes from The Tomato Stall and there are just so many that I thought I’d make something that really lets them shine.  This tomato galette with parmesan pastry is exactly that.  It’s simple and rustic and allows the tomatoes to really develop an intensity of flavour whilst they bake in the oven.  It’s a messy looking thing but sometimes these rustic dishes aren’t about how pretty they look.  The pastry is so complimentary as the sweet, nutty parmesan works in harmony with the acid of the tomatoes, and the oregano rounds it all out with Mediterranean vibes that I’m just loving right now.  In fact this whole bake gave my kitchen the aroma of a Spanish garden and took me right back to those hot lunches under the shade of a fig tree on a terrace in Mallorca! 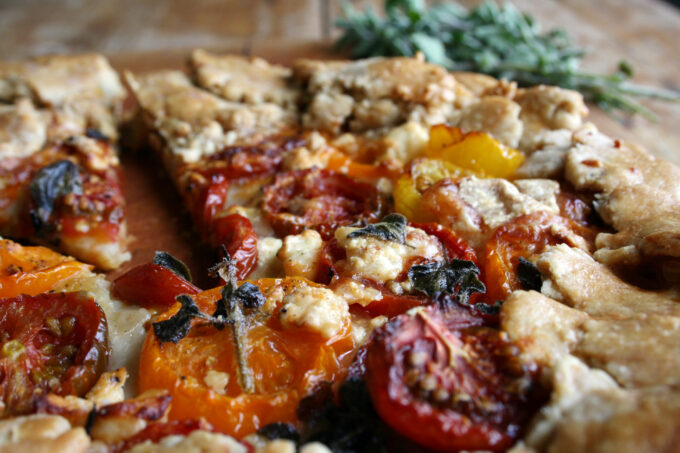 Start with the pastry by placing all the ingredients into a large bowl, apart from the chives and the water, and rub them all together with your fingertips until they resemble breadcrumbs. Stir in the chives and then add a little bit of water.  Using one had in a claw-shape start to stir the crumbs together until they begin the form a dough.  Add a little more water if needed to bring the whole lot together into a ball of dough.  You can almost clean the bowl with the ball of dough.

Once the ball of dough is formed, flatten it out into a disk, wrap in cling film and refrigerate for at least 30 minutes.

Slice the tomatoes.  I like to keep them nice and thick.  Small or cherry tomatoes should be cut in half. Lay them onto some kitchen paper and let them dry a little for about 10 minutes.

Dust your work surface with flour and roll out the pastry nice and thin.  Try and aim for a rough circular shape but it really doesn’t matter if it’s a little rough.  Carefully move the pastry to the lined baking sheet.

Lay the tomatoes into the middle of the pastry leaving at least an edge of at least 1 inch all the way around. Crumble the goats cheese over the tomatoes, then season well, drizzle with olive oil and sprinkle with oregano.

Now, going around the galette, fold the edges over onto the tomatoes and sort of pleat it as you go until you have a rough circle.

Brush with beaten egg and bake for 45 mins or until the pastry is golden and the tomatoes are bubbling. 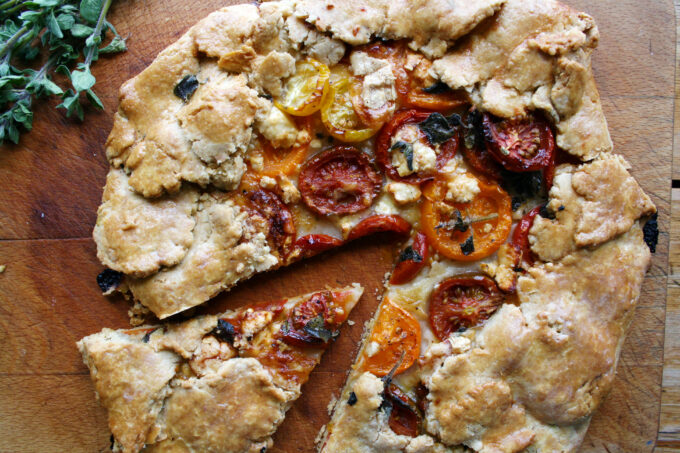 Eat and of course enjoy!