It’s November and I think the summer is finally over.  We’ve had some properly cold days where there’s been actual frost on the ground and returning to the cottage takes guts and bravery to build the fire and gain some heat.  I love it.  It’s undoubtably my favourite time of year for reasons i’ve waxed lyrically on many times before but I think as a British foodie we can all agree that food becomes more about indulgence and comfort rather than style and health which is so much more pleasurable.  I’m currently enjoying the colder weather because I feel that it’s helping me heal.  I realise this may go against many an opinion about the healing benefits of sunshine but this long, hot summer – particularly the end of summer with its ‘on-again-off-again’ will it be hot, won’t it be hot days, has felt like a disease incubator for me.  Too many infections brewing in the muggy warmth.  Two weeks ago, after finally feeling like I was back on track – getting back to work and even enjoying cooking again, I managed to pick up chicken-pox and spent another week in hospital, which as you can imagine wasn’t much fun.  I’m once again over the worst of it and back on what seems a rather rocky road to recovery which is why I’m loving this cold snap and wishing it will finally kill off any brewing infections floating around… of course there’s nothing that a glorious warm bowl of soup won’t heal… 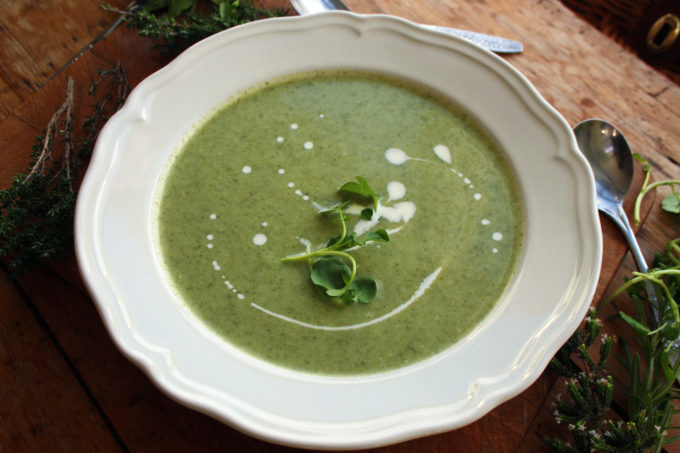 I realise it’s another soup recipe but this is one of my all-time favourite soups… it’s quite a light soup and watercress is hardly in season here in the UK, one could say it’s almost summery in flavour but if you can pick up some good quality watercress, which is strong and peppery, this combined with the subtle aniseed flavour of the fennel and celeriac, the whole soup actually ends up packing quite a punch.  Topped of with cream at the end and you have a divinely rich bowlful of flavour.  It’s also one of the easiest coups to make.  One word of advice is to go easy on the celeriac.  I use just half a ball root.  Once cooked into soups it tends to have to rather ‘fragrant’ qualities to it that tend to re-visit the host at the most inappropriate times!

This soup, like very many foods, also carries an aroma memory for me.  It is the smell of Grandma Sylvia and Grandpa Sam’s house on a Sunday.  We wouldn’t always have it (and very often it had turnips in it rather than celeriac) but that unmistakable twang of watercress is undeniably the scent of a Sunday lunch first course and it makes me very happy.

heat your soup pan and melt some butter and olive oil, add the fennel and celery and let them sweat and soften for roughly 5-8 minutes, then add the potatoes and celeriac along with the thyme, stir well, turn down the heat, place the lid on and let the whole lot sweat for another 7 – 8 minutes or until the potatoes are beginning to soften.

add 2/3rds of the watercress and the stock, season well with salt and pepper, place the lid back on and let it gently simmer for 20 minutes, then take it off the heat, stir in the remaining watercress (this will help the soup retain a fresh green colour) and set aside until luke warm. 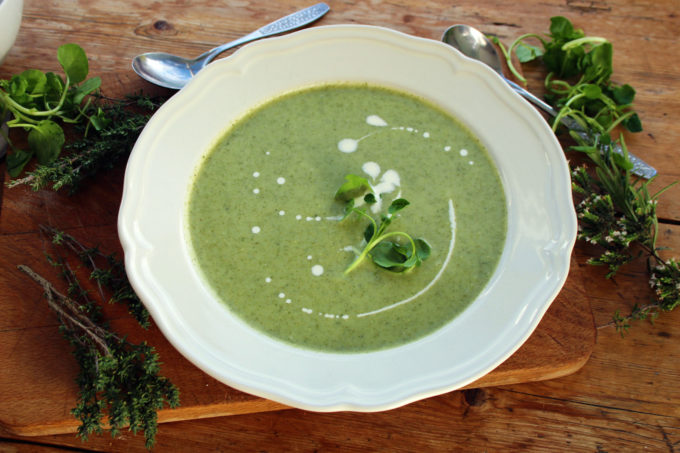