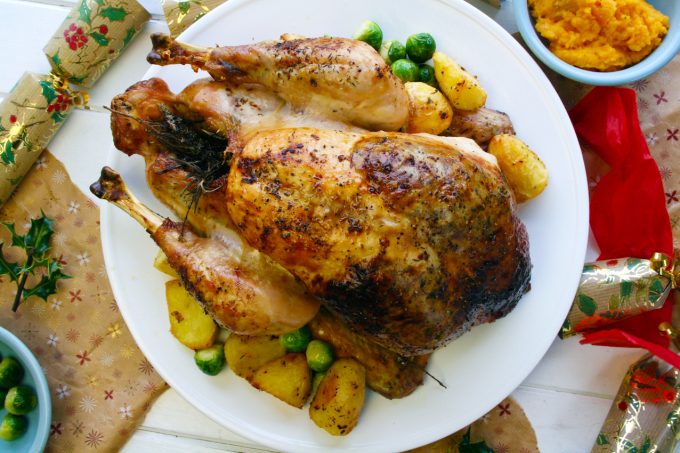 … for many, preparing the big meal on Christmas Day can be a little stressful. If you’re expecting the hoards to descend then there’s a lot to do and many people don’t realise that it’s not just the day itself, there’s a lot of preparation that goes into such a large meal and if you’ve never cooked a traditional Christmas turkey before it can be rather daunting. For me, preparation is the key. You really don’t want to be peeling veg or have a million pots on the boil 5 minutes before everyone sits down –  juggling gravy-making with mashing potatoes. So many of the vegetables, the stuffing and the pudding can be prepped the day or days before and remember that a large turkey needs to rest for at least 45 minutes before serving and it will keep very warm during this period if wrapped with foil and covered in a tea-towel, so this will give you the time to do all the other little bits and bobs… but what I find really helps is a large glass of wine and enough oven and hob space to help you manage the cooking. My new Leisure Range Cooker is perfect for this. It has two ovens, one of which is a tall fan-assisted oven that takes all the vegetables I want to roast and means I can leave the turkey alone in the regular oven to do it’s thing and it also has 5 rings of heat so I can fit quite a bit on top… it is, after-all, supposed to be a day of fun and enjoyment for everyone and that includes the chef!

The good folk at Leisure have asked me and the lovely Kate at Veggie Desserts to create two very different Christmas Day meals which will truly show off our range-cookers.  Katie is creating a stunning alternative Christmas Feast whilst I have been given the task of making a traditional Christmas Day lunch.  I’ve created a three course meal, the starter and pudding I will share with you later in the week but for today’s post, as a special kick-off to December I’m kicking off with the big moment… the turkey 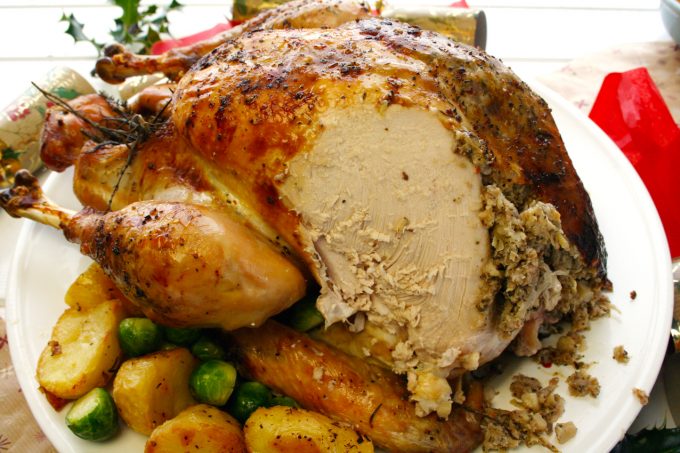 I really do love turkey and I’ve never really had an issue with it drying out. I’ve used this method – placing the stuffing under the skin on the breast, to great success as it keeps the breast meat really succulent. You’ll need to watch it though because it does tend to brown quicker that the rest of the skin, so you can cover it with foil whilst the rest of the turkey is browning. I used my standard fan-assisted oven for the roasting, leaving the tall oven in my Leisure Range Cooker to do all the veg.

Now, when I took on the commission from Leisure I hadn’t really thought how impossible a task it would be to buy a fresh turkey in October!  I searched every butcher in our local town and all the major supermarkets but none could be found… In the end I had to plump for a frozen bird which i’ve never done before but I have to say that other than the two year period it took to defrost it was deliciously moist and I do wonder if the freezing helped?

I prepped my turkey and stuffing the night before, wrapped it in foil and placed the whole thing in the fridge… if you do this, don’t forget to take the bird out of the fridge and let it come to room temperature before roasting… 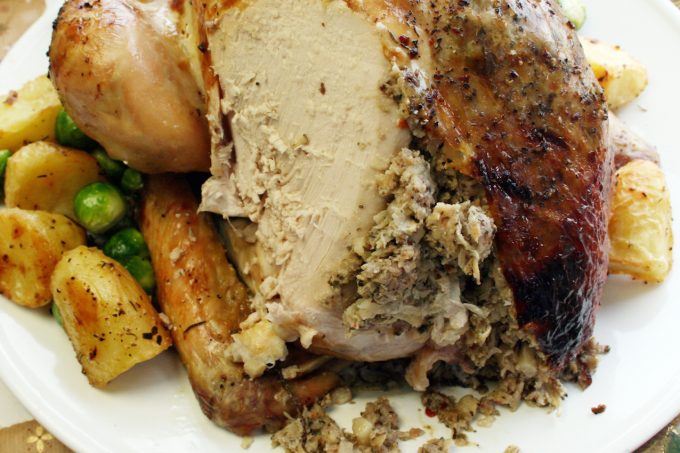 For the Pork, Apricot, Sage and Onion Stuffing

place a large pan on a gentle heat and melt a little oil and butter, add the onions and sauté for about 5 mins until soft, then add the apple and 2 teaspoons of dried sage, stir it all together and let it sweat for another 5 mins – set aside to cool

in a large bowl combine the sausage meat, breadcrumbs and the cooled cooked onions until well mixed – set aside

For the Turkey – feeds 8

you will need a large roasting tin, big enough to take your turkey and of course fit into your oven – line the tray with foil leaving a large overhang – long enough to wrap over your turkey.

Lay all the chopped veg into the bottom of the roasting tray.

Wipe the turkey inside and out, with kitchen paper, and place it on a board, with the neck end towards you. Find the edge of the skin that’s covering the turkey’s breasts and gently peel it back. Work your fingers and then your hand under the skin, freeing it from the meat. If you’re careful you should be able to pull all the skin away from the meat, keeping it attached at the sides. Wiggle gently making sure you don’t make any holes. Lift the loose skin at the neck end and spoon the stuffing between the skin and the breast, tucking the flap of skin underneath to stop anything leaking out. Pop the orange into the cavity.

Weigh the stuffed turkey and calculate the cooking time (about 20 minutes per 500g/1lb 2oz).

Place the bird on top of the veg in the roasting tray, rub it all over with olive oil and season well. Cover with tinfoil and place in the preheated oven. Turn the heat down right away to 180°C/350°F/gas 4, and roast for the calculated time, or until the juices run clear from the thigh if you pierce with it a knife or a skewer. Remove the tinfoil for the last 45 minutes to brown the bird. Carefully lift the turkey out of the tray and rest on a board that’s covered loosely with foil for at least 45 mins.

When the resting time’s nearly up, skim the surface fat from the roasting tray and add the flour and stock. Place the tray on the hob and bring to the boil on a high heat. When the gravy starts to thicken, strain it into a bowl.

To begin, let’s chose a potato… Heston would chose The Maris Piper, Delia would go for Desiree, my mum always goes for something with a red skin. Today I’ve found some red-skinned Lincolnshire potatoes. Rather generic sounding I agree but un-washed and in the paper bag they look like they’ll do the trick! I go for 4 potatoes per person.

Next, I line my shallow roasting tin with foil and drizzle a thin layer of vegetable oil into it and place it on the top shelf of my hot oven…

(a note on vegetable oil… please try and use a specified oil…rapeseed, sunflower etc… there is a massive worldwide problem with palm oil which is used in almost everything from margarine to soap and you need to make sure of the ingredients in your products… huge swathes of rain-forests are cut down every year for palm oil plantations and they are bad… if it doesn’t specify the name of the oil, then don’t buy it… palm oil is usually listed as just ‘vegetable oil’)

Now, fill a large pan with water, chuck in a pinch of salt and bring it to the boil.

Peel and cut the potatoes. I like large roasties, so, depending on size of the original i usually cut mine into 3rds.

Boil the potatoes until just before soft (really depends on size)… you don’t want them to collapse. My grandma used to time this so that they were just about to fall apart and then lower each one gently into the roasting pan!

Next, I drain the water from the potatoes but leave them in the pan and add a glugg or two of extra virgin olive oil, plenty of salt and pepper and a handful of fresh rosemary, then I place the lid back on the pan and violently shake the potatoes to fluff up the flesh.

Then, they go into the hot oil in the roasting pan and into a very hot oven until golden and crispy 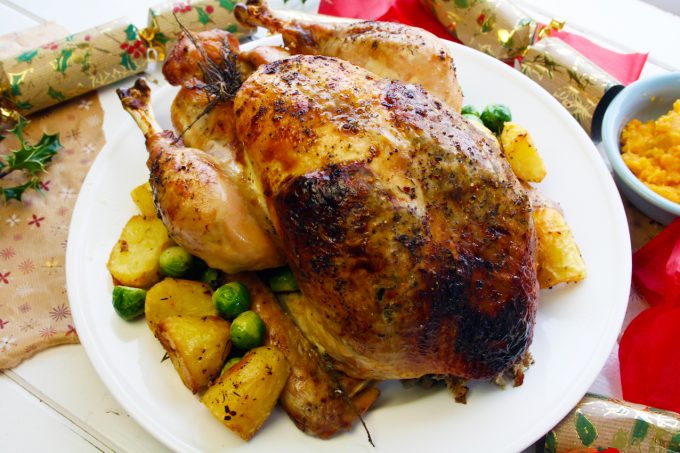