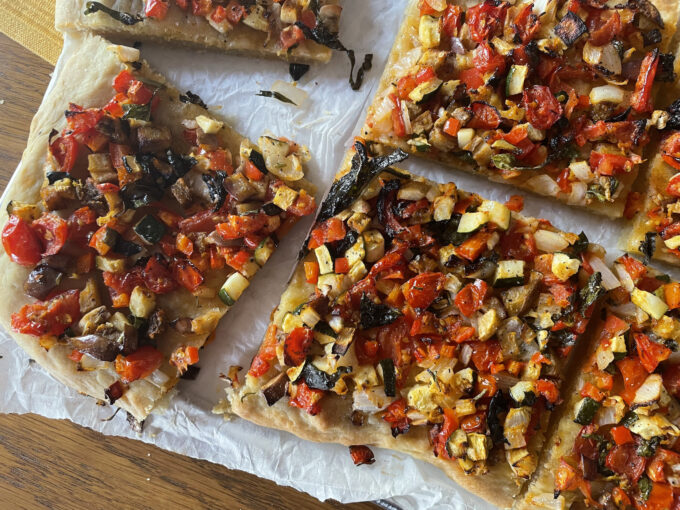 Coca de Verduras is a classic Mallorquian ‘pizza’ style dish that can be found in any of the hundreds of El Forna bakeries dotted around the island.  Its literal translation is Vegetable Cake but this ‘Mallorcan Pizza’ as it’s commonly known is one of those basic classics that seems to have been around for ever and is just so delicious and unbelievable simple to make.

For me it’s all about the pastry base which is a simple olive oil dough made with sparkling water or ‘aqua con gas’ as they say on the island.  The bubbles in the carbonated water give the dough a light and fluffy texture whilst the olive oil adds richness and makes the base almost biscuit-like in it’s texture and flavour.

For the coca crust

For the veg topping

Place half the flour into a bowl. Add the olive oil, sparkling water and salt. Mix with your hands or a spoon until the dough starts to come together.

Add more flour a little at a time, until the dough is no longer sticky. This may require a little more or less than the amount stated. Form into a dough ball but this dough doesn’t need leavening so you’re going to use it straight away.

Press dough evenly onto parchment paper on cookie sheet in a rectangle shape.

Bake the crust for 15 minutes or until top starts to turn golden.

Whilst the crust is baking, place all the chopped veg, seasoning and a tablespoon of oloive oil into a large bowl and toss together.

Remove the crust from the oven when golden. Increase oven temperature to 200c.

Lay the veg on top of the crust and pop it back into the oven for another 15 – 20 mins.

Remove from the oven and drizzle it with more olive oil and a final sprinkling of salt.

Traditionally the coca is served cut into squares. 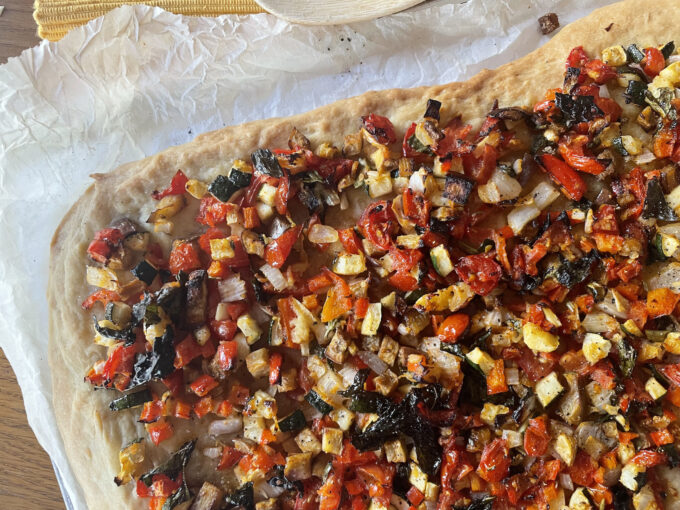 For more Spanish and Mallorquin inspired recipes, check these out on Dom in the Kitchen