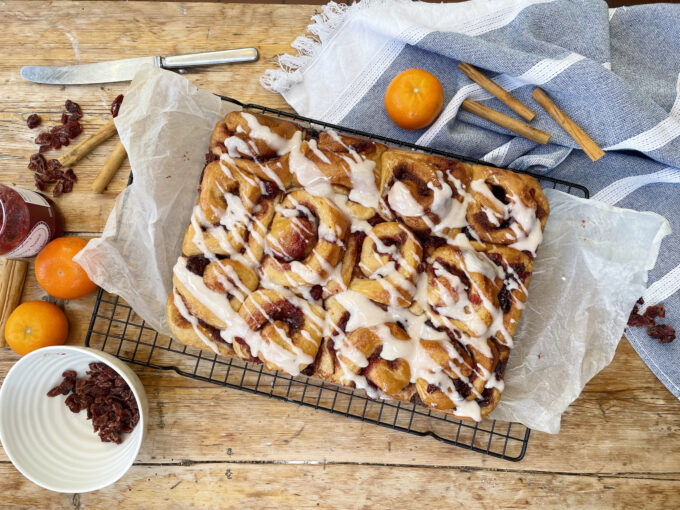 This blog post is a paid partnership with the Cole & Mason who have the loveliest site selling all things ‘seasoning’ related.  The original post for Cranberry and Cinnamon Swirl Buns appears on their site.

My Christmas take on the classic Chelsea Bun have become something of a seasonal tradition here in Belleau and these Cranberry and Cinnamon Swirl Buns are a wonderfully festive interpretation. In past years I’ve used mincemeat as the filling which is a pretty obvious, albeit delightful twist.  This year i’ve simply used a jar of my favourite cranberry sauce, spread on top of a layer of cinnamon butter.  The dough is an enriched bread dough with sugar and eggs, so you will need patience with this recipe, but I promise you that the delicious rewards far outweigh the effort. 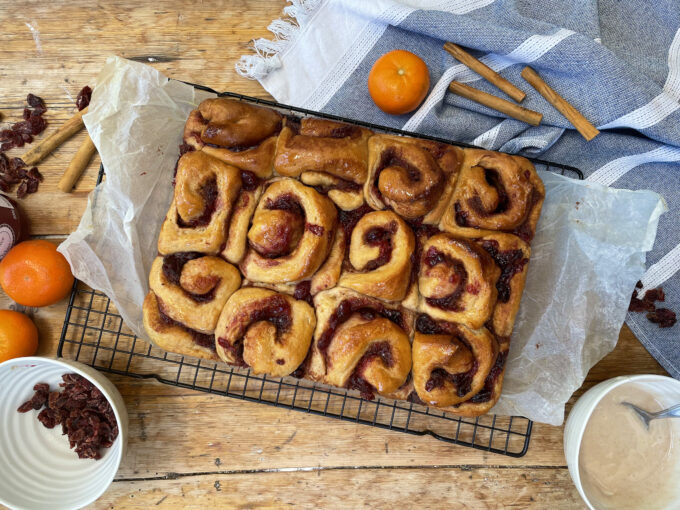 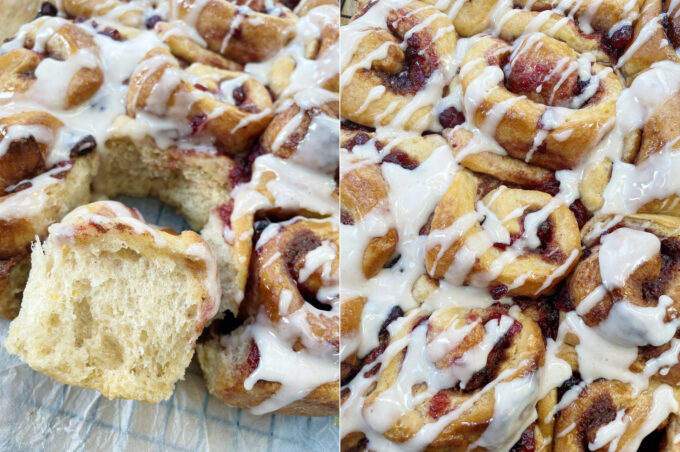 Christmas spices are what makes the festive food really zing and for me cinnamon is the kind of the seasonal spice. The guys at Cole & Mason have the most brilliant Cambridge 20 Jar Herb & Spice Rack Carousel  which would make this dish really easy to create and would of course make the most perfect foodie gift!

Start with the dough – put the flour, caster sugar, salt and yeast into a large bowl and set aside. Put the milk, butter, clementine zest and cinnamon into a small saucepan and cook over a low-medium heat until all the butter has melted. Set aside until just lukewarm.

Make a well in the middle of the flour mixture, then pour in the milk mixture and add the egg. Mix with your hands to form a rough, soft dough. Tip out onto a lightly floured work surface and knead for about 10-15 minutes until smooth and elastic. (I did this in my stand mixer, using the dough hook on low speed for 10 minutes.) then put the dough in a lightly greased bowl and cover with cling film. Leave it to rise for about 1-1½ hours or until it has doubled in size.

Meanwhile make the cinnamon butter filling by lightly beating the butter, cinnamon and brown sugar until you have a rough paste.

Once the dough is risen, tip it out onto a lightly floured work surface and use a rolling pin to roll into a 40cm x 50cm rectangle. Using a spoon or spatula, spread the cinnamon butter in an even layer across the entire surface of the dough, then spread the jar of cranberry sauce over the cinnamon butter. Top with a sprinkling of dried cranberries and gently press with your hand to secure in place.

Roll up the dough into a cylinder along the long edge, keeping the spiral tight. Using a sharp knife, cut into 12 even slices.

Grease and line a baking tin roughly 20cm x 3cm and arrange the buns snugly in the base. Cover the tin with cling film, set aside and allow the buns to prove for 45-60 minutes until risen and puffy.

While the buns are proving, heat the oven to 180°C. Once proved, bake the buns for 25-30 minutes or until golden brown. While the buns are baking, prepare the glaze: put the milk and caster sugar in a small pan, then bring to the boil over a low heat. Remove and allow to cool. 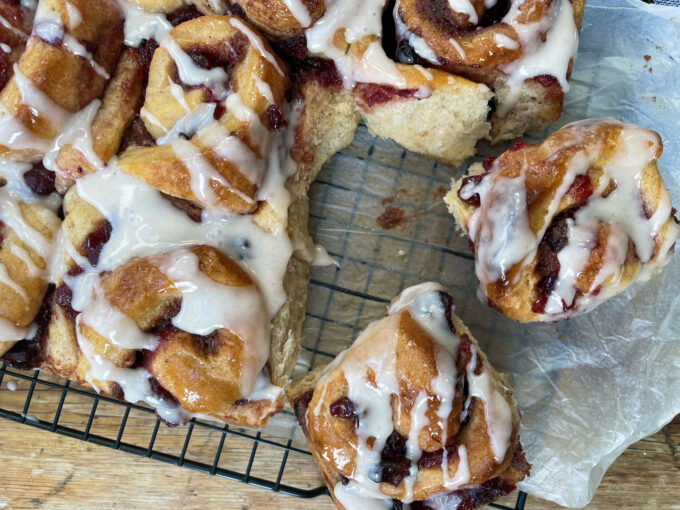 Check out Dom in the Kitchen for more festive recipes