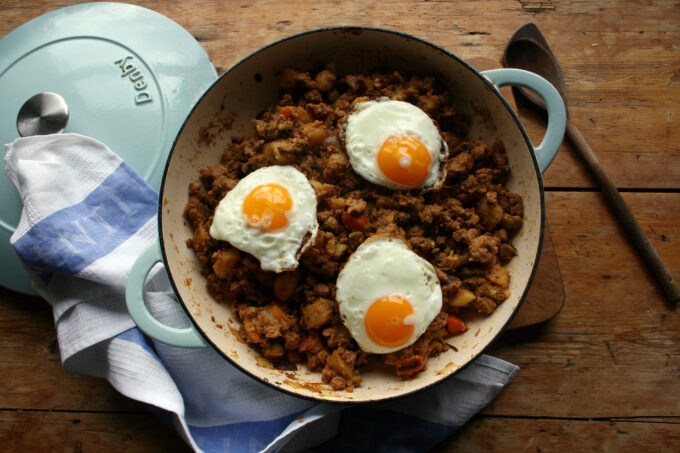 According to Premier Foods (the clever people who provide the UK with such delights as Bisto Gravy and Bird’s Custard) the sales of ‘comfort foods‘ went through the roof during lockdown.  Their boffins surmise that in troubled times we turn to foods that we remember from our childhoods and foods that bring us comfort.  Which is why I’ve made this Quorn Beef Hash with fried eggs – the ultimate veggie brunch.  Anyone old enough to remember, or have grandparents who will tell them, corned beef hash was one of those war-time foods that was very popular.  It used corned beef, which was a salted beef that came in a can and potatoes and could make a very tasty and more importantly, filling meal.  It’s popularity continued well after the war but has obviously waned in recent decades. That is until lockdown when we’ve all had to be more inventive in the kitchen.

I’m pretty much a vegetarian (I say pretty much because it’s not really something I’ve ‘declared’ but I’ve only eaten meat 3 times since NYE 2019 so I’m feeling pretty happy with that…) so I’m doing a version without the meat but using the brilliant Quorn Mince which not only tastes lovely but also allows me the clever use of the phrase Quorn Beef Hash.  The Viking will insist this is something he came up with and to be honest he did.  He is a genius wordsmith. I’m serving it with fried eggs on top because its a sensational breakfast or brunch dish for a veggie. 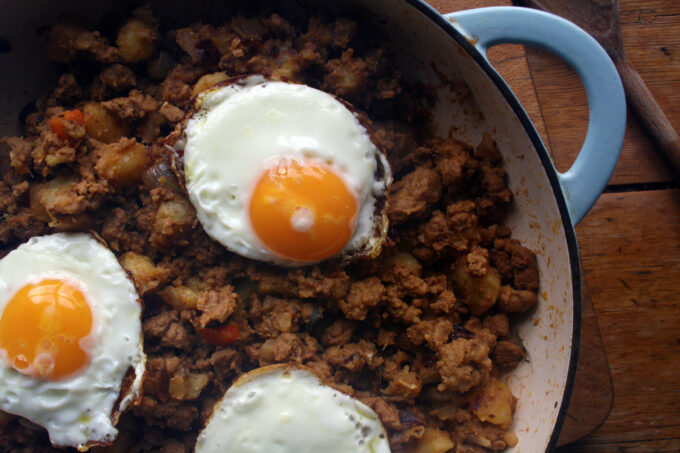 I used my shallow cast-iron casserole dish with a lid but actually ended up transferring the whole thing to a non-stick frying pan with a handle so I could ‘chef-toss’ it.  Either would work but you know your pans and you want a pan that will allow the potatoes to crisp and brown nicely and sometimes cast-iron doesn’t do this well without a lot of sticking!

Start by par-boiling or par-steaming your veg until beginning to soften.  I prefer the steaming method as they don’t hold as much water afterwards.  They steam for about 7 minutes.

In a large frying pan, melt some butter and a little olive oil and sauté your onions until soft and beginning to colour, then add the garlic and fresh chopped herbs and gently sauté for a few more minutes.  Add the steamed vegetables, turn up the heat and sauté for at least 15 minutes, tossing frequently, until the veg have a gloriously golden crispy outside.  I like to leave them in the pan for 5 mins and risk a bit of burning before tossing them around and leaving them again.

Add the mince, a tablespoon or two of veg stock and the mustard and sauté until the mince ins cooked through.  For a really crispy finish, transfer to an hot oven (without a lid) for 10 mins whilst you fry some eggs. (You may need to add a tablespoon or more stock to stop it becoming too dry. (probably won’t need to do this if using real meat.)

A little tip on frying eggs that have that wonderful crispy edge but soft centre – I use olive oil and get the pan and oil really hot before dropping the eggs in.  I leave them for a minute or two (for the whites to turn white) and then turn the heat down to the lowest until the egg is cooked. 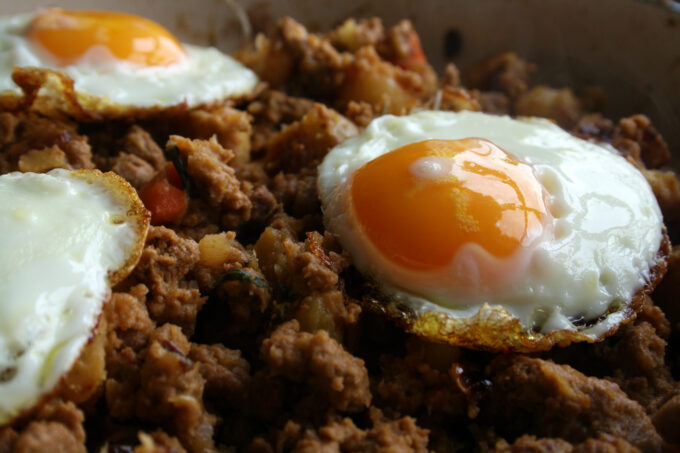 Serve with the eggs on top! Eat and of course, enjoy!