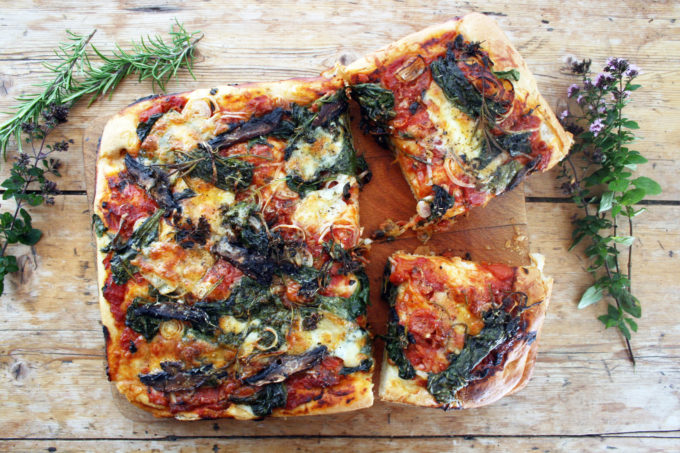 So here’s the thing with this spinach and mushroom deep-pan focaccia pizza.  The Viking LOVES him some Pizza Hut.  And don’t even try and tell him that Domino’s or Pappa’s are better, it won’t wash. I’m sure it’s a working-class, northern thing but as far as he’s concerned these modern, trendy ever-so-thin pizzas are vile, floppy things that are not pizza and essentially taste like burnt wood.  He loves the thick doughy texture of a classic deep pan.  But it has to be The Hut. I think it was the first pizza he ever ate and it’s stuck.  There’s something about the aroma and the cheese.  It’s the whole experience and he goes on about it so much that he’s now got the girls in the office into them!  To be honest, i’m easy.  I really don’t care because usually i’m drunk and any carbs will do.  But I do remember as a young teenager in London going to a Pizza Hut and thinking it was so cool.  Thinking I was so cool to be eating in there. Sophisticated almost.  Well, things were different back in the 80’s.  It was just such a new and revolutionary experience.  They brought the pan to your table and you got a whole pizza to yourself.  Plus the salad bar!  So maybe he’s got a point.

So i’ve made many a pizza here on Belleau Kitchen but they’ve all been your regular thin crust pizza so i’ve been exploring recipes for a deep-pan.  It’s actually pretty basic but it’s the fact that it’s cooked in a pan (doh!) rather than on a stone that gives it that wonderful doughy quality and of course the pan also gives the pizza that iconic golden crunchy crust.  Which got me thinking that it’s essentially a focaccia with cheese and tomato on top!  Genius…

This isn’t the quickest recipe but it’s well worth the bother and the sauce takes the same time as the dough so you may as well be doing something in that time.  Making your own tomato sauce may seem like a hassle but I promise you you won’t regret it, this tomato sauce is just beautiful and so rich.  I’ve gone for a very simple vegetarian topping here too but feel free to go wild! 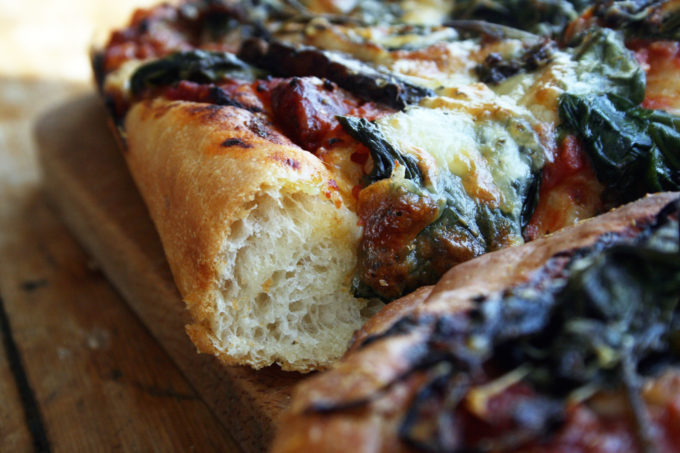 For the tomato sauce

For the ‘pan’ i’m using a 25cm x 33cm metal tray with deep sides.  It’s the tray that came with the oven… but you can use any metal or cast iron pans,  2 x 23cm cake tins or a cast iron shallow casserole dish would work just as well

The tomato sauce and the pizza focaccia dough take roughly the same time to make so start with the dough by placing all the dough ingredients into a large bowl and bring together with a spatula or your hand, tip out onto a lightly oiled surface and knead for 10 minutes.  This can be done with ease (and a lot less bother) in your stand mixer with a dough hook, for the same 10 minutes.  Place the dough in a greased bowl, cover tightly in clingfilm and set aside for at least an hour or until the dough has doubled in size.

To make the tomato sauce, gently heat a large pan and melt some butter and olive oil, then saute the onions, celery and garlic gently for 5 mins, then add the fresh oregano (or the first amount of dried) the sugar and salt and let it all sweat for a further 5 minutes, then add the rest of the ingredients (except the dried oregano) and stir well.  Place it on the lowest heat and let it gently plop and bubble away for at least an hour.  After half an hour stir in the dried oregano.

Once the dough has doubled in size, remove the cling film and knock it back by punching it with your fist, then place it into the oiled pan and smoosh it around with your fingers till it fills the space, cover with a tea-towel and set aside for 30 mins.  It will rise again but as it’s flat it won’t seem as prominent

The tomato sauce should be ready so take it off the heat.  Slice your vegetables very finely and prepare you mozzarella and cheddar cheese. Wilt your spinach – this can be done is a warm pan with a dash of water or easily in the microwave.

Remove the clingfilm from the pizza pan and press your fingers into the dough much like you would with a focaccia.  Then add the sauce, spreading it around but leaving a generous edge for the crust, add the mozzarella (I like to use torn chunks of fresh) and half the grated cheddar and then add the wilted spinach, slices of shallots and mushrooms, then add the rest of the cheddar.  Sprinkle over some more fresh oregano and season well and then bake for 15-20 minutes or until the crust is golden and puffy and the cheese is wonderfully melted. 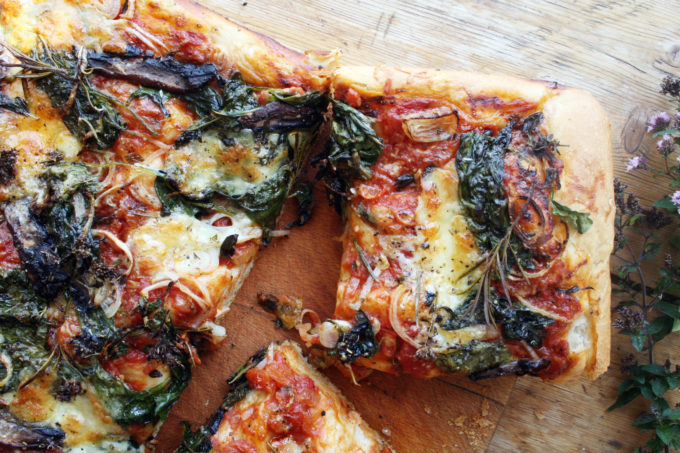