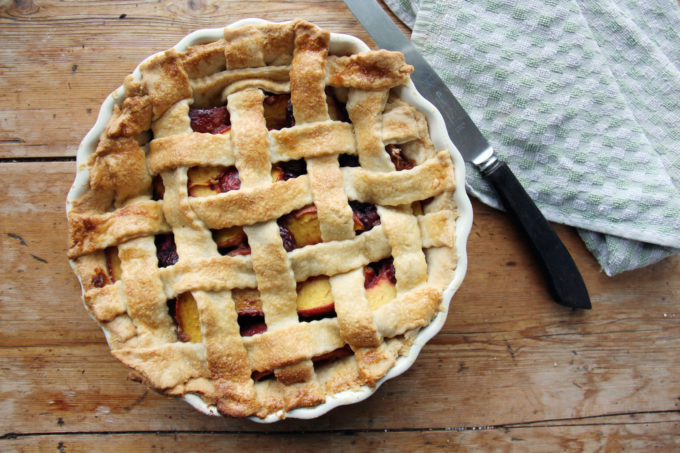 … for many years my mum has come up to the cottage for her birthday.  She loves it here but particularly she loves the beach and more often than not we would spend the day there, with blankets on the sand, windbreakers and deckchairs with enough food to sink the Titanic.  The east coast of the UK is a truly beautiful place with very many award-winning sandy beaches that stretch for miles up the coast and are almost always entirely deserted. Amazingly it’s been four years since she’s come up to celebrate her birthday but this last weekend she came with her husband Eric and we essentially spent the weekend eating and drinking.  We didn’t actually make it to the beach in the end and the weather has turned a little crappy but we did go for an epic walk on Sunday which included me stubbornly dragging them through the overgrowth where we all received second degree stings from nettles, snags on clothes from the brambles, an invasion of frogs and mum in what can only be described as a tumultuous fall into a bush.  They were surprisingly good sports and very sprightly for their combined ages of 152… and we laughed way harder than we should when mum took her tumble.  It sounds mean but of course we rescued her from the undergrowth pretty quickly and we were on our way again, chasing ducks and spotting wildlife.  Sometimes it’s like being with 4 year old kids!  We actually had to ask The Viking to come and rescue us in the end and we’d walked too far.  I’m hoping I haven’t damaged them too much! 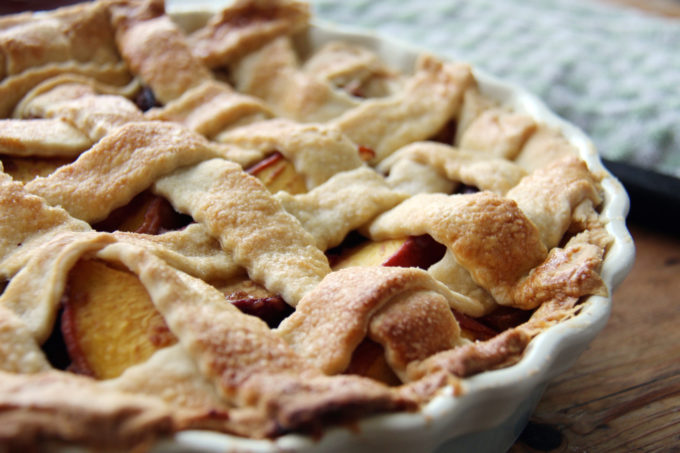 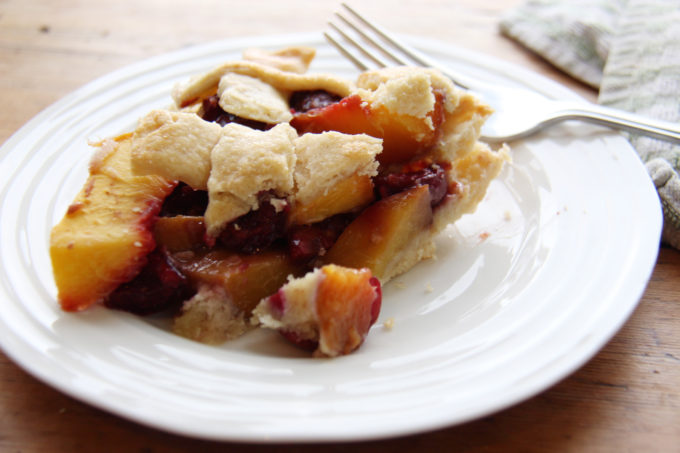 after such a long and exhausting walk a proper Sunday lunch was needed… a chicken was roasted with all the trimmings and pie was made as a substitute birthday cake.  Mum loves stoned fruit such as plums and nectarines and of course peaches and cherries are at their best right now.  This is a very simple pie to make, although if I was making it again I would either slice the peaches thinner or pre-cook the fruit first for a short burst just to get their juices flowing a little more that they did.  Saying that it went down a treat and we served it warm with custard, although as is always my want, I took my slice prior to it being re-heated and served mine cold with cold cream… oh the glory!

I used my 20cm fluted, ceramic pie dish and pre-heated the oven to 180C

make your pastry by adding the flour, ground almonds, sugar and butter into a bowl and rubbing it together with your fingertips until you have a breadcrumb texture, then add the cream cheese, egg yolk and a little drop of milk and get your hand in like a claw and bring the pastry together into a ball of dough.  Flatten it out into a thick disk and wrap in cling film.  Refrigerate for 30 mins

after 30 minutes take the dough out of the fridge and divide it into two even portions, placing one portion back into the fridge whilst you roll out the first portion on a well floured surface… I like my pastry a medium thickness and because this pastry is so damn good you want it to be quite thick!

place all the filling ingredients into a bowl and stir together well (your hands are the best tool for this.)  – I would suggest gently heating this mixture for 5 mins to break down the fruit a little but you don’t have to, you’ll get a more ‘compote’ style filling but just as nice – then pour the whole lot into the pie dish on top of the pastry and let it cool completely.

roll out the rest if the pastry and using a fluted pastry wheel, cut it into strips.  I like my strips quite thick but feel free to be as creative as you like here – depending on the size of your pie dish you’ll need roughly 10 strips but you can always trim and roll again to get the desired amount.   Lay 4 or 5 strips across the pie with wide gaps, then take one strip at a time and weave it over and under the first layer, alternating the ‘over and under’ with each strip as you lay it down.  Trim the whole lot and brush with beaten egg and sprinkle with a little caster sugar

bake for 30 – 40 minutes until the pastry is golden brown. 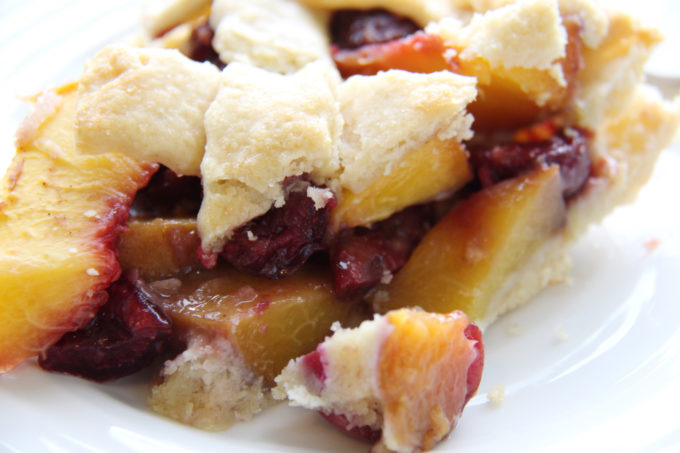