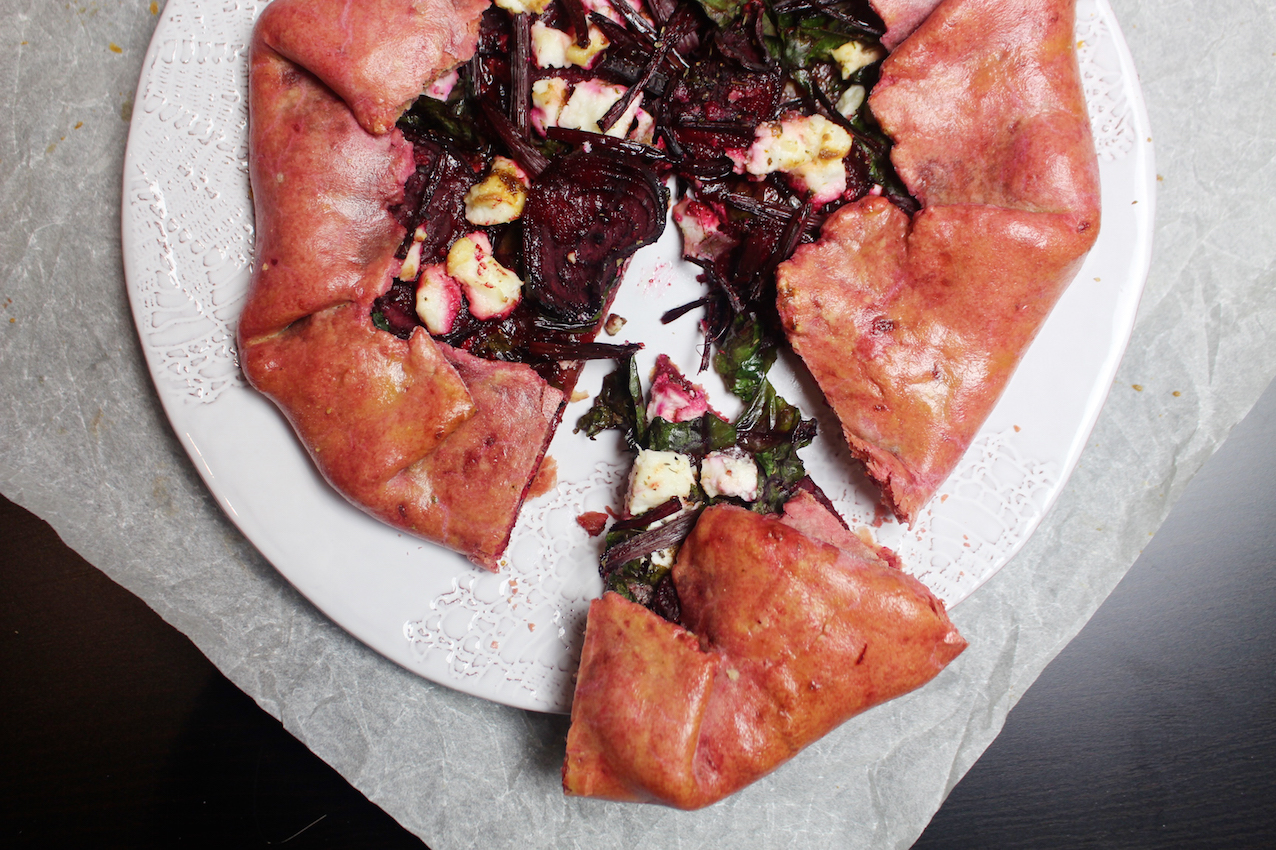 … one of the wonderful things about being part of the blogging community is the knowledge that you’re surrounded by hundreds of other like-minded food lovers who, given the nature of the activity itself, are keen to share their recipes and food ideas.  I try and be as original as I can but inevitably, like us all, I hit a brick wall of creativity once in a while and it takes research, lots of eating – which is never a burden – and the occasional random meeting of a blogger or two to get me back on track.  My recent meeting with Kate from Veggie Desserts was one such occasion with her glorious beetroot pizza  and more importantly her message about eating vegetables from root to leaf.  Root to leaf eating has become hugely popular over the past few years as we all begin to realise that not only is it ridiculously wasteful to throw away so much of the produce but in fact the skins, roots, stems and leaves are often the tastiest part of the vegetable.  I’ve often left skin on potatoes and in particular garlic – mainly out of laziness – but once gently cleaned there’s very little that a hot oven won’t blast away and all that goodness so close to the skin is pure food gold.  Nowadays it takes a pretty big reason to bother peeling any veg and I make choices in the supermarket based on which stems and leaves are still on the veg I buy… in fact when i’m in London and the choice is wider, I tend to avoid the supermarkets altogether and frequent the small grocers that populate the dodgy end of the Harrow Road here in W9.  These shops are a treasure -rove of incredible and occasionally exotic produce and amongst the unusual you’ll also find those ridiculously expensive brands they only sell in places like Whole Foods, where you need to take out a mortgage to shop, at shockingly cheap  prices… anger-inducingly cheap in fact… but that may be a story for another day.  They also seem to know their veg very well as they’re catering for a myriad of communities and therefore tastes.  This morning I ruffled through the beetroot looking for the fattest tubers, longest stems and leafiest leaves… it’s quite possible they think i’m mad but I’m not ashamed to go back and root again for such beautiful produce… 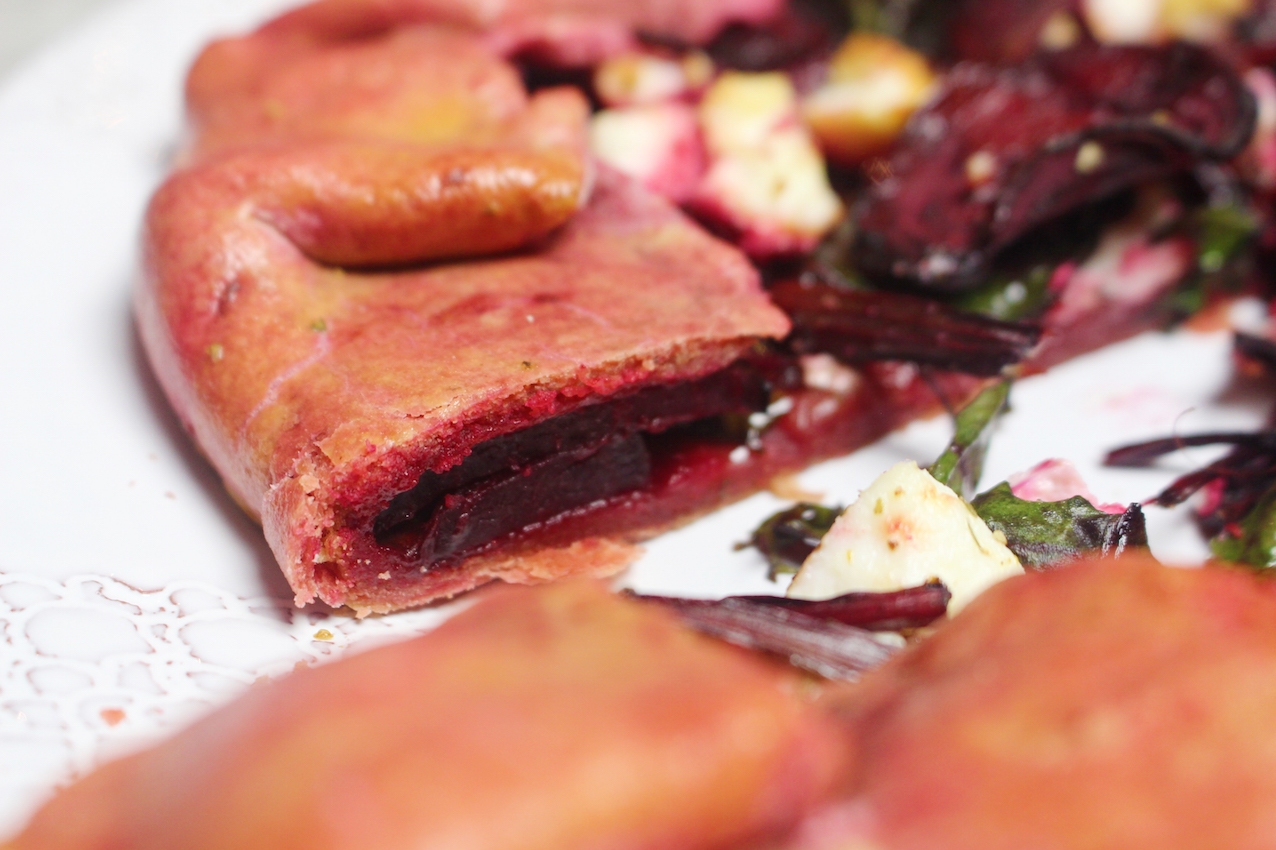 beetroot and manouri goats cheese galette
and whilst we’re shouting out to those who have inspired us, I must shout out to Karen from Lavender and Lovage who quite frankly, is the galette queen…  I totally get it.  They’re so easy to knock together… like a cross between a pizza and a pie they have everything going for them and are not only totally delicious but rather pretty looking too.

So it seems like there’s quite a bit going on here but in fact it’s mostly beetroot… I am of course using the most familiar part of the vegetable, the swollen red root itself, skin on and sliced very thinly as it’s baking in the oven is it’s only cooking… then i’m using the leaves, which have a spinach-like texture and taste, which i’ve chopped and also the stems which a beautifully sweet and crunchy.  I’m layering these with some divinely creamy manouri goats cheese which is a lesser-known Greek cheese and is essentially a by-product of Feta.  It’s less salty than feta and much creamier and it’s a discovery i’m very pleased about… 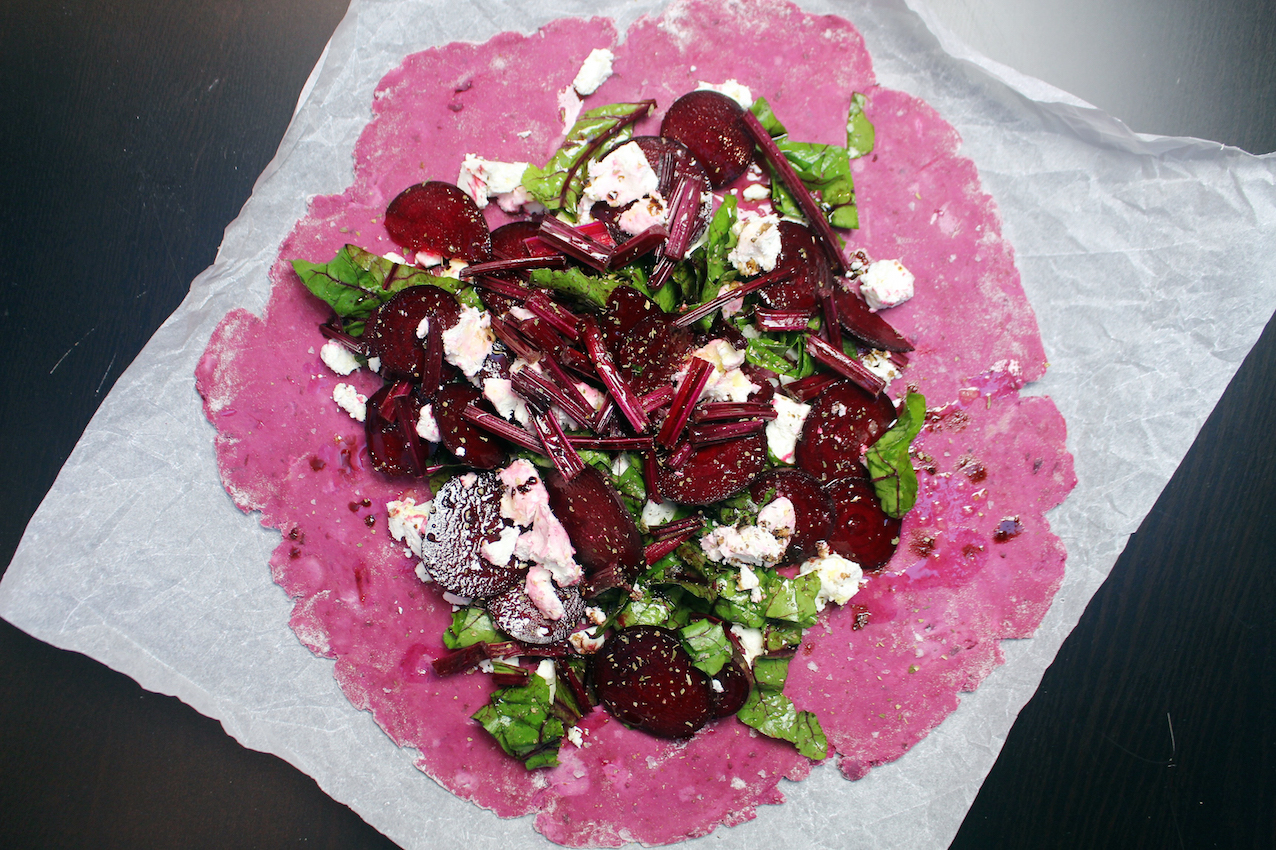 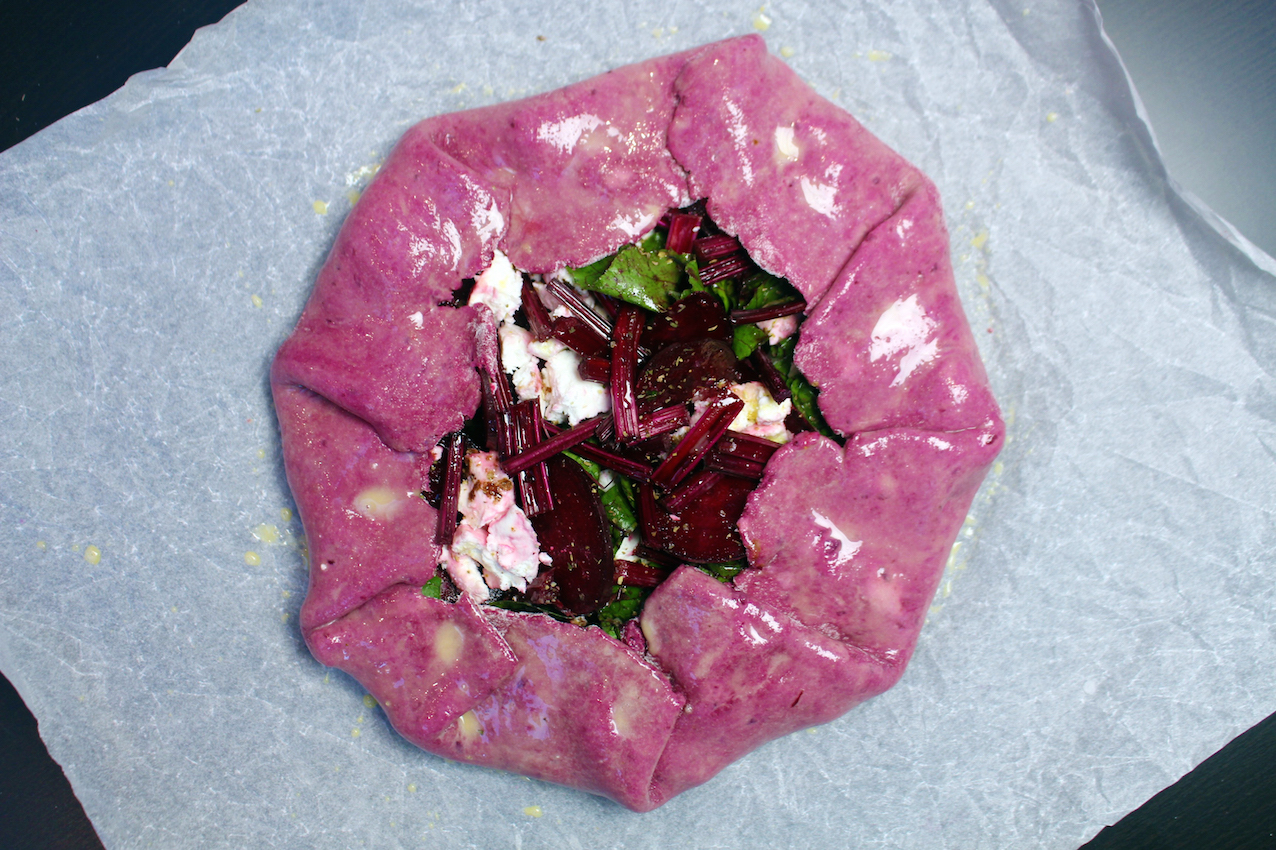 for the filling
one bunch of fresh beetroot with stalk and leaves on
100g manouri or regular feta goats cheese
olive oil
balsamic vinegar
fresh thyme, oregano and rosemary

to make the pastry, start with the ‘pink’ element which is the cooked beetroot which you should boil in water till soft then whizz to a pulp with a stick blender and then set aside (you could totally cheat here and use pre-cooked beetroot)

sieve the flour into a large bowl, add the butter and rub it into the flour, raising your hands high as you do to allow plenty of air to get into the flour until you have a rough breadcrumb texture

add two tablespoons of the beetroot puree and using one hand shaped like a claw begin to stir the flour and butter together, it should start to come together into a dough but you may need to add a dash more of the puree to bind it together, knead it well so that the pink is evenly distributed but do this fast as you don’t want the flour to be tough

once the dough is formed, tip it out onto some cling film, pat it out into a flattish disk, wrap it up and pop it in the fridge for 30 mins

once the dough has had time to rest, roll it out on a well-floured surface.  Try and keep the shape as round as you can and the dough not too thin… I rolled it to the size of a large dinner plate… then lift it carefully onto the prepared baking tray where you will build the galette

you can add whatever you please to your galette, leaving a large edge of pastry all the way around… I started with a layer of chopped beet leaves, then some crumbled cheese, then the thinly sliced beetroot and then more chopped leaves… I added plenty of fresh torn herbs, salt and pepper and drizzled it all with extra virgin olive oil and a dash of balsamic vinegar

now, begin to fold the edges of the pastry over into the centre, pushing down firmly as you go round… this should leave you with the familiar and rustic looking galette shape which you can now brush with a little beaten egg and milk 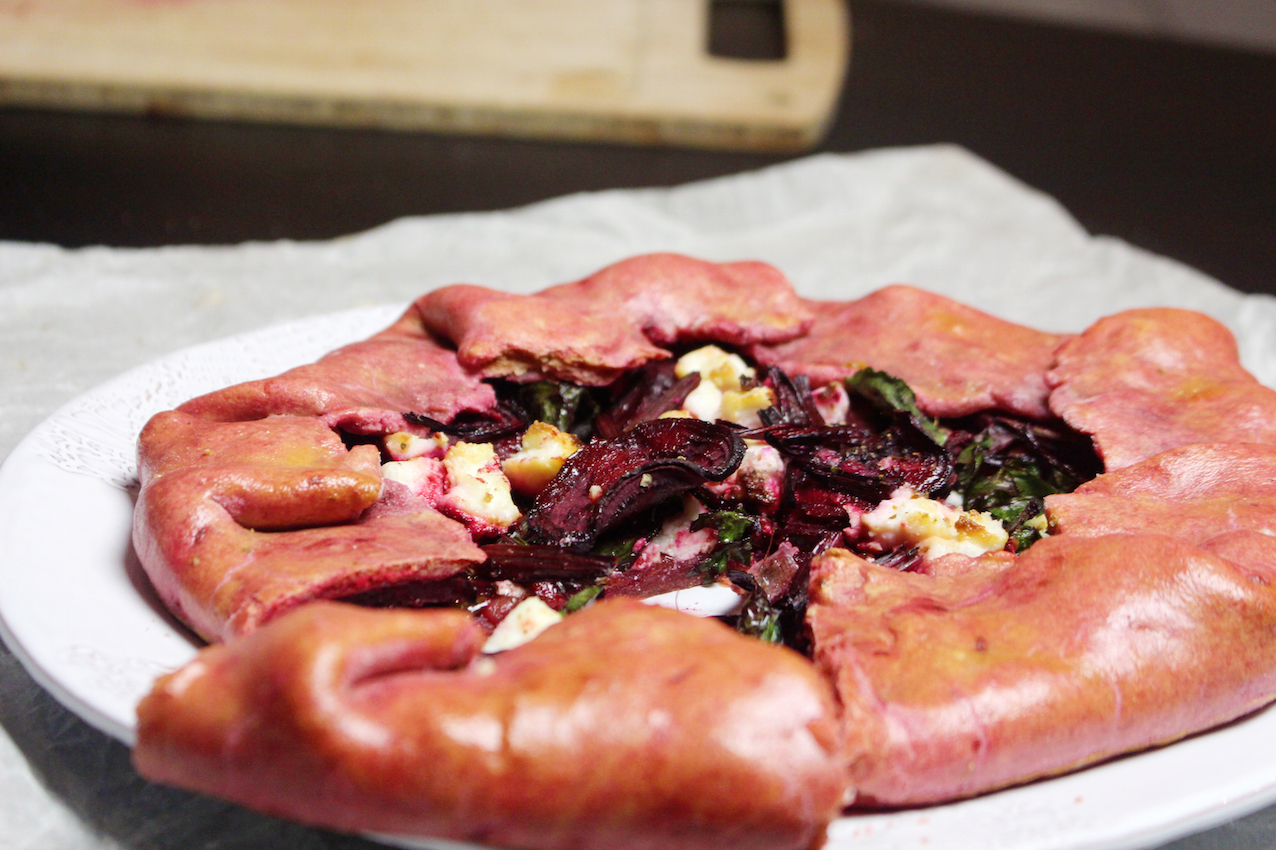