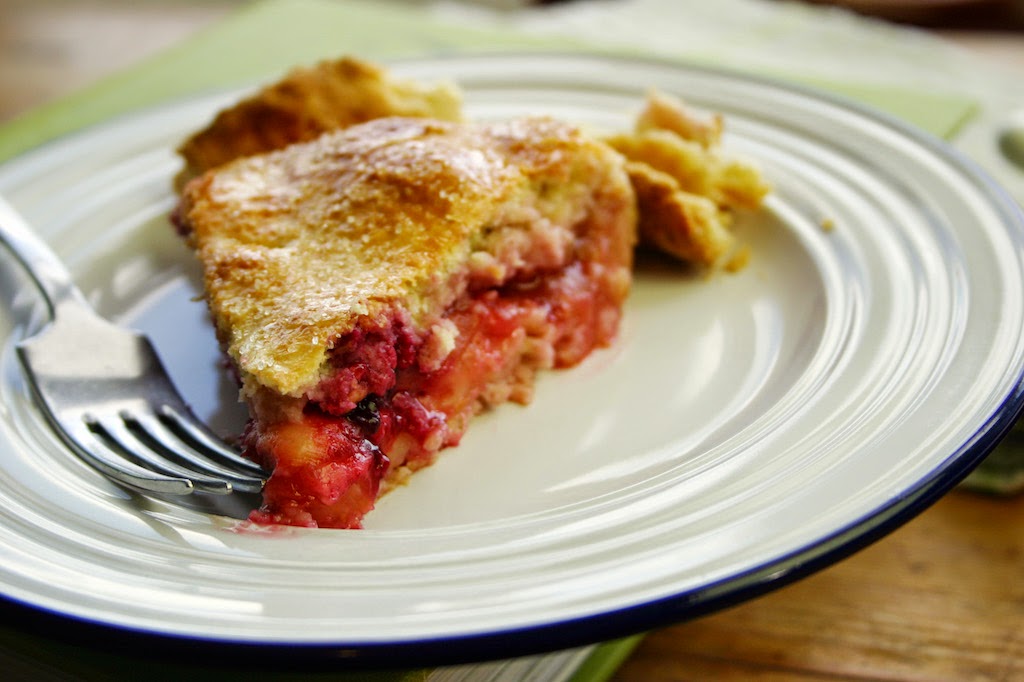 … it does’t happen very often any more but I love it when the seasons catch you by surprise… one moment you’re stewing pumpkin in the slow-cooker or defrosting summer fruits for pie and the next minute you notice the neighbours rhubarb bush is in full growth and it’s time to start thieving… I mean asking very sweetly if you can ‘borrow’ some rhubarb.  Sometimes it’s like living in nature’s larder  – imagine me skipping like the Easter bunny around the fields plucking wild garlic from river banks and wild berries from the hedgerows… and of course at other times it’s like being stuck in nature’s freezer when there’s nothing anywhere but the barren landscape and only a trip to the local supermarket will suffice.  It’s not quite as Edwardian as it sounds, it’s not like we have to saddle up a horse and cart or anything, although now I mention it… 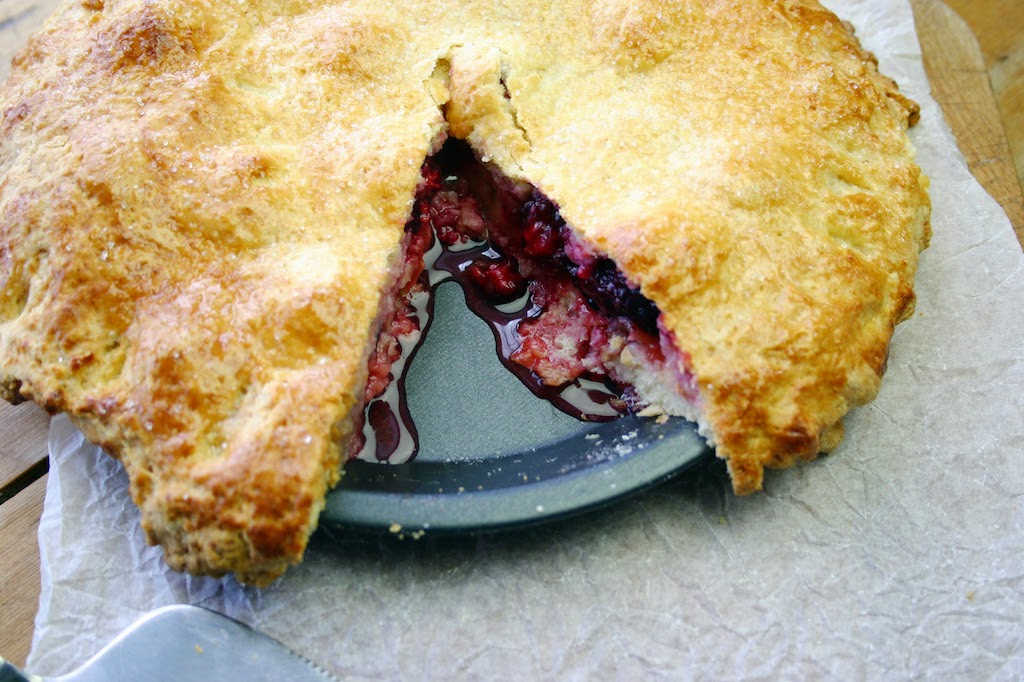 rhubarb and blackberry country cake
I was searching for rhubarb recipes at the weekend.  I wanted to do something a little homemade and rustic and Darina Allen’s brilliant Forgotten Skills of Cooking came to the rescue.  I love this book.  I feel that in another life I could have written these recipes.  They are so homely and basic yet so beautiful and tasty and ‘from the land.’… and she’s right about the many recipes being forgotten.  Some classics gently disappear from the table because they’re not seen as trendy and this is a crying shame… this cake which is more like a pie is just a ridiculously simple recipe with a gorgeous fluffy pastry made good by using soured cream or sour milk.. the pastry is so much like a scone that I may in fact use it as a scone recipe next time… oh and i’ve added some blackberries to my pie cake just because they were in the fridge. 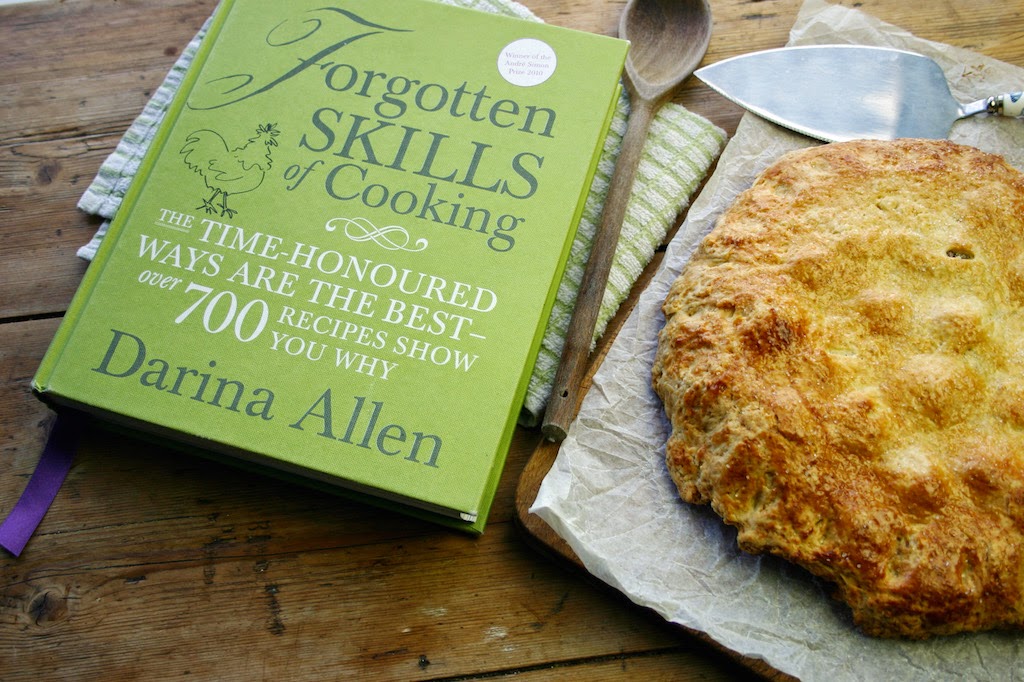 as an aside, it’s frustrating when a cookbook, for whatever reason gets a recipe and method wrong and it’s even more frustrating when it’s a recipe such as this which is obviously a family recipe passed down the generations… you have no come-back other than the fact that you’re left staggering at how odd the measurements are and even though you’re attempting to follow the recipe and method to the letter it’s glaringly obvious that it’s not going to work… now this is quite a simple dish so it was easy to see that the given weight for rhubarb of 700g was way too much but the suggested hour in the oven at 180C really got my goat because that would have clearly ended in burnt pastry and a wasted bake.  I’m not saying i’m perfect but then i’m not Darina Allen…

a pinch of salt
1/2 teaspoon bicarb
50g caster sugar
75g butter
1 egg, preferably free range and organic
165ml milk, buttermilk or sour milk – I actually used some left-over soured cream mixed with milk
700g rhubarb, finely sliced – I used just under 400g
150g blackberries
egg wash made from a beaten egg and milk
175-225g granulated sugar – I actually only 150g because I like my rhubarb tart
caster sugar for sprinkling
1 x 25.5cm (10 inch) enamel or Pyrex plate (I actually used a flat pie plate)
preheat the oven to 180C
sieve the flour, salt, bicarb and caster sugar into a bowl and then rub in the butter until you have breadcrumbs
whisk the egg and mix with the buttermilk or soured cream then make a well in the centre of the dry ingredients and pour in most of the liquid and mix to soft dough, add the remainder of the liquid if necessary.
sprinkle a little flour on your work surface, turn out the dough and pat gently into a round. Divide into two pieces and set one aside.  Roll out one piece of dough and place it onto the pie plate but don’t trim it.
scatter the finely chopped rhubarb all over the base, egg-wash the edges and sprinkle the rhubarb with the granulated sugar.
roll out the other piece of dough until it is exactly the size to cover the plate, lift it on and press gently to seal the edges. I don’t bother to trim because I love all that golden crust but feel free to neaten it up as you like… Make a hole in the centre for the steam to escape, egg-wash and sprinkle with a very small amount of sugar.
bake for 35 to 45 minutes or until the rhubarb is soft and the crust is golden. Leave it to sit for 15-20 minutes so that the juice can soak into the crust. 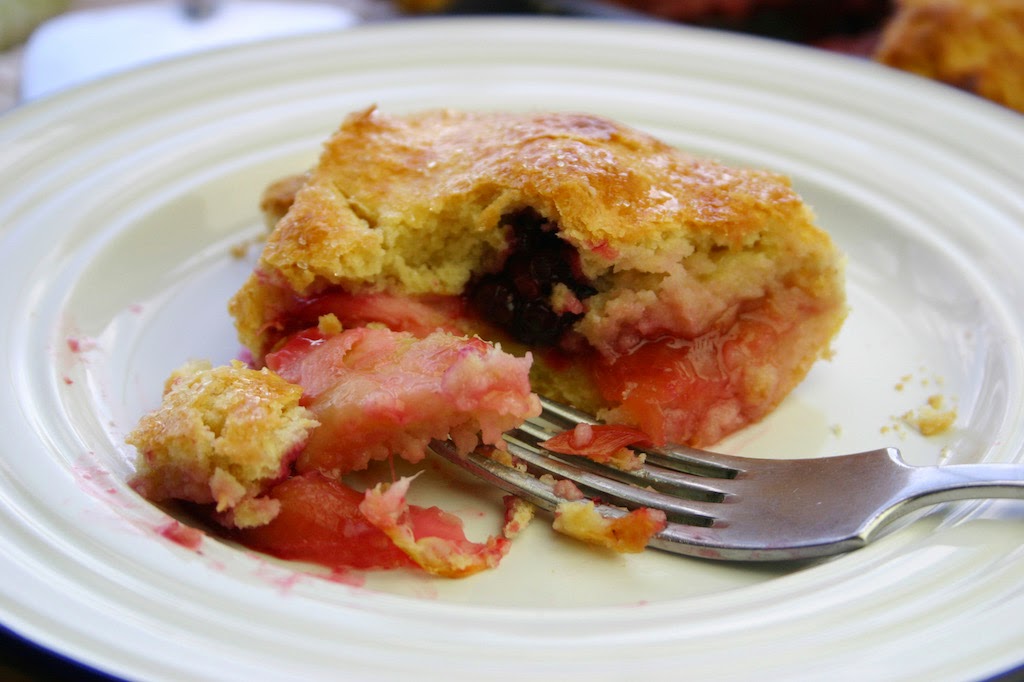