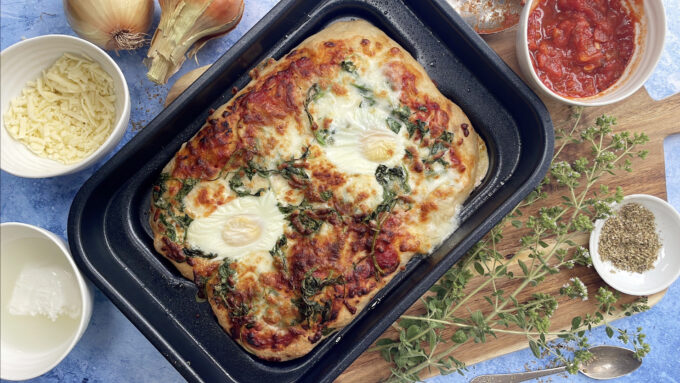 When I was younger and Pizza Express was the ‘new kid on the block’ my favourite pizza was the Fiorentina.  An egg.  On a Pizza.  What?!?! It blew my mind.  Pizza was tomato sauce and cheese, with maybe some slices of pepperoni but an egg and spinach.  That was something else, radical almost. But it became a firm favourite and I’m sure I thought I was all kinds of extraordinary as I ordered my egg pizza.

This Air Fryer Fiorentina Pizza is a tribute to that very pizza.  I’ve gone for a more rustic approach and my dough is a little more focaccia than thin crust but  felt that worked better for the air fryer.  I’ve also used one of those salad bags of watercress, rocket and spinach instead of just spinach for the top and it worked really well. 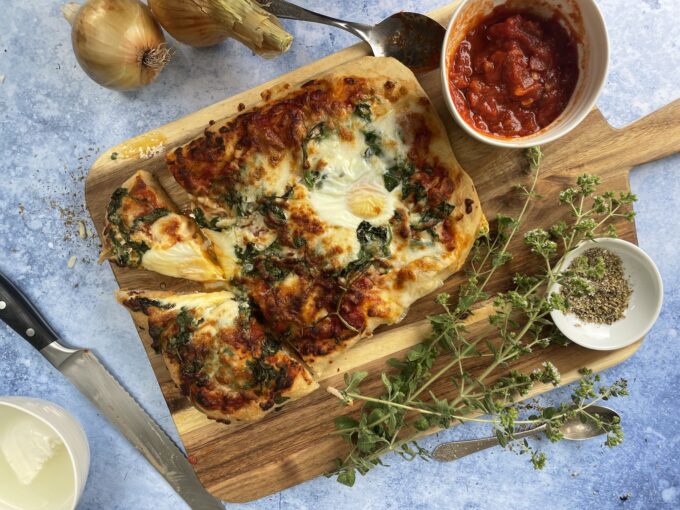 I’m using my Haden Multi-Pro Health Grill & Air Fryer.  Hit the ‘pizza’ button to preheat.  Keep the temperature the same but reduce the timing to 20 mins. I’m using the pan that comes with the air fryer which I’ve sprayed with olive oil.

For conventional cooking, id use a 25cm x 33cm metal tray with deep sides.  It’s the tray that came with the oven… but you can use any metal or cast iron pans,  2 x 23cm cake tins or a cast iron shallow casserole dish would work just as well 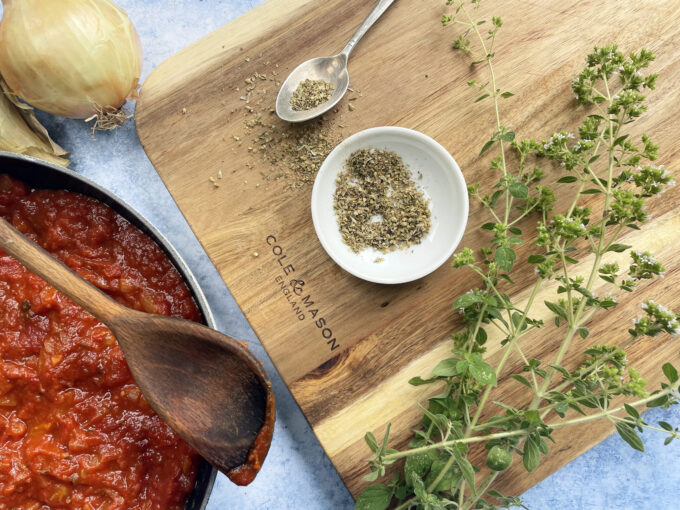 The tomato sauce and the pizza dough take roughly the same time to make so start with the dough by placing all the dough ingredients into a large bowl and bring together with a spatula or your hand, tip out onto a lightly oiled surface and knead for 10 minutes.  This can be done with ease (and a lot less bother) in your stand mixer with a dough hook, for the same 10 minutes.  Place the dough in a greased bowl, cover tightly in clingfilm and set aside for at least an hour or until the dough has doubled in size.

To make the tomato sauce, gently heat a large pan and melt some butter and olive oil, then saute the onions and garlic gently for 5 mins, then add the fresh oregano (or the first amount of dried) the sugar and salt and let it all sweat for a further 5 minutes, then add the rest of the ingredients (except the dried oregano) and stir well.  Place it on the lowest heat and let it gently plop and bubble away for at least an hour.  After half an hour stir in the dried oregano.

Grease your pizza pan liberally with olive oil and turn the oven on to 200C if using a conventional oven or pre-heat your air fryer as above.

Once the dough has doubled in size, remove the cling film and knock it back by punching it with your fist, then place it into the oiled pan and smoosh it around with your fingers till it fills the space, cover with a tea-towel and set aside for 30 mins.  It will rise again but as it’s flat it won’t seem as prominent

The tomato sauce should be ready so take it off the heat.  Wilt your spinach – this can be done is a warm pan with a dash of water or easily in the microwave.

Remove the clingfilm from the pizza pan, then add the sauce, spreading it around but leaving a generous edge for the crust, add the mozzarella (I like to use torn chunks of fresh) and half the grated cheddar and then add the wilted spinach, then add the rest of the cheddar.  Sprinkle over some more fresh oregano and season well and then bake for 15-20 minutes or until the crust is golden and puffy and the cheese is wonderfully melted. (If using the air fryer, bake for 20 mins but check after 15.)

For more pizza recipes check out these on Dom in the Kitchen.