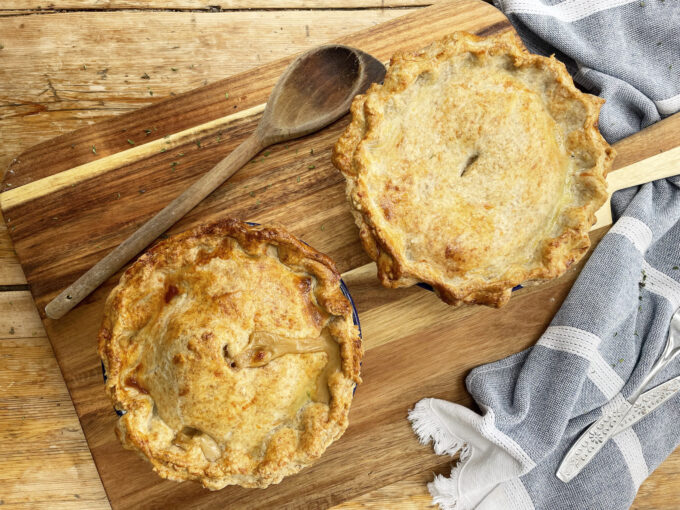 This Wild Garlic and Wild Mushroom Pie with a Cheesy Rye Crust is one of those last minute pies that came together ridiculously quickly but just worked so well on so many levels.  Firstly the wild garlic.  It is of course wild garlic season and like most foodies, I’m crazy for the stuff.  It is so delicious with its mellow garlic flavour and so adaptable to so many recipes. I think I also love the fact that it’s a wild growing plant that you have to hunt down so you have to use it when you find it.

Can you believe it but I’ve never used dried mushrooms before but these wild porcini mushrooms were most definitely the star of the show.  Not only was rehydrating them super-simple but they tasted amazing plus you get t use the rehydration liquor for both the pie filling sauce and the gravy.  Genius. 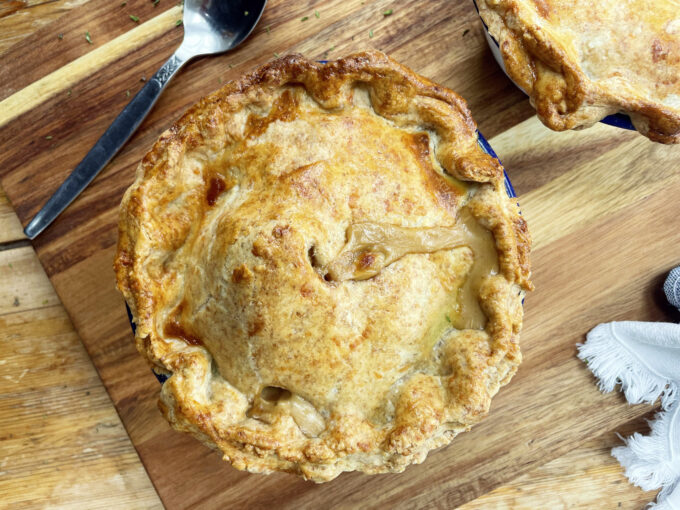 I have a lot of rye flour that needs eating so including it in this crust was a no-brainer plus it adds a certain nuttiness that compliments this dish so well.  I’d highly recommend having a bag in the back of your flour cupboard for such instances.

Please note, if you don’t have wild garlic then sub spinach or rocket (just a handful) but also add 1 clove of garlic (crushed) to the sautéing veg. 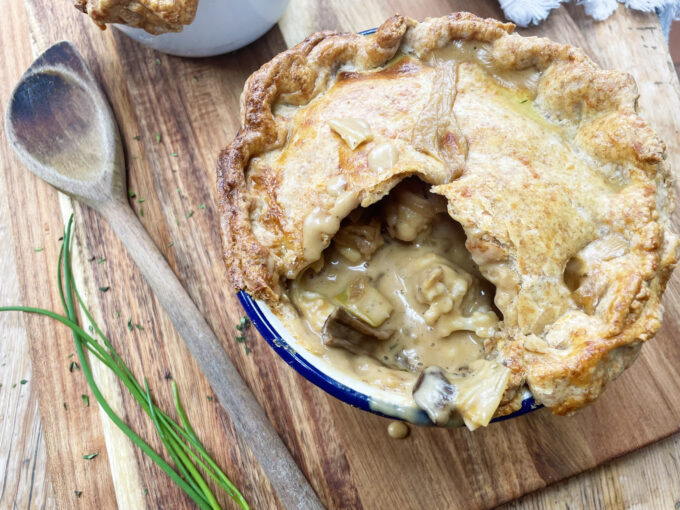 for the cheesy rye crust

for the pie filling

for the cheesy sauce

Place the flours and butter into a large bowl and rub it together with your fingertips until it becomes the texture of bread-crumbs. Next rub in the finely crated cheese until it’s combined well.  With your hand shaped like a claw, add a little dash of cold water and start to circulate your clawed hand in the flour to bring it together into a dough.

You may need to add a little more water to help bring it all together but do this a dash at a time.  You should be able to clean the bowl with the ball of dough.

Rehydrate the mushroom according to the package they come in.  Mine said to soak them in 500ml boiling water for 30 mins.  Once this time is up, squeeze them out and set them aside.  Leave the liquid to settle then strain through a sieve and set aside. (You’ll use it later for the sauce.)

Using a large shallow pan, place it on a medium heat and add some butter and olive oil.  Then throw in the onions and leeks and let them sauté for a few minutes until they begin to soften but not colour.  Then stir in the mushrooms and again let them sauté for about 4 mins.  If using, add the cauliflower and then pop the lid on the pot for about 5 mins to allow the cauliflower to sweat and soften.

Stir in the wild garlic and place the lid back on for a minute more as it wilts.  Season the whole dish well and set it aside whilst you make the cheese sauce.

Place the milk, butter and flour into a saucepan on a gentle heat and whisk gently until it thickens.  You must whisk and whisk or you’ll get lumps.  It will take roughly 8 mins to thicken.  If it looks like it’s turning lumpy simply remove it from the heat and stir.

Stir in the grated cheese and then roughly 100ml of the mushroom liquid.  Stir well and then when it’s gloriously glossy tip the cooked vegetables into it and stir it all together.

Time to bring it all together

Pre-heat the oven to 170C (fan) I’m using 2 x deep falconware enamel pudding basins to make this pie but it would easily work in one large pie dish or 4 smaller ones. Butter the basins or pie dish.

Take the pastry from the fridge and divide into two.  One larger than the other.  Then divide these two into two more so you now have 4 pieces.  2 large and 2 smaller.  The 2 smaller are the pie lids and they can go back into the fridge for now.

Spoon the filling between the two pies until you’ve used it all up. Brush some beaten egg around the rim of the pastry.

Roll out the lids so they’re larger than the tops of the pudding basins and lay them on top.  Crimp the edges with your thumb and fingers or a fork and brush the top with more beaten egg. Cut a slash into the top of the pies.

Bake for 35-40 mins or until the tops are golden and crispy. 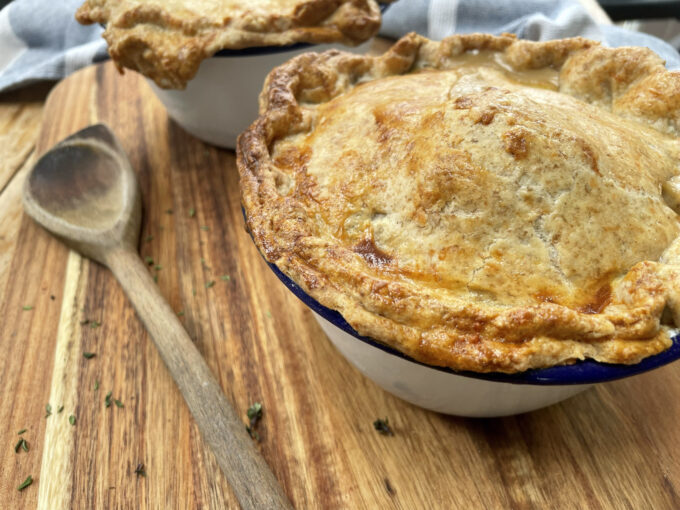 For more pie recipes check these out on Dom in the Kitchen.