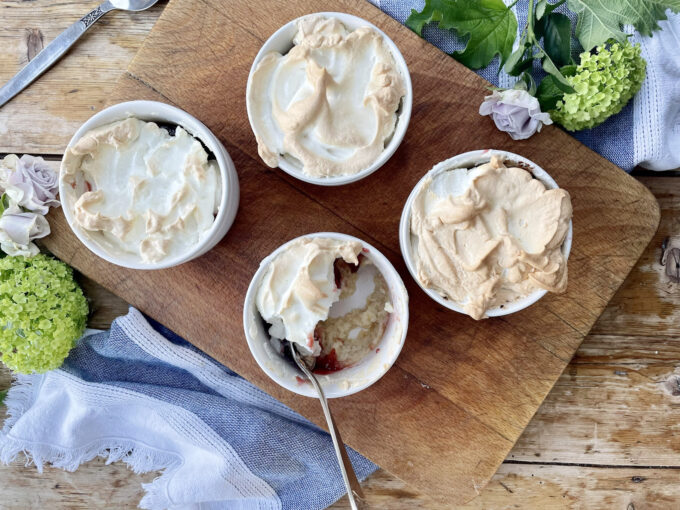 This Queen of Puddings is one of two recipes I’m making for my good friend Richie who runs a wonderful pub called The Red Lion Inn. It’s in the lovelly village of Raithby not far from us here in Belleau.  He has honoured me by asking if I’d like to have one of my puddings featured on his Spring / Summer menu!

I’m unbelievably touched by this offer and also a little nervous.  One of my puds on a restaurant menu!  Imagine that.  He’s asked me for something classic and British and suggested either a Queen of Puddings or an Apple Charlotte, both of which I’ve never made, so I’m testing a few recipes. 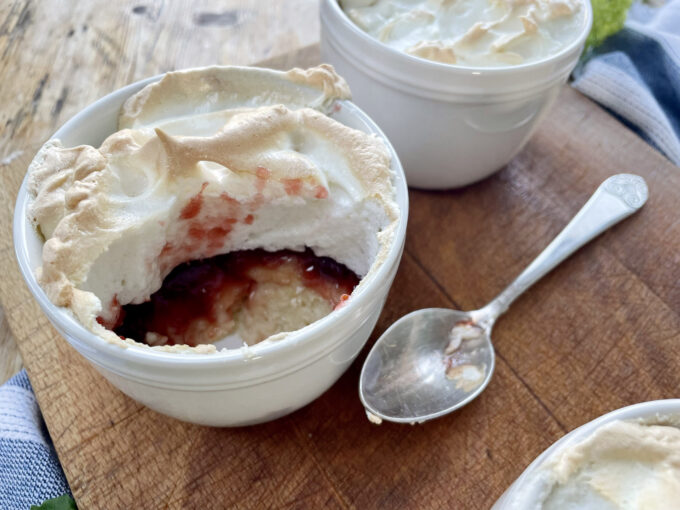 This recipe is inspired by one by Jamie Oliver.  I did quite a bit of research into the Queen of Puddings and it’s amazing how many versions there and how complicated some people make it.  The reason I liked the Jamie Oliver one is because it felt classic and simple which I expect the original was.  You could of course make it all fancy by piping on the meringue or making your own jam or even a nice tart fruit compote would be nice but I like the use of jam here.  It feels very 60’s and very real.

Preheat the oven to 180ºC. I’m using 4 ramekin pots but this would work just as well in a larger oven-proof dish.

Place the butter, milk, cream and 1 tablespoon of sugar in a saucepan over a low heat and bring almost to the boil, stirring occasionally.

Place the breadcrumbs in a bowl and pour over the hot milk mixture. Allow to soak for 15 minutes.

Separate the egg yolks and whites, and lightly beat the yolks.

Stir the lemon zest and juice into the soaked bread mixture, then add the beaten egg yolks.

Pour into the pie dish and bake in the oven for 25 to 30 minutes, or until firmly set.

Remove and allow to cool, leaving the oven on.

Lightly warm the jam in a pan, then spread it evenly over the pudding.

For the meringue topping, whisk the egg whites until soft peaks form. Then gradually add the remaining sugar and whisk until smooth and glossy. 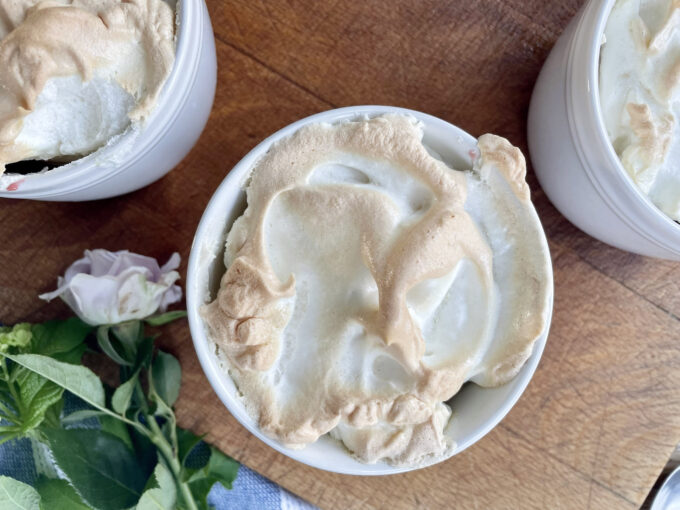 For more classic pudding recipes, check these out on Dom in the Kitchen.

Tomato, Feta and Strawberry Salad with my Slightly

I love my garden for many reasons… #worldnakedg