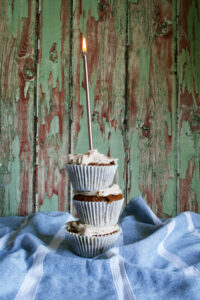 It’s Friday 24th September and it’s my birthday!  So I’m celebrating by making these wonderful birthday carrot-cake cupcakes.  Regular readers will know that I share my birthday with my life-long partner The Viking.  Yes, unbelievably it’s true.  The carrot cake is one of his favourite cakes and so a number of years ago I started making it for our birthday.  I usually make it as a two-layer carrot cake like I did a couple of years ago but this year I thought I’d go for something different.

I love a cupcake.  They’re such a fun and easy to eat bite of nostalgia.  We always had them at birthday parties when we were kids, although back then they were called ‘Fairy Cakes’ and were usually a basic sponge cake mix with a thin layer of simple icing on top.  Maybe a jelly tot placed on top as ‘decoration.’  Still they were wonderful and although the cupcake has evolved they’re still very evocative to me. 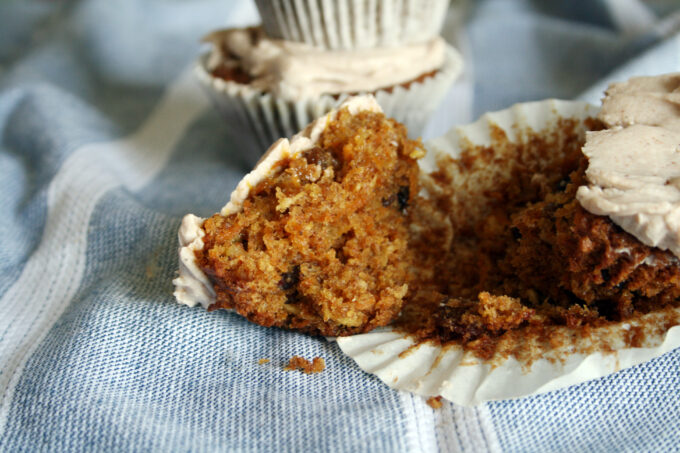 The recipe is an adaptation of one taken from the brilliant Delia’s Vegetarian Collection by Delia Smith.  It’s what she called her ‘Luxury Carrot Cake’. I change it every time I make it using whatever ‘bonus’ ingredients I have lying around and this year is no exception.

for the cake
For the cinnamon icing
For the syrup glaze

Once the oven is up to speed spread the pecans out on a tray and pop them into the oven for 8 minutes (absolutely no longer, you really don’t want burnt nuts (!!)

Next, onto the cupcakes – place the sugar, eggs and oil in a bowl and whisk them together for 2–3 minutes until the sugar has dissolved. (I’m using my smeg stand mixer with the whisk attachment but an electric hand whisk and a large bowl would work just as well.)

Sift the flour, spice and bicarbonate of soda into the bowl – the little bits of bran left in the sieve can be tipped in at the end and fold all this in gently. (I change the attachment to the cake batter paddle and put it to the lowest setting.  Once that is evenly combined,  add the rest of the cake ingredients and gently fold in.

Divide the mixture evenly between your cupcake cases.  I usually use 2 tablespoons per case, or until they are 2/3rds full. Bake the cupcakes near the centre of the oven for 15-20 minutes until they are springy and firm in the centre.

Whilst the cupcakes are in the oven make the the syrup glaze by simply whisking together the sugar and fruit juices. As soon as the cupcakes come out of the oven, first stab them all over with a skewer and then spoon the syrup evenly over the hot cakes. After that they need to cool completely in order to soak up all of the syrup.

Make the icing by whisking the mascarpone, cream cheese cinnamon, juice and sugar in a bowl till smooth and fluffy. Then cover the bowl and chill until needed.

As soon as the cupcakes are completely cold slather each one with the icing and a sprinkle of cinnamon. 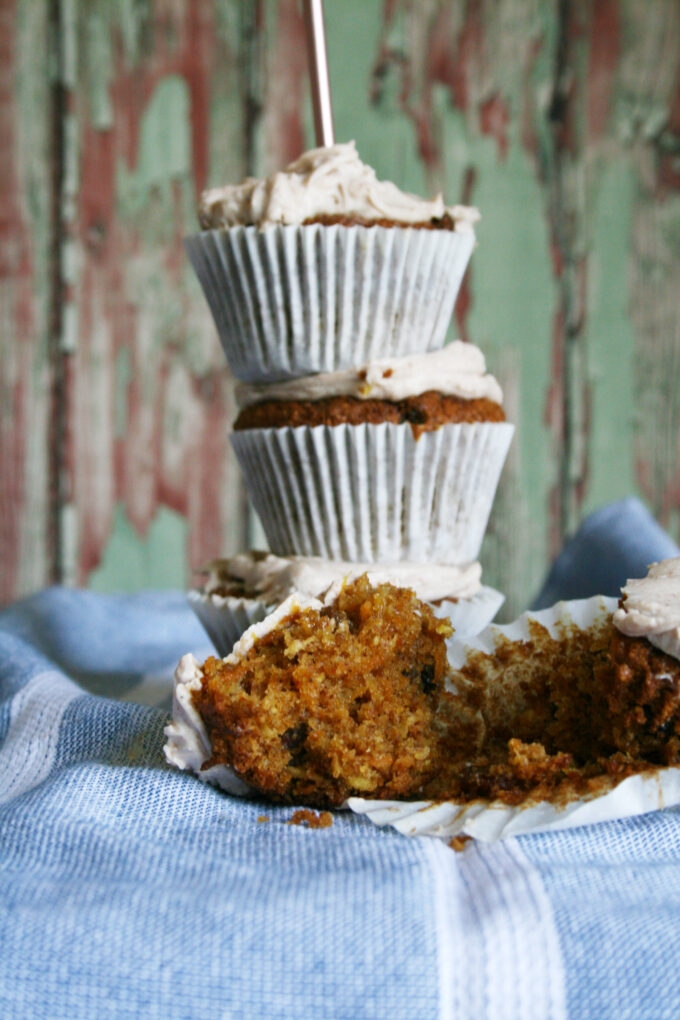 Check out Dom In The Kitchen for more cupcake recipes