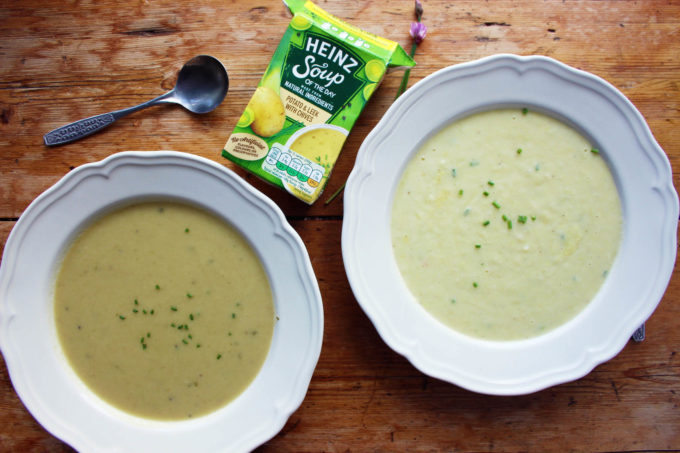 … so as many regular readers will know, I pretty much grew up on soup.  I mean that’s not entirely true but I think a combination of being from a Jewish household where the infamous ‘Jewish Penicillin’ of chicken soup with knedlach was standard Friday night fayre and growing up in the 70’s and 80’s when dinner parties were de-riguer in any middle class household and all dinner parties, without fail, started with soup.  This meant that mum, my cooking inspiration, made what seemed like a million combinations of soups.  Throughout our childhood and on into my college years, if there was one thing that was made that I feel could be a constant food companion, it was soup.  I even think if you asked my friends the one food thing they know me for, it wouldn’t be the chicken thighs that many of you think, it would be soup.

I simply love the stuff and I don’t think you can blame me.  What more can be better than a bowl full of warming, fresh, tasty vegetables all blended together in scrumptiousness?  Now, i’ve always made my own soups as I pretty much have it down to fine and fast art and soups are great because they can be frozen so I rarely have the need to buy soup (although saying that there is also nothing in the world that can replace the flavour and comfort of a bowl of Heinz Tomato Soup!) But I also know that if you’re time poor or have a manic lifestyle, sometimes making something that should be very simple can become a bit of a task, so I was very intrigued when the good people at Heinz asked be to take their Souper Fresh Taste Test for their new range of Heinz Soup of the Day, a delicious and fresh-tasting range of soups that ‘taste as good as the day they were made.’ Every recipe in the range has been made by the Heinz expert chefs from natural ingredients, carefully combined and gently simmered to let their flavours shine through. There’s also no added sugar across the whole range. The soups are then sealed into cartons, meaning there’s no need for any artificial preservatives, colours or flavours. They don’t even need to be kept in the fridge. It’s quick and convenient plus there’s 1 of your 5 a day in 1/2 a carton when eaten as part of a balanced diet. 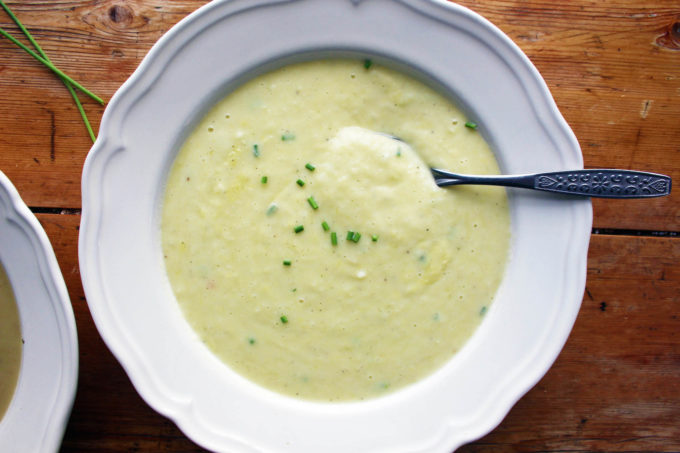 potato and leek soup with chives

so the concept behind the taste test is for me to make the soup with my own fresh ingredients and then compare my home-made soup to the Heinz Soup of the Day. I think it’s a very brave and also very cool way to be proud of a product and I couldn’t wait to take part… firstly I had to make the soup to a recipe provided to me by Heinz…

add the butter to a large soup pan and heat on medium to high heat, then add the diced onion and fry gently until onions are soft and light brown in colour. Add the leeks and potato and fry for 1 minute then add the stock and skimmed milk to the pan, stir, cover and simmer gently for 20 minutes

take the soup off the heat and blend it to a smooth consistency then add the single cream, pinch of chives and pepper, and cornflour if using (*may not be required to thicken if using floury potatoes), and stir through

take the pan back to a gentle heat and let it simmer for 2 minutes then pour into a bowl, add a small pinch of salt to taste 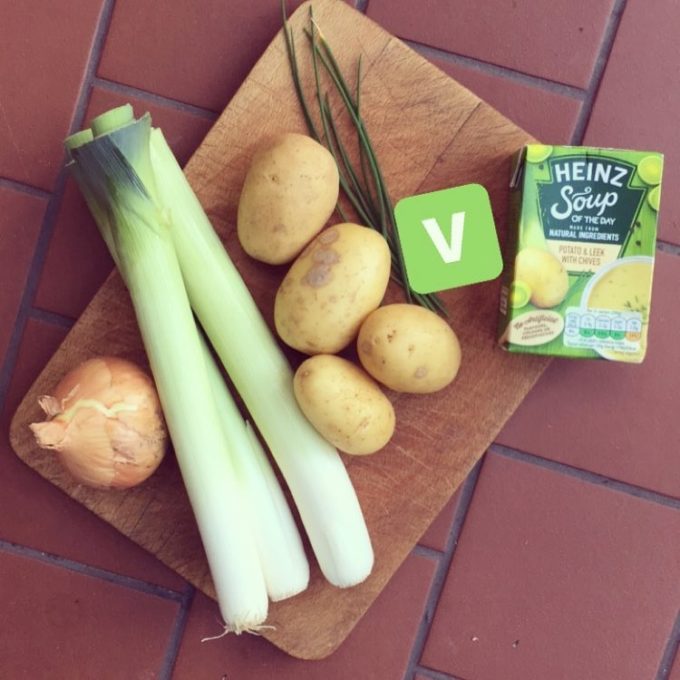 …Pretty simple right? And very similar to my usual leek and potato recipe which makes me feel confident that the Heinz Soup of the Day version should be good.  To make the test fair, I asked The Viking to get involved.  I wanted him to try the two soups completely unaware of which was mine and which was the Heinz product and so I served them in identical bowls laying both on the table at the same time.  I tried them both myself too of course.  The good folk at Heinz asked us to judge the soup with a specific set of criteria which i’ve laid out clearly below: 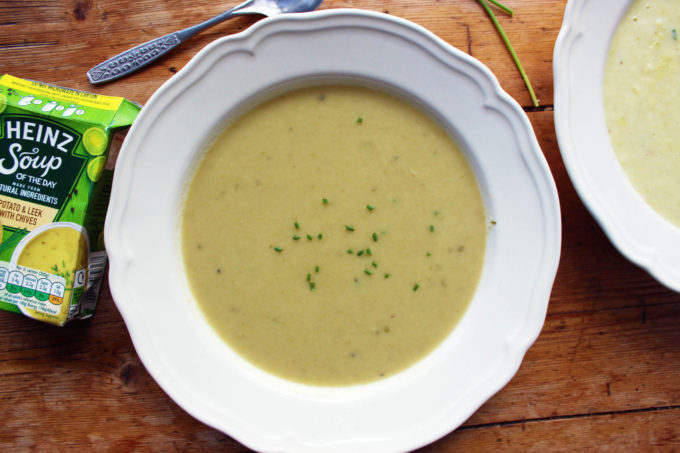 Time  – my soup took roughly 30 mins to prep and cook, which I don’t think is very long from raw ingredients to delicious soup.  The Heinz Soup of the Day took 4 minutes to heat through.

No Faff – my soup needed 100% more prep than the Heinz soup but wether this is faff or not is relative right?  I mean I love being in the kitchen but if you’re hungry and you want to tear open a lovely fresh-tasting soup then this is the soup for you.

Taste – my soup was a clear winner with everyone who tried (I asked my neighbours Tracey and Nigel to try it too just so we weren’t biased.)  Everyone said that both soups were very nice they simply all agreed that my soup tasted fresher, which I guess it was, regardless of the packaging, the Heinz Soup of the Day simply can’t compete.  It was also agreed that whilst the packaged soup was nice it still had that ‘pre-made’ taste, although everyone also agreed that if there was an option of packaged soups only, this one would win hands down.

Cost – the ingredients for my soup cost roughly £2.80 whilst the Heinz Soup of the Day cost £1.40, although I got at least 4 bowls out of my ingredients compared to one bowl in the pack.

So there you have it.  2 nice soups and even though the freshly homemade soup was the winner it’s good to know that there’s an alternative, fresh tasting option out there.  Something I can stick in the cupboard and pull out when it’s cold out and I need a flavourful pick-up!… the other thing that’s really nice about this whole experience is that I now have a really lovely recipe for potato and leek soup that is thick and creamy and delicious! 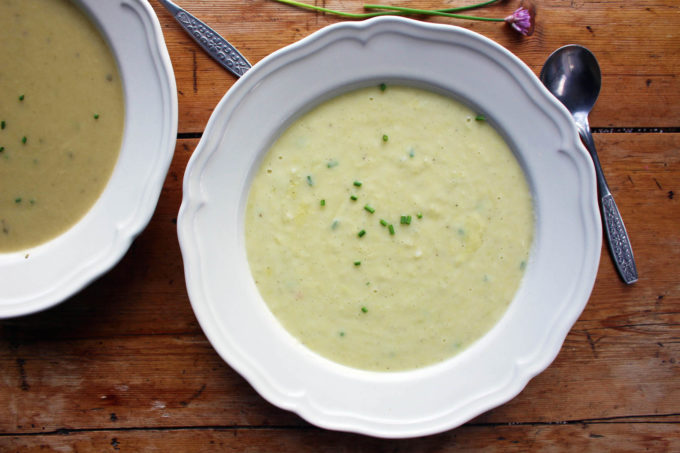 eat and of course enjoy… oh and I need to inform you that I have been paid to write this post but that the thoughts, writings, musings and results of the taste test belong to me (and The Viking) and were in no way influenced…