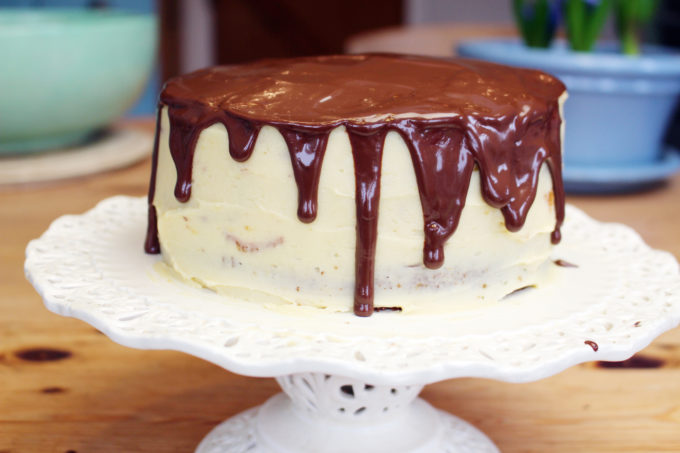 … back home which, even after all these years, is the one thing that settles us both.  It’s easy to forget how fortunate we are to have the luxury of our little cottage in the country but every time we’ve been away for more than a fortnight and we walk through the front door I feel instantly calmed.  It has such an effect on us that often our bodies seem to let go and we spend the weekend in a sort of zombified coma, suffering from bed to sofa to kitchen but this weekend there’s gardening to do as Spring begins to poke its head out of the lawn.  The garden is really The Vikings domain and so he tends to get on with that himself and of course I have baking to do but it’s lovely and mild out there this weekend and the garden is truly starting to blossom with little bulbs popping up to say hello and some busy birds beginning to look for nesting sites that I may have to join him once the cake cools and the icing is set… 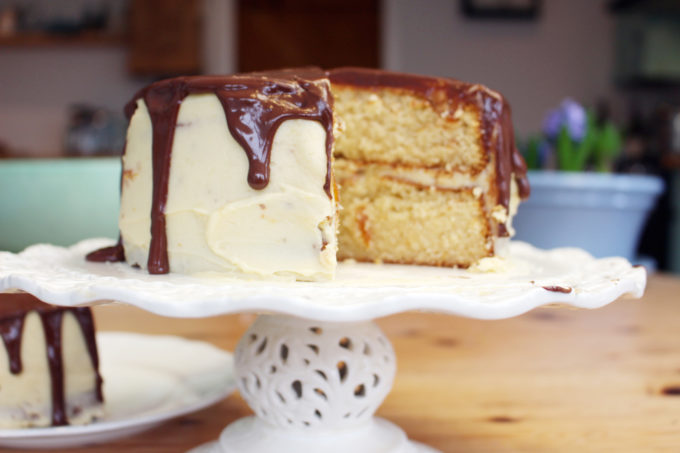 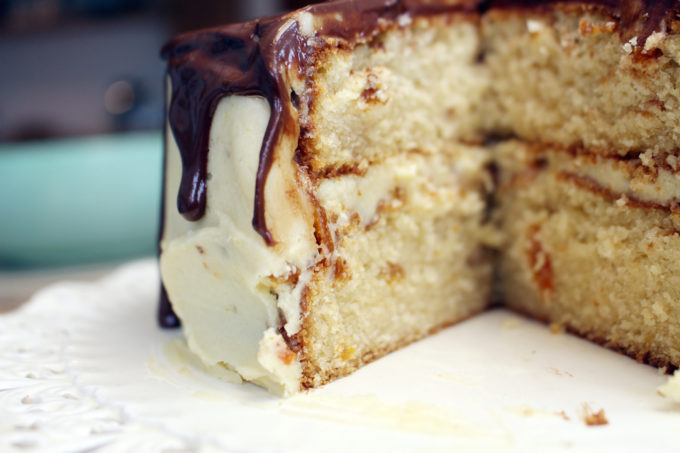 this cake not only reminds me of my mum but it also reminds me of her mum, my grandma Jennie… and for that reason I always think it makes for the best Mother’s Day cake.  It’s a very simple recipe that i’ve adapted to include some ground almonds which I always think makes a cake a little more special but it’s its simplicity that makes it so great… oh and nearly a whole jar full of marmalade also helps.  Whilst the marmalade is sweet it has a wonderful bitter edge that cuts through all the sugar… i’ve added marmalade to the icing too which makes it extra special.

Just a note about butter… i’m working with the good people at Arla Foods on their #LactoFreeChallenge where I go lactofree for two weeks.  They’ve sent me a large selection of their lovely lactofree produce and i’m going to be using it in my day to day life for the next two weeks.  I’ll write about it further on the blog at the end of the challenge but of course it does mean that everything I eat and cook with needs to be lactofree, including this cake.  I’ve used the lactofree spreadable for both the sponge and the icing with no issues at all so feel free to follow me in my challenge or use your favourite butter or spread…

another little note… the marmalade has a high sugar content which tends to burn very easily but don’t panic just keep an eye on the cake and place a little foil over the top half way through baking… you’ll probably find it impossible for it not to burn but i’ve never had an issue, it doesn’t have that horrid burnt taste and the amount of icing you’ll use should hide the dark colour…

for the marmalade sponge

for the marmalade buttercream

mix well the flour and ground almonds then set aside

beat the butter with the sugar until pale and light and fluffy, then add a few tablespoons of the flour mix and one of the eggs and beat in until blended well, then add a little more flour and another egg and beat in again, continue this way until all the flour and eggs are gone and you have a soft, thick fluffy batter

to assemble the cake, place the bottom layer on your cake stand and spread some of the icing on top then place the second cake on top.  Cover the cake in more icing and spread it out evenly all over… if you have the time, create a ‘crumb’ layer first which is a thinner layer that you spread on all over then place the cake in the fridge for it to set before spreading another cleaner layer over the top

i’ve made a chocolate ganache by heating some cream to just boiling point then allowing a block of good quality chocolate to melt in it, as it cools it thickens to a perfect dribbling consistency, which I have allowed it to do down the sides of the cake 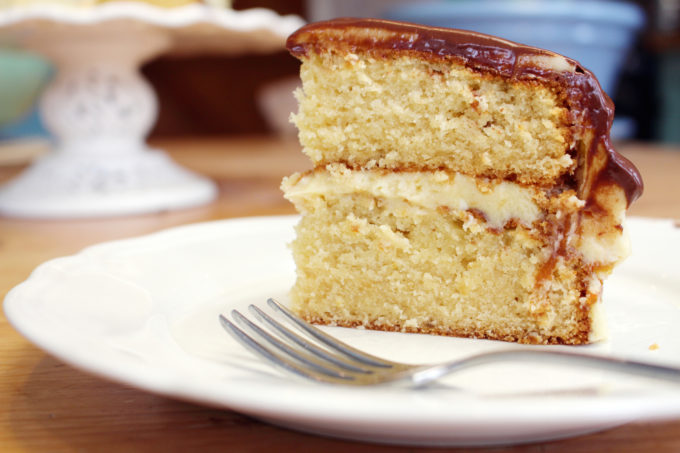