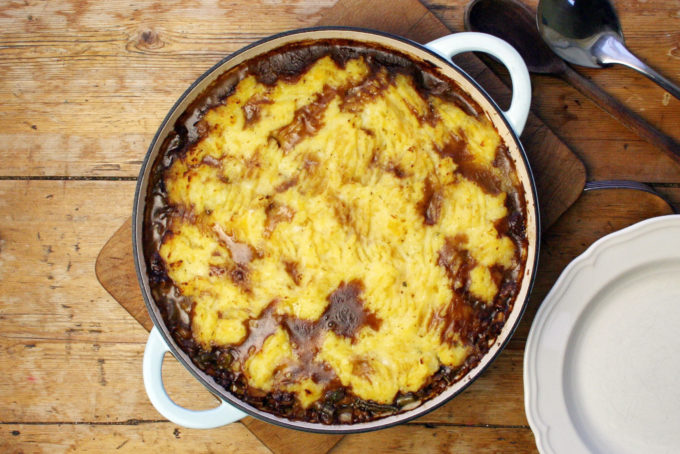 … the poor Viking has come down with an old-fashioned cold so it’s been a weekend of blankets by the fire and lots of healthy, fresh food and plenty of vitamins from fruit and nuts.  The Viking is pretty miserable.  He hates being stuck in the house and like a caged tiger he paces back and forth moaning about wasted days… for me it’s an utter joy.  I love having an excuse to do nothing.  We work so hard during the week and then the pressure of the blog means I work hard on the weekends too so an excuse to be laid up works well for me.  I also love it when I need to look after him.  It means I can boss him around but also spend time in the kitchen, making food, cups of tea and cake and forcing him to relax.  Silly, I know but I quite like it. 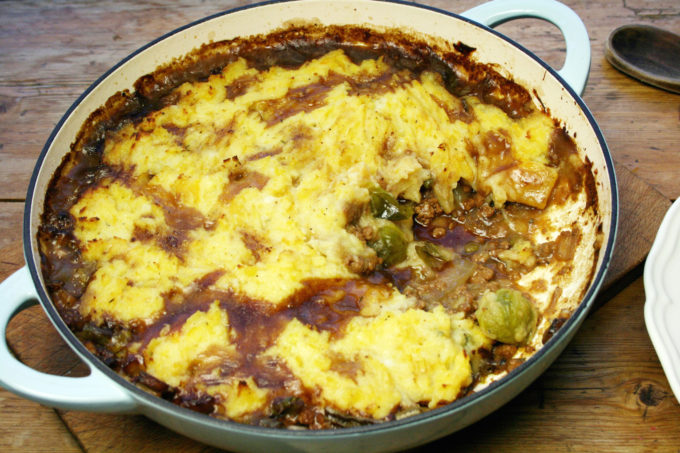 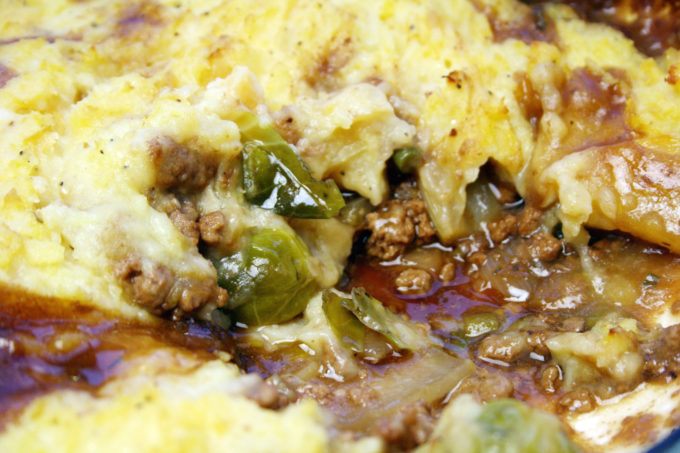 this is the perfect pie for a miserable wintery Sunday, it doesn’t take long to rustle together and yet it tastes like it’s been on the stove for a whole day… i’m also using a lot of left-over vegetables – stuff that’s either been in the fridge for a while or stuff that was left-over from a stir-fry made the other day… little cut-offs from the asparagus and the ends of the broccoli that I usually keep for stock but thought would work well here.  I like my shepherds pie with a little bite so i’ve include nice, chunky pieces of vegetables along with the Quorn mince.  A quick word on this vegetarian mince… I love Quorn products.  They’ve vastly improved the flavour over the years but they’ve also developed and improved the texture of all their products, so much so that I genuinely think this particular vegetarian mince substitute is by far the best on the market.  I know that many people don’t understand why you want want to replace the meat with a fake meat but i’m sorry, when I want a shepherds pie or a Bolognese, that’s exactly what I want.  The protein is essential for The Viking who needs it as part of his diet… and as a dyed-in-the-wool Northerner, he needs his pie so the Quorn really is the best of both worlds.

for the mash topping

start with the mash… I steam my swede and potatoes because I think they are fluffier this way but get them to the soft stage anyhow you like and then mash them together with plenty of seasoning, butter, olive oil and fresh herbs… i’ve also mashed in some strong cheddar for extra flavour – once you have a rough mash, set aside.

in a large pan over a medium heat, melt the butter and olive oil and throw in the celery, onion, fennel, garlic and herbs and let them sauté until soft with just a little colour. Throw in any vegetable trimmings you have along with the mushrooms and let them sauté and soften also, then throw in the Quorn mince and stir it around so that it absorbs all the wonderful juices and butter and let it cook off for about 5 minutes.  Stir in any other vegetables such as the sprouts and green beans at this stage.

turn the heat off and set aside to cool slightly, then place spoonfuls of the mash all over the top and carefully spread it out with a fork… it probably won’t completely cover the top but that’s fine and as the gravy bubbles through during the cooking process it will give it a beautiful rustic look

place in a pre-heated oven at 180C for 20 mins or until the the top becomes golden and crispy. 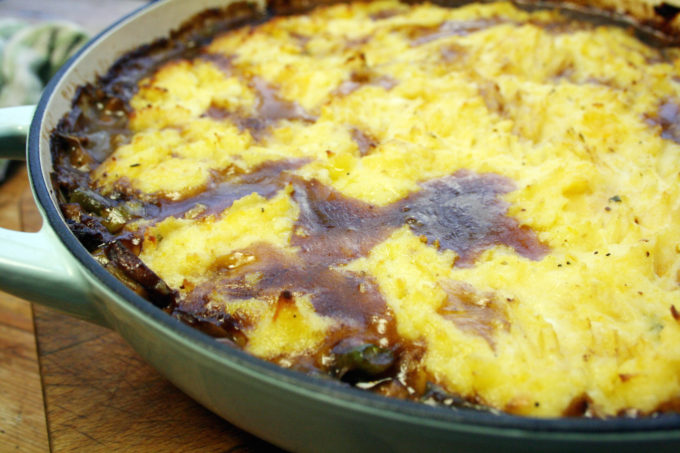