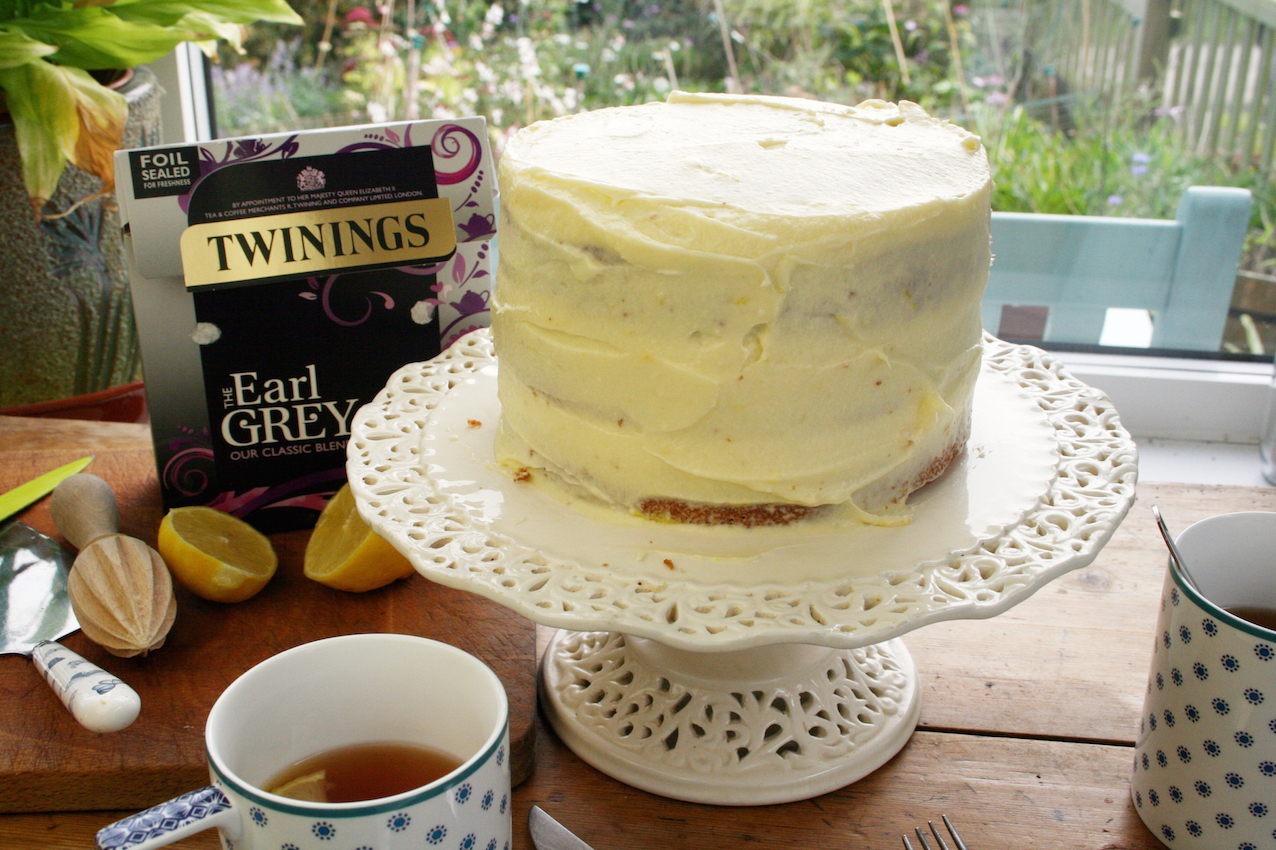 … well this darn cold has stuck with me and I can’t seem to shake it.  I’m now just ignoring it but I think this probably isn’t the best self-advice i’ve ever given.  Oh wouldn’t it be lovely to be able to take a few solid days in bed, although i’m not entirely convinced this is the way to go either.  I hate the idea of the world passing me by whilst I lay there… it gives me itchy legs.  I always remember as a young teenager, when I used to be sick, I could never stay in bed.  Mum used to work half-days and so i’d spend the morning basking in her love and glory and then once mum had gone to work I would be out of bed and into the kitchen…  I used to pretend I was on a TV cookery show, speaking into the ‘camera’ whilst I prepared dishes to cook.  Sometimes I didn’t even have an end dish in mind and I would just chop and mix and throw stuff into pans but other times I would meticulously plan ahead and prepare little bowls of pre-chopped ingredients like they do on TV so that I could have all the ‘TV chat’ down pat.  Come on now, don’t read this with that incredulous look on your face… you’ve all done some kind of ‘fake TV moment’ whether it’s winning the fake Oscar or pretending to present to camera… I can’t be the only one… Inevitably I would make an absolute mess of the kitchen and mum would always come home and have to clear up after me and more often than not I would have used every tool available to me in the kitchen, so there’d be a lot of mess.  I think she tolerated it because she could see that it made me happy and I was inspired by something… plus there would always be something wonderfully homemade for her to try… 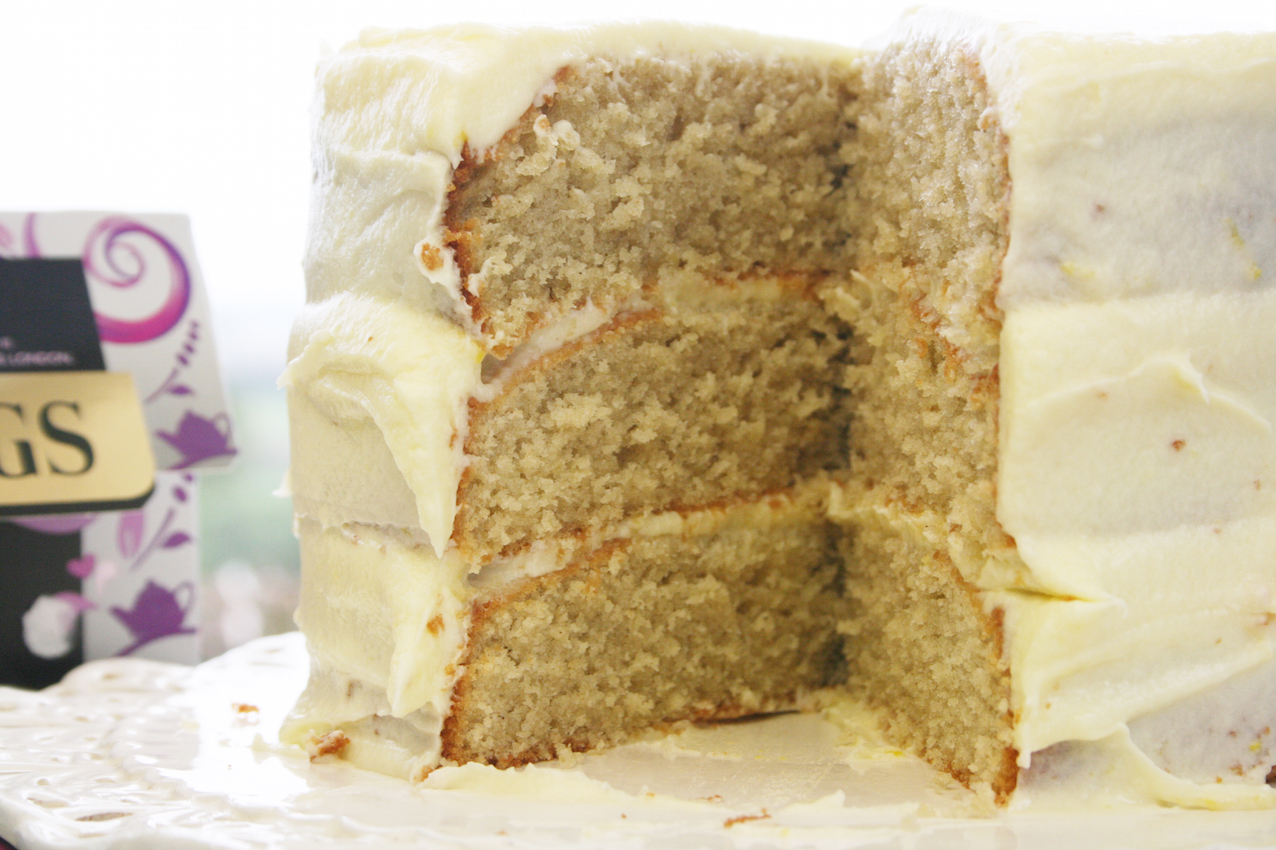 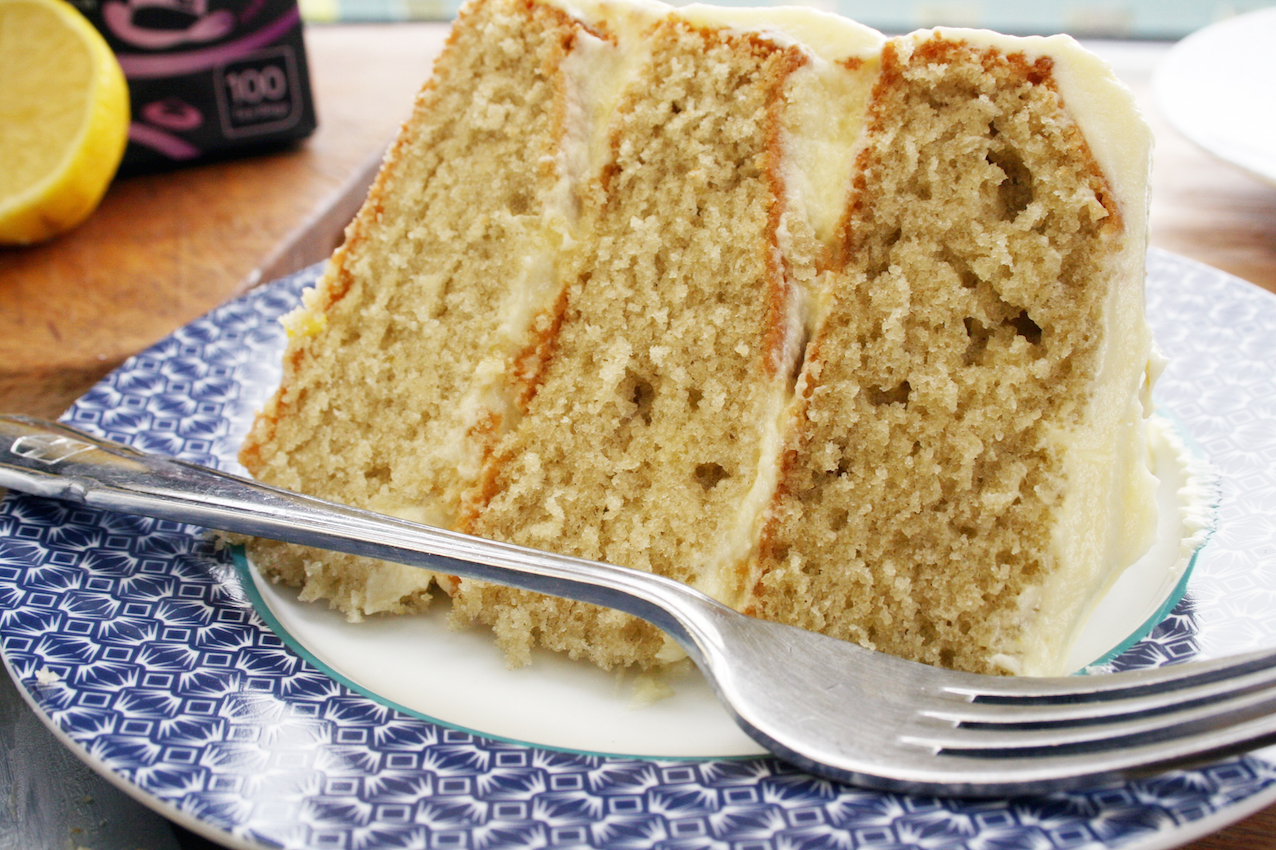 I love the history of this original Twinings quality blend tea… A British diplomat was given a case of tea by a Chinese Mandarin. He presented it to The Earl Grey, British Prime Minister from 1830 to 1834. He liked it so much that he asked Twinings (at the Strand) to replicate the blend for him. This bespoke blend was later made available to the public. Today, it carries the signature of Earl Grey VII. A delicate tea with a delicious twist of citrusy bergamot.  If you’ve never tasted it before I think it has quite a floral taste and aroma to it, I remember as a kid I used to hate it, thinking it tasted of washing up liquid but as my pale has matured i’ve grown to love it and its light, delicate and refreshing blend of citrusy bergamot is now my favourite black tea.   Even though Earl Grey has quite a distinctive taste there’s a subtlety to it which makes it perfect when baked into a cake. It has a lightness that is unmistakably floral which is further enhanced by the lemon buttercream but be careful with the amount of lemon you use as you don’t want the heady lemon oils in the zest to overpower the earl grey flavour, it’s a fine balance….

…i’ve used my favoured ‘weigh-the-eggs’ method here for the sponge and plumped for 5 large free-range eggs which weighed in at a staggering 270g and have therefore used an equal amount of butter, sugar and flour. No vanilla or other spices as I want the Earl Grey tea to be the lead flavour note. I’m using my favourite 18cm loose-bottomed cake tins as they create a smaller yet taller cake.

for the triple layer sponge

for the lemon buttercream icing

boil the kettle, place 4 Earl Grey teabags into a mug and cover with boiling water – set aside to cool

continue beating on a low speed and add 2 of the eggs followed by half the flour and continue to beat on low until combined then pour in 2 tablespoons of the tea liquid followed by the 3 last eggs and the rest of the flour… beat gently until combined, then add at least 2 more tablespoons of the tea and beat in… add more tea if you like, you want a decent, thick batter with a dropping consistency of thick double cream but any more liquid than this and it will be too wet.

divide the batter between the three cake tins and bake for 25-30 minutes or until the cakes are risen, golden and springy to touch – set aside to cool for 5 mins in their tins and then remove from the tins and let them cool completely.

to make the lemon buttercream, beat the butter until soft and light, then carefully add half the icing sugar and beat in, follow this with the remaining sugar, lemon zest and juice and beat till you have a thick but spreadable consistency.

to build the cake, keep it simple and ‘naked’… layer each cake with a generous slathering of icing followed by the next layer on top… one all the layers are covered simply smooth the rest of the icing all around and on top… and then leave it at that – nothing fancy, simplicity speaks for itself. 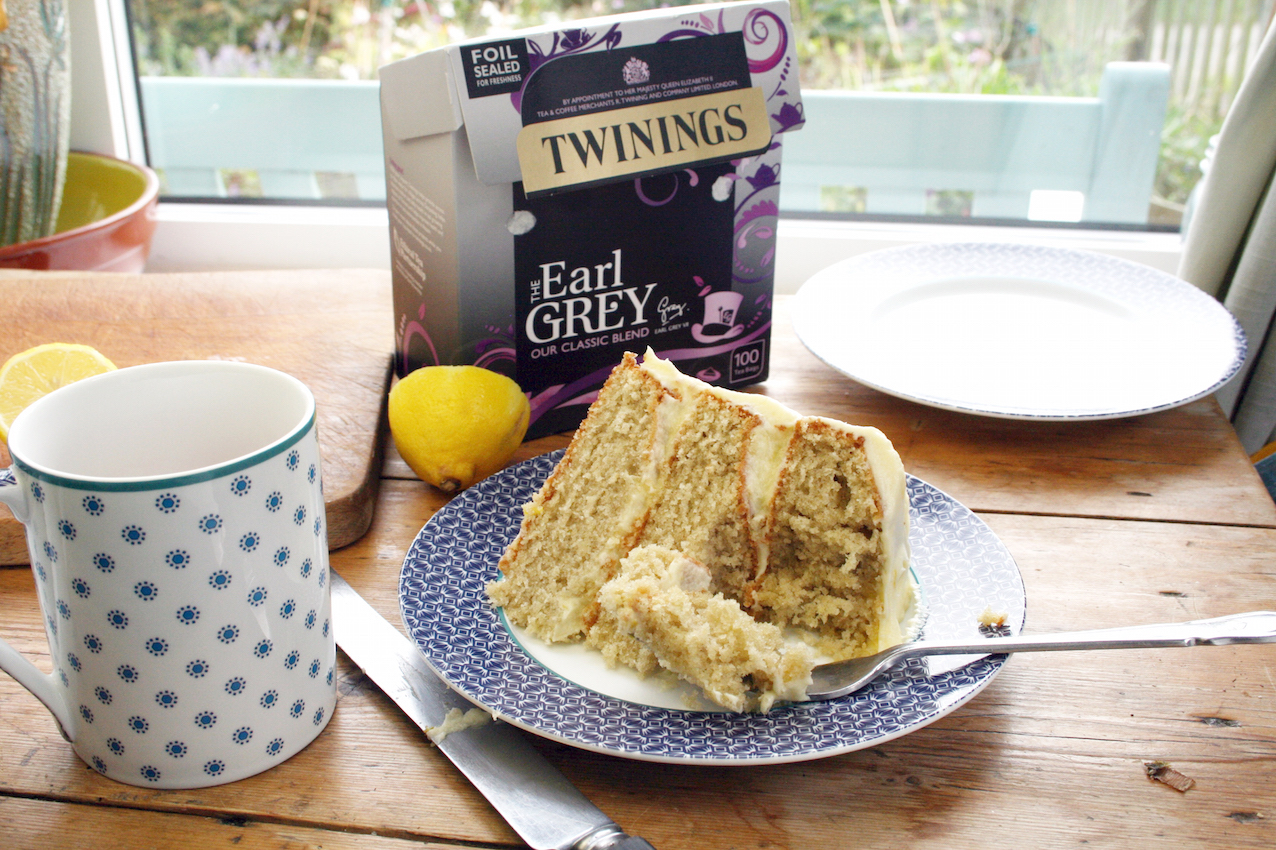 Twinings sent me their lovely tea so I could create this wonderful advertorial with them and so that we can all, eat and of course, enjoy!