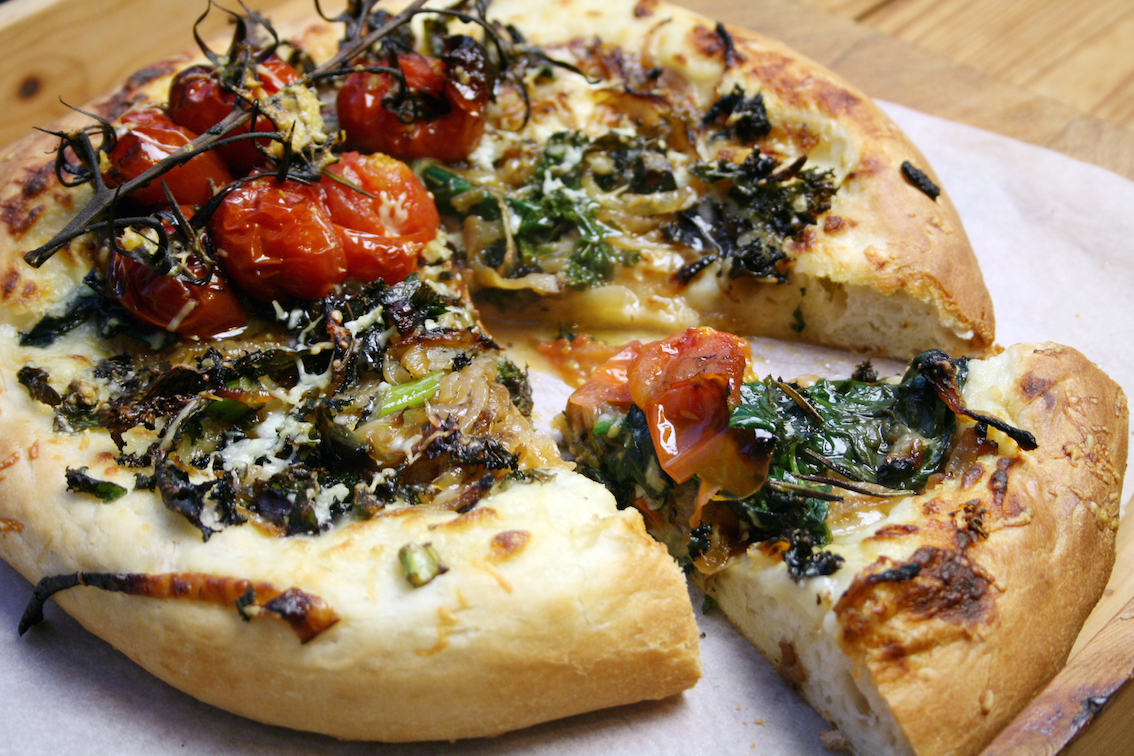 … i’ve had one of those rare weeks where I entirely lost my appetite.  It doesn’t happen very often but on occasion I get stuck into a loop of not eating and not being interested in eating except for absolutely rubbish food stuff like crisps here and chocolate digestives – not exactly the healthiest diet in the world.  It’s funny working in London because we’re surrounded by food.  If I look out of the office window I can see nothing but food outlets; the choice is quite phenomenally endless from nasty McDonalds through to very posh sushi and every Jamie Oliver restaurant in between and its sometimes this massive selection that cripples you into indecision. Do I want a salad or a sandwich… is it soup I fancy or noodles… don’t get me wrong, it’s amazing that we have all this outside our front door but when i’m alone in the vastness of the Lincolnshire countryside and I it comes to lunchtime I know that unless I make a huge effort to get into the car and drive to the nearest town, all I have to eat is what’s in the fridge… plus, very often these establishments try too hard with their food. Too many clever flavour combinations and influences from world cuisine when all I really want is cheese on toast… 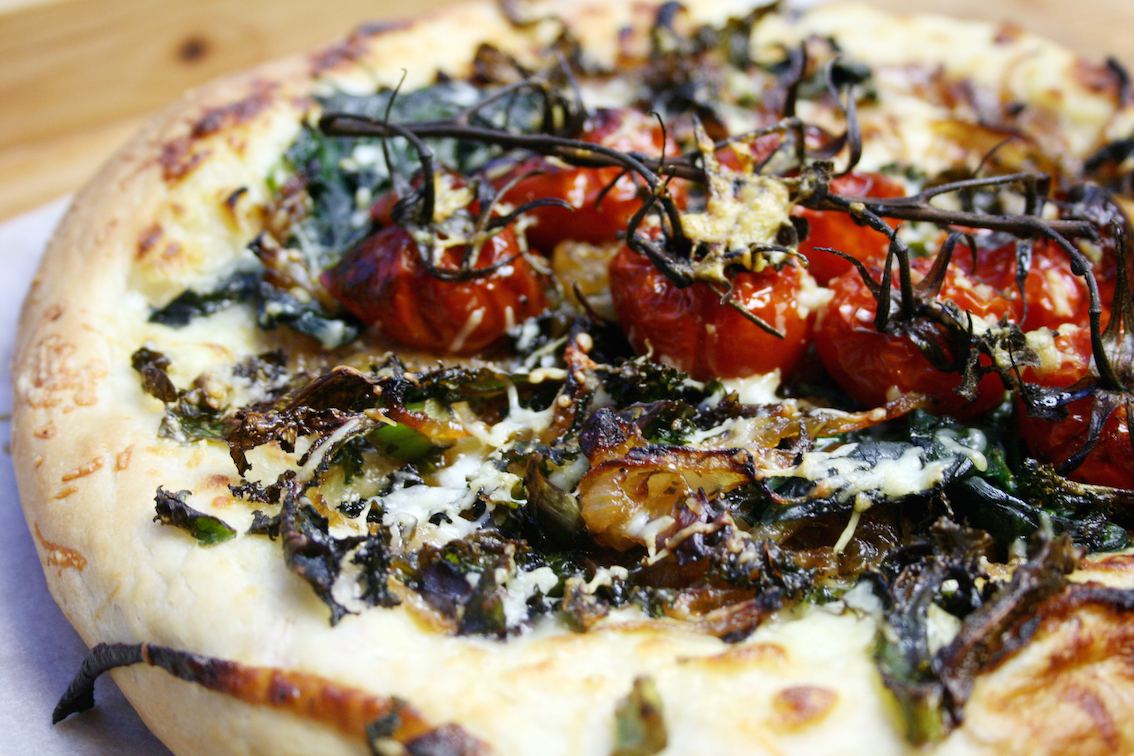 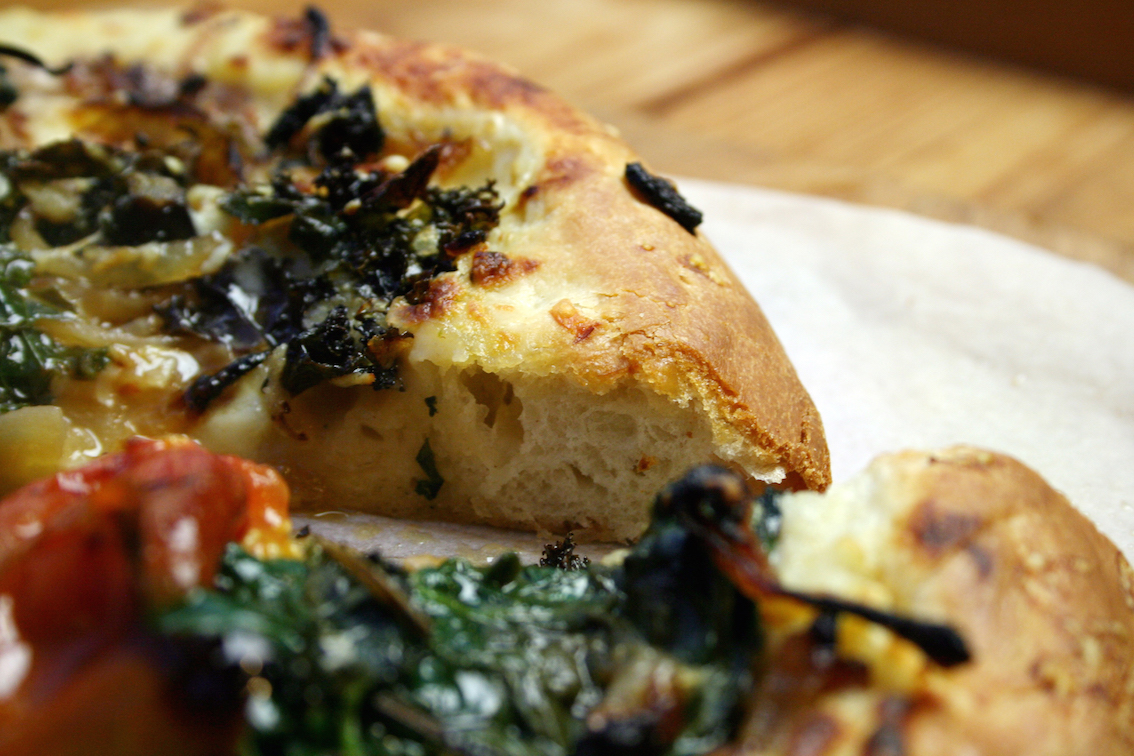 olive oil white sauce pizza with caramelised onions, kale, spinach and tomato
I was pottering around the kitchen last weekend, itching to use the dough hook on my new smeg stand mixer and whilst I could think of a hundred things to cook there was nothing that was really inspiring me until I thought about pizza.  It’s been an absolute age since I made pizza on the blog and both The Viking and I are huge pizza fans… well anything with warm bread and melty cheese to be honest and if truth be told we’re also both fans of the deep crust or the pizza pie, rather than the uber-trendy thin pizzas that are so much in fashion these days.  We like our pizza bases thick and the crusts even thicker… like a ciabatta or a focaccia.  So pizza it was and actually they came out beautifully.  The white sauce idea came about simply because I didn’t have enough tomatoes for a proper thick sauce and i’d seen it on a menu at a beautiful pizza restaurant in Italy when we were there for mums birthday a couple of years ago and it makes for a divine twist on the classic…

There’s a lot of different techniques going on here but you can actually make it all way ahead of time, even the pizza dough, and then once you’re ready to eat you can assemble the pizza’s which could be a fun thing to do together as a family or with friends…

for the oven-roasted vine tomatoes

turn on the oven to 160C and place the vine tomatoes into an oven-dish, drizzle generously with olive oil and balsamic vinegar, season well and gently roast for at least an hour

start with the dough by adding the oil, yeast, salt and sugar to the water and leaving for 5 mins whilst you sieve the flour into a large bowl. Add the water and oil mix and bring the flour together with your hands then knead for about 10 mins until the dough is soft and silky ( a dough hook on a stand mixer will bring this all together well in roughly 15 mins

oil a large bowl, place the dough into it, cover in cling film and let it rise till doubled in size – roughly 1 hour

meanwhile make the olive oil white sauce – this is essential a regular white cheese sauce but instead of butter, you’re using olive oil which you gently heat in a saucepan, then take the pan off the heat and add the flour and using a wooden spoon, stir in until you have a thick sauce, then return the pan to a very gentle heat whilst you stir continuously. The sauce should thicken and at this stage will come together to form a large ball – don’t panic, remove the pan from the heat and add a splash of milk and stir in well, add a little more milk and stir again, then return to the heat and continue stirring and adding milk in small doses. The sauce should start to thicken but if at any time it looks too lumpy, simply take it off the heat and stir vigorously and it should all come together. Once all the mil has gone let it bubble gently on the heat for a further 5 mins, then add the grated cheese and vegetable stock, stir in and set aside until you need it.

to caramelize the onions, add some butter and olive oil to a large pan, add the onions and a pinch of sugar and let them gently sweat away for up to at least 30 minutes, if not longer. You will need to stir these every few minutes and add some seasoning and a teaspoon of oregano after about 15 minutes but the longer you let them cook the darker golden they will go

once you have all your toppings ready the pizza dough should be perfectly risen – at this point you should turn your oven on and set it to 160C – if you have a pizza stone, place this in the oven now

place one ball in the middle of your work surface and, using your finger tips, begin to push the dough out towards its edges, going around the shape to form a circle, continue to do this until you have your desired shape… I’ve gone for a nice round but you could make it any shape you like

you’re now ready to place on the toppings… start with a generous helping of the white sauce which you should spread on with a spoon but don’t go all the way to the edge, then add the onions and a sprinkling if kale and spinach followed by a stalk of vine tomatoes. Season well then, sprinkle over some more oregano and a last handful of grated cheese and bake in the oven for roughly 15-20 minutes until the pizza is risen and golden and the vine tomatoes have burst 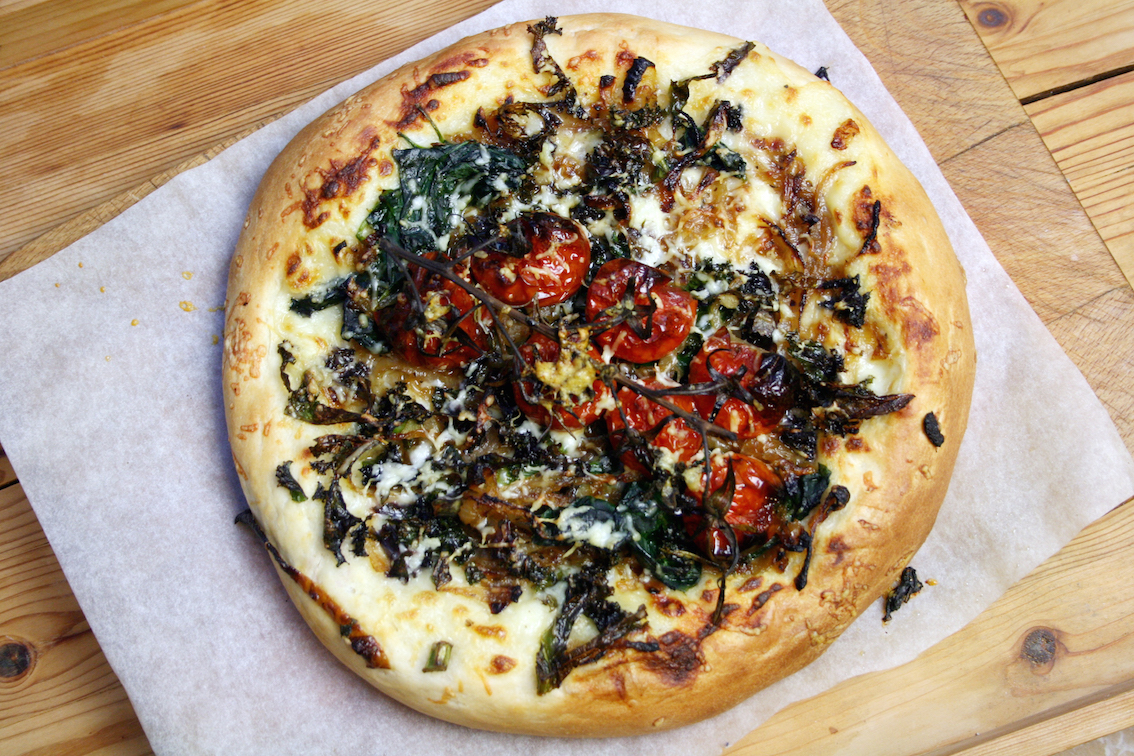