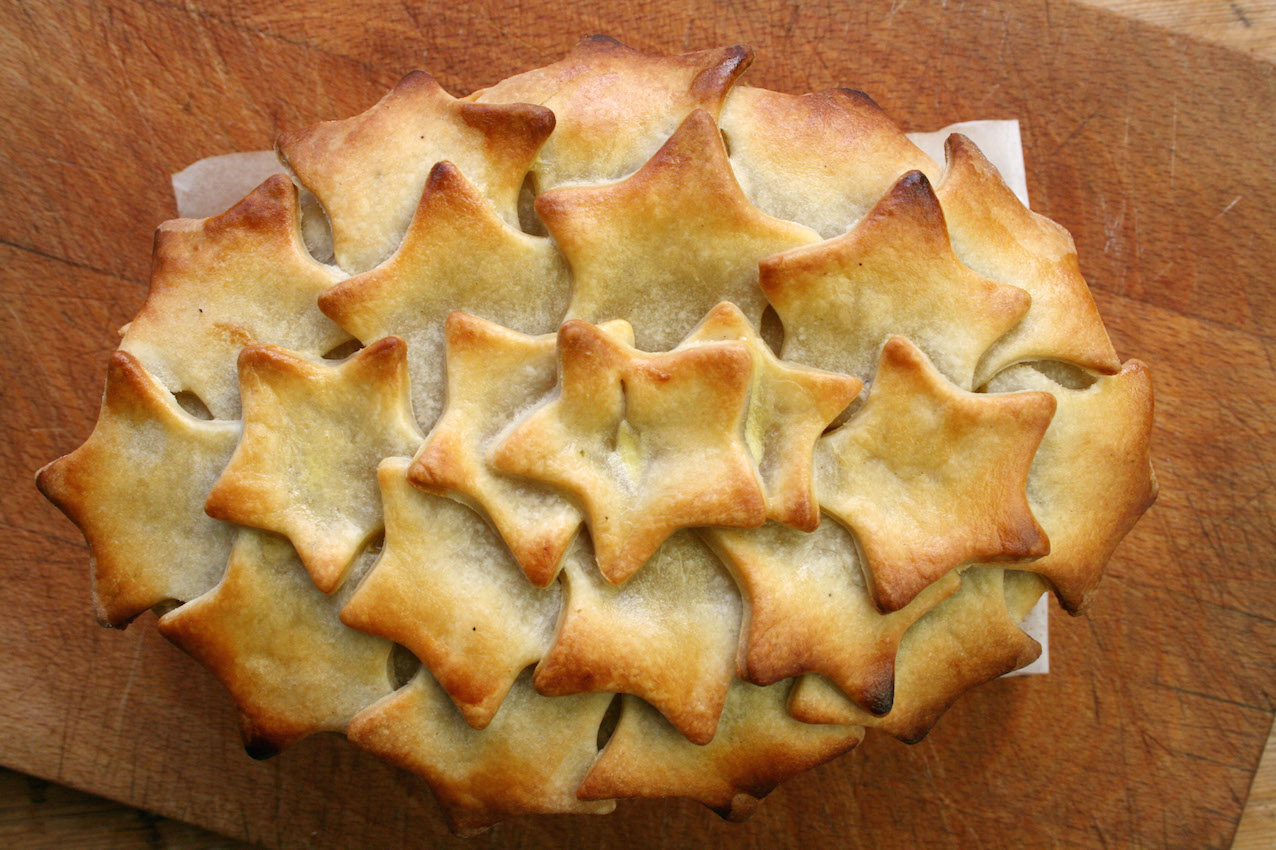 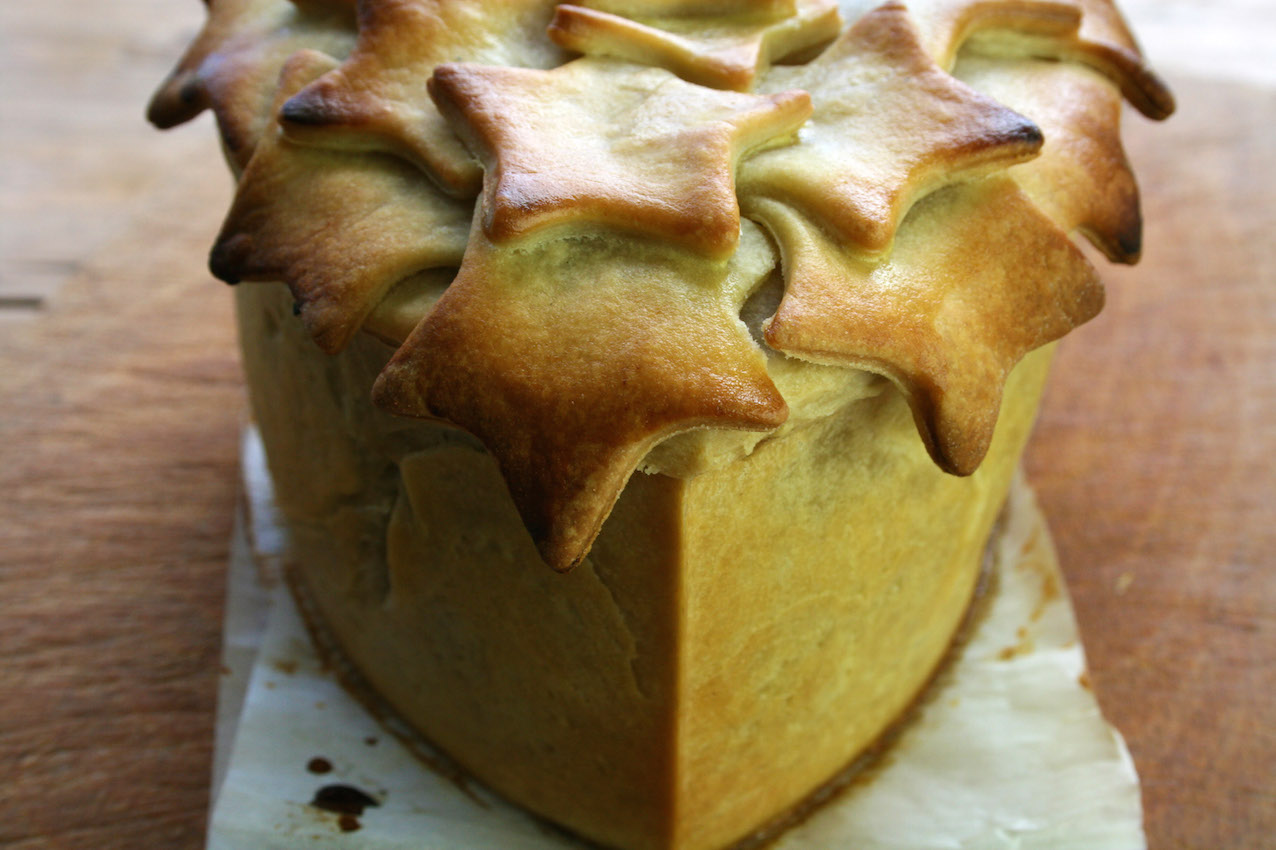 … The Viking and I very much enjoy watching the Great British Bake-Off.  It’s the one ‘reality game-show’ format we can actually bear watching and it’s not just the fact that I love cooking but it’s also the comedic brilliance of Mel and Sue that make it so watchable and ensures that it remains the bearable side of saccharine. I don’t think i’ve actually ever made anything directly from the show but on Monday this week I received an email from my good friends at lakeland offering me a Silverwood Oval Rasied Pie Tin and who am I to refuse… so it was nice that this week the #GBBO team made game pies.  I’ve actually never made a game pie, used a raised pie tin or made hot water crust pastry before so I was keen to give them all a go.  There’s something about this kind of baking that feels so wonderfully autumnal and it’s nice practice for later in the year when pies like this make excellent use of left-overs… i’m even thinking that this pie would make an amazing centrepiece for a vegetarian Christmas lunch… oh crap… I said the ‘C’ word… 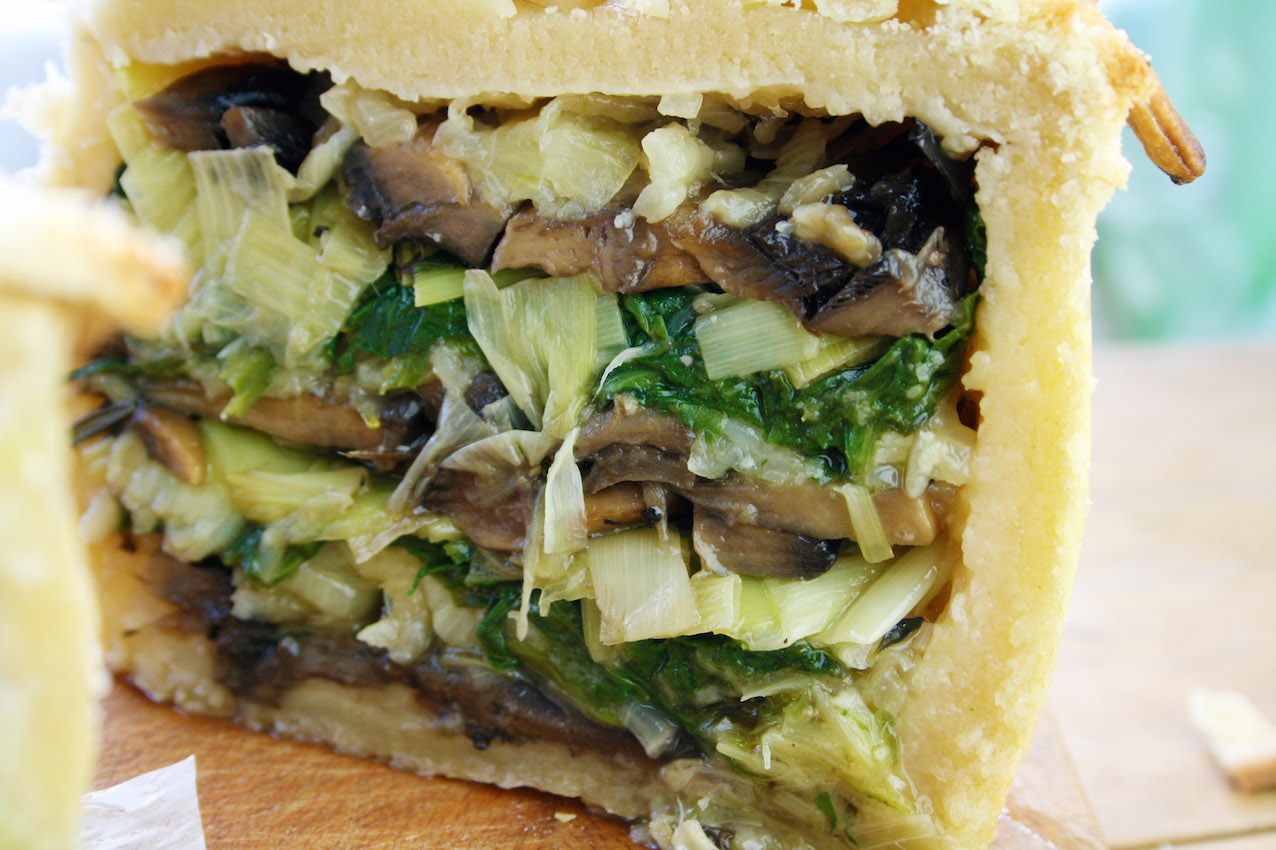 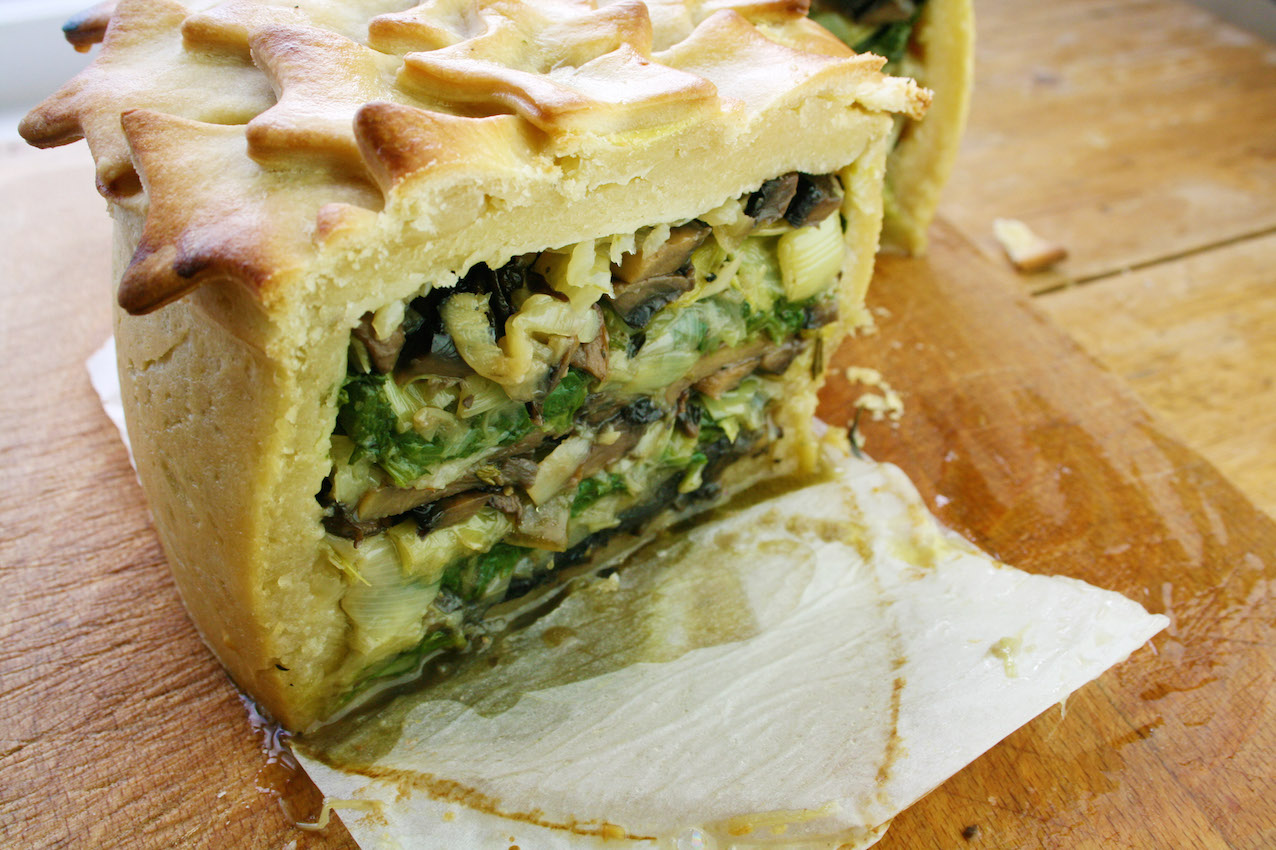 leek, mushroom and caramelised onion raised pie
I knew the pie had to be vegetarian because this was something I had to reluctantly share with The Viking as he adores pastry so much so I adapted the regular pastry recipe that came with the tin and simply replaced the lard with veggie margarine and it tastes superb.  The filling was a bit of an ad-hoc ‘whatever-i’ve-got-in-the-fridge’ kind of filling, knowing that the large fat portobello’s would taste superb and bind the pie together. I wanted to create a layered effect as I knew it would look so pretty but to be honest you could mix it all together and have a divine tasting pie just the same… a lovely red-wine gravy would be ideal with this as would a creamy sauce too.  I was worried about the whole process but it turned out to be quite easy and the pastry has done it’s job and remained crisp and stands up beautifully on its own…

oh… and before you tell me my pastry is too thick… this is exactly the way we like our pastry… a little crisp on the outside and soft on the inside… so go judge yourself.

to make the filling, first start by caramelising the onions…  in a large pan with a lid, gently heat a large nob of butter and a little olive oil, throw in the onions and stir around until they’re all coated, sprinkle on a pinch of sugar, place the lid on and let them gently bubble away for about 30 mins, stirring occasionally.

after 30 mins, take the lid off, turn up the heat to medium and let the onions really caramelise until they’re a lovely golden colour, then set aside but keep the pan you’ve cooked the onions in to cook the leeks, which you should do in a similar way to the onions, with plenty of butter until nice and soft, roughly 10 minutes with the lid on and 10 minutes on a gentle heat without the lid, then set aside

meanwhile, place the sliced mushrooms in an oven proof dish or baking tray, sprinkle generously with olive oil and plenty of rosemary and black pepper and gently roast for about 20 minutes until they are soft and beginning to turn golden.  They will need stirring every 10 minutes, then set aside.

place the vegetarian shortening, oil and boiling water in a pan and heat until the shortening has melted, then pour this into the flour bowl and bring it all together, first with a rubber spatula and then with your hands

tip it onto a lightly floured surface and knead gently for a couple of minutes then take three-quarters of the pastry, roll it out and use it to line the base and sides of the pie.  I did this by rolling out a large sheet, feeding it into the base of the pie and then carefully pushing the pastry up the sides of the tin.  The pastry is quite robust so this is not to tricky.  It’s best to leave the edges over-hanging whilst you fill the pie. 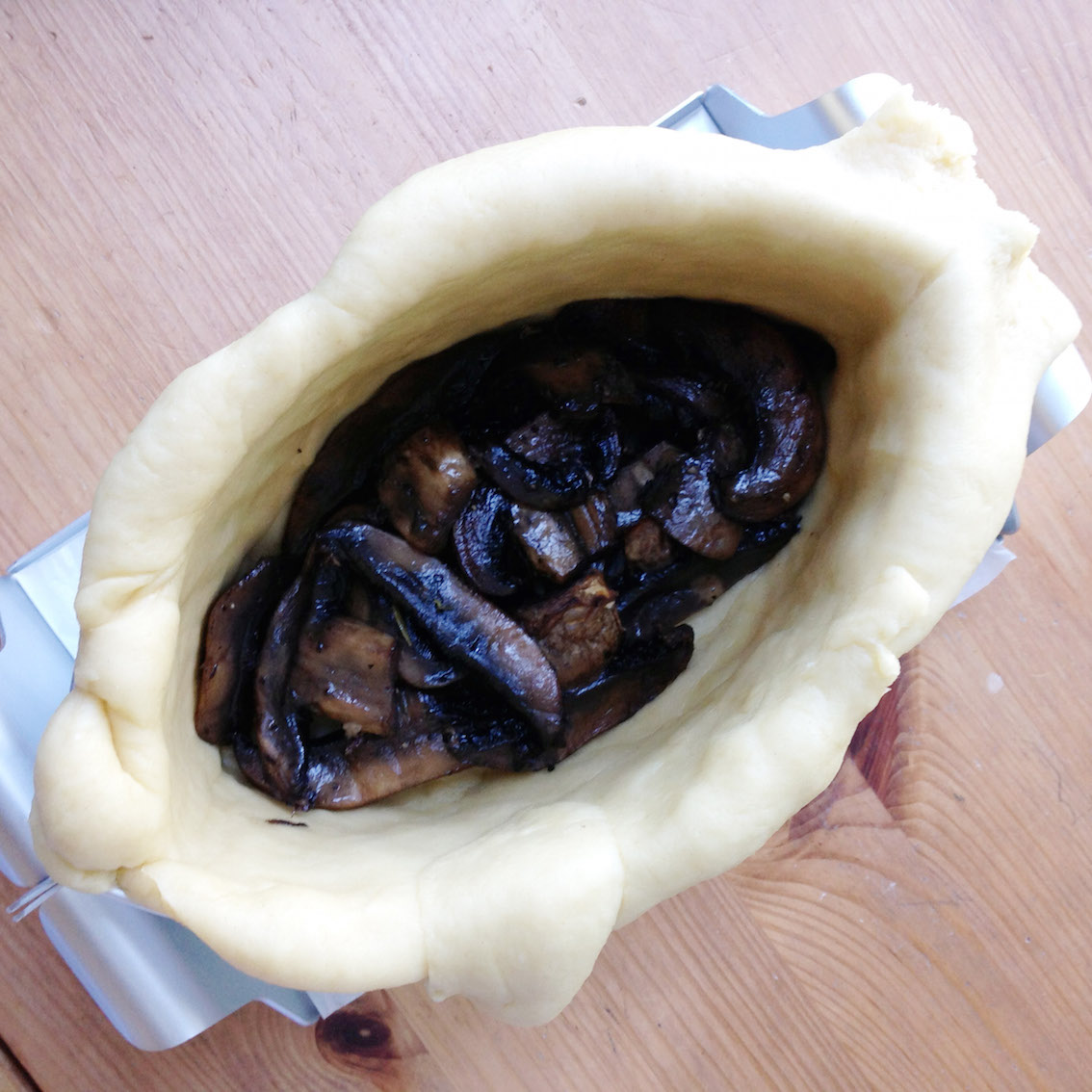 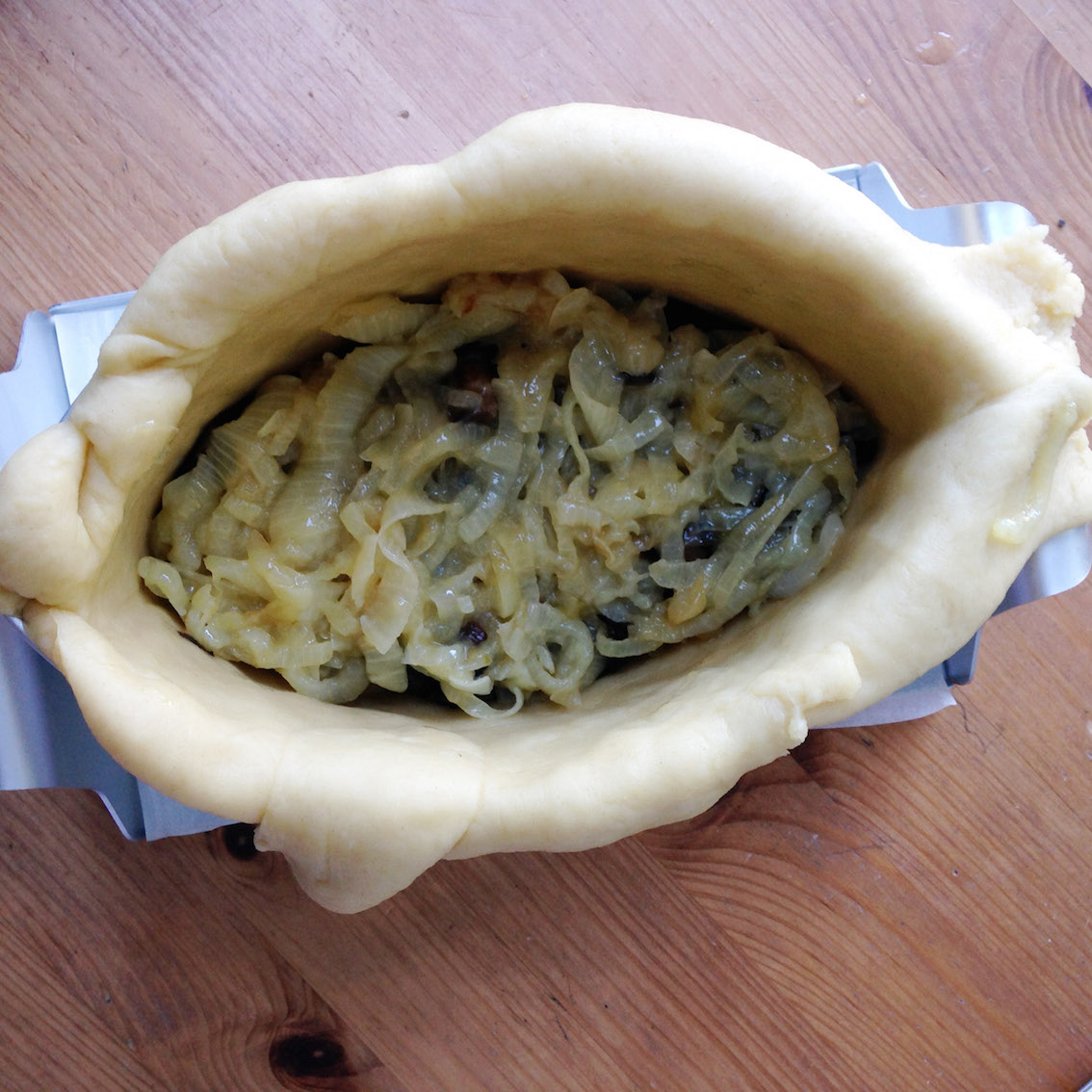 then the caramelised onions 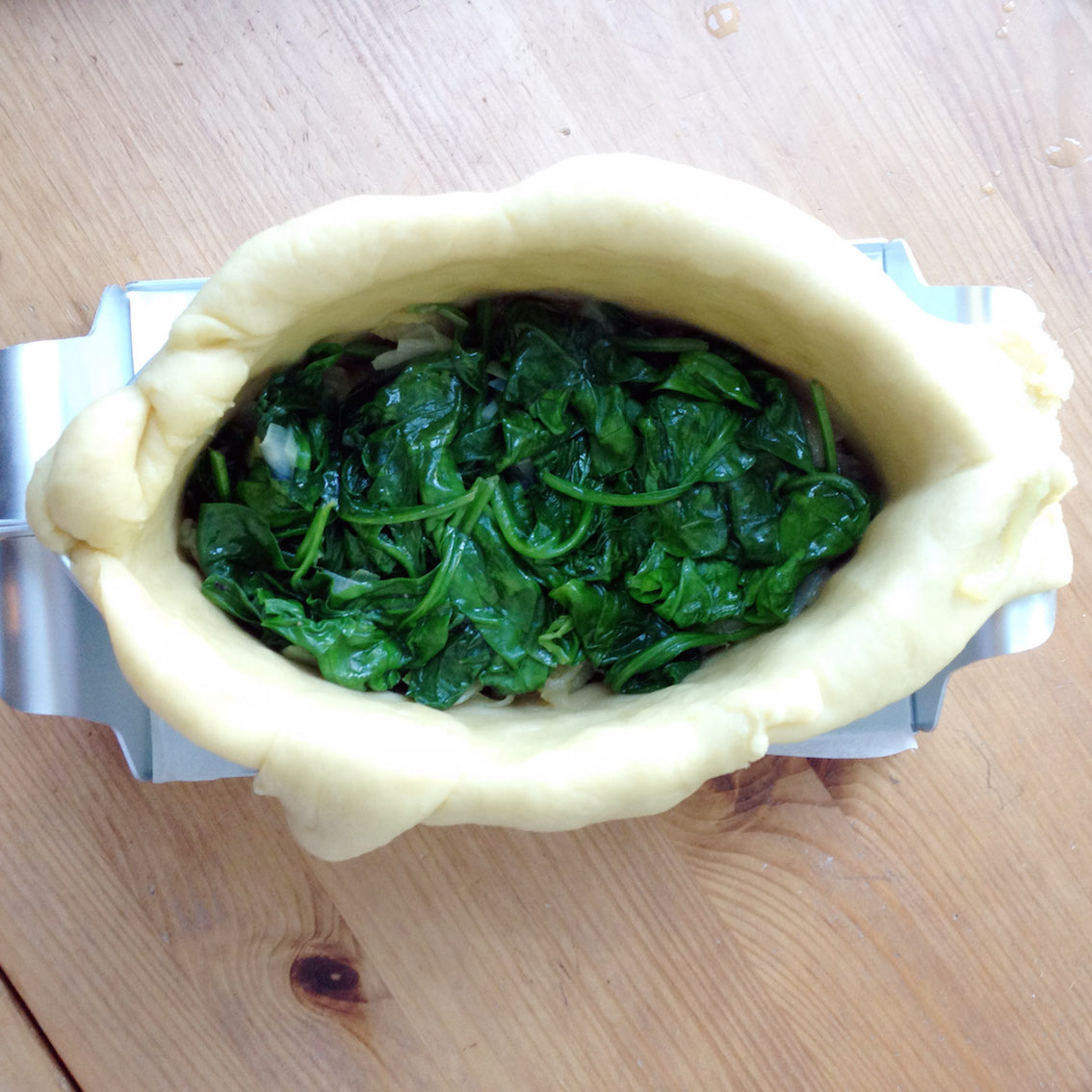 next is a layer of steamed spinach 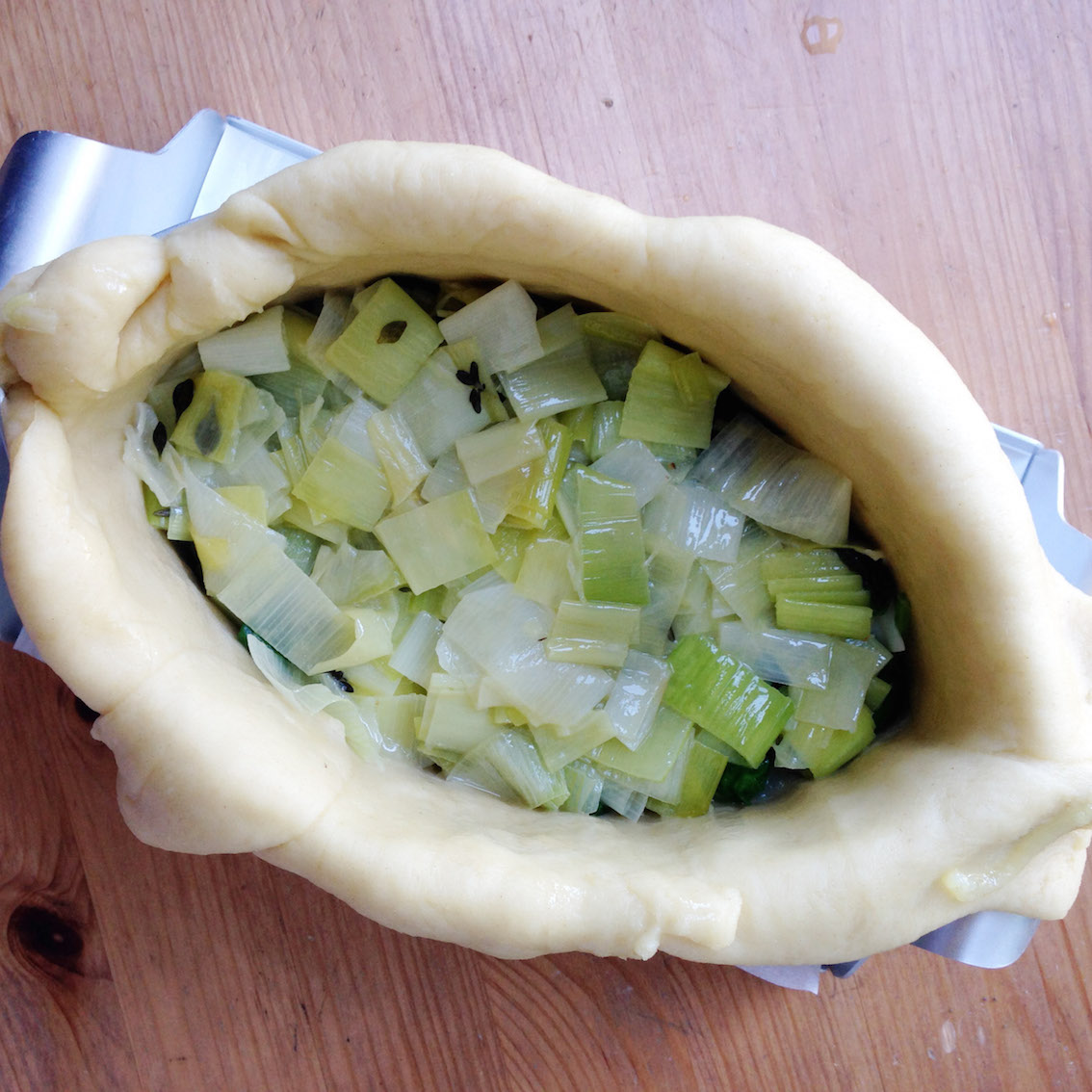 and finally a layer of leeks

lay a layer of mushrooms in the base of the pie, followed by onions, spinach and then leek, then repeat this layer… you should have enough filling to do this 2 or 3 times depending on how firm you push each layer down

roll out the final piece of pastry and lay it on top of the pie… trim the edges with a knife and pinch the top to the sides… then decorate the top as you wish, using water or a little melted butter to seal the pastry

place the pie in the fridge for 30 minutes, then bake for 45 mins, then carefully remove the sides of the tin, brush the sides and top with egg wash and bake again for a final 10 minutes. 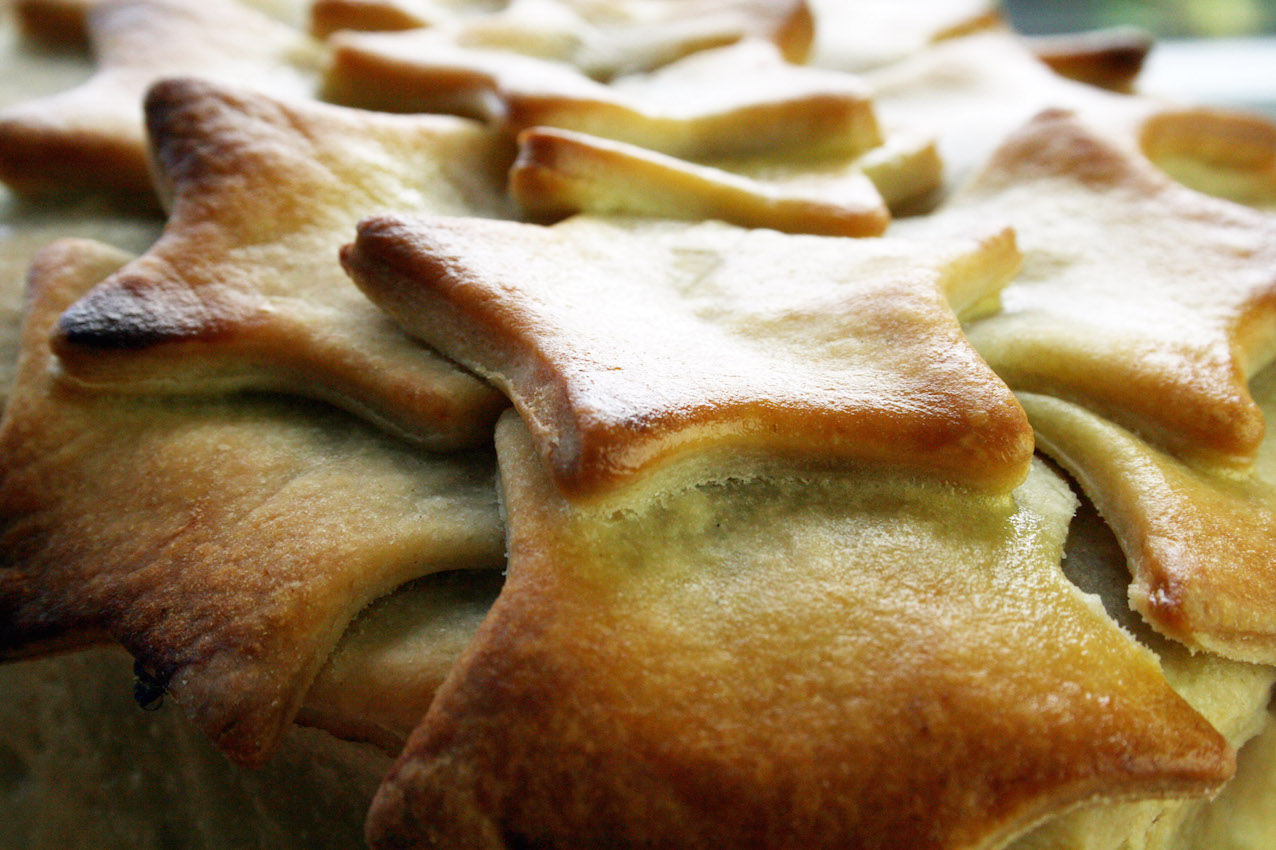