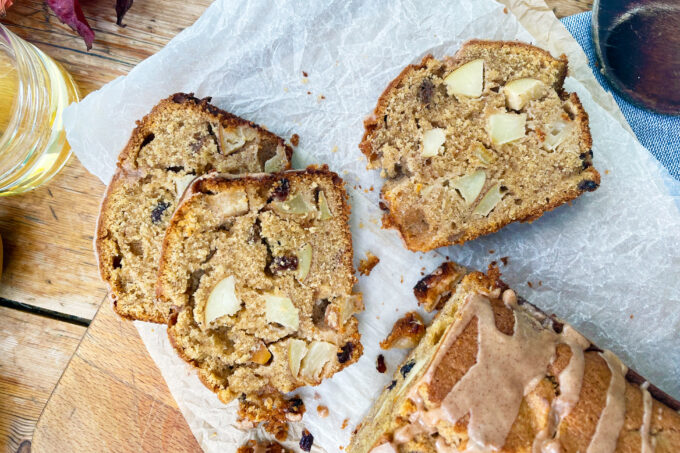 This russet apple, cinnamon and whisky cake is for me, the taste of autumn.  Firstly, the apples.  Hands down, russet apples are my favourite apples. If you’ve never tried them they are a rusty-skinned softer apple that have a taste somewhere between an apple and a pear.  They are sweet but have a sharper tang than a pear.  I love them and we’re lucky enough that our neighbours have a couple of russet apple trees in their back garden.

A few weeks ago our neighbour appeared with a whole tray of freshly picked apples.  She was concerned that they wasps would get them before anyone had a chance to eat them.  They weren’t quite ripe but after about 4 weeks in a draw, covered in a tea towel they are perfection! 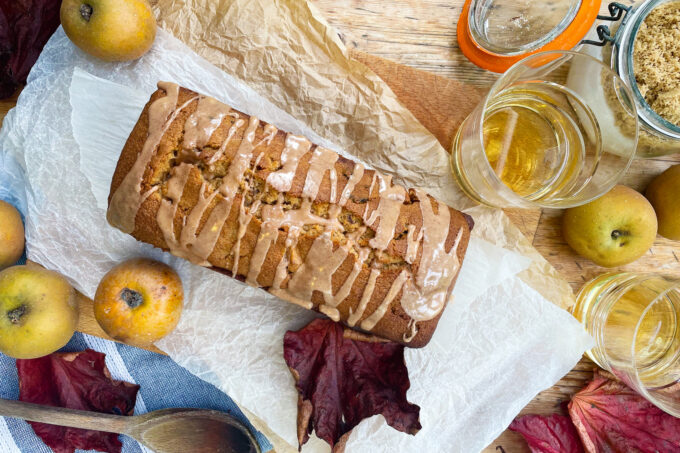 I’ve added a dash of my favourite whisky, Ardbeg Wee Beastie, into the cake.  It has a wonderful smoky bite that works wonderfully with the tang from the apples and the mellowness of the cinnamon.  It also makes the cake wickedly adult, especially with the simple whisky icing which has that fabulous punch you only get from whisky!

Place the mixed dried fruit into a small bowl and add the whisky – set aside. (The longer the better, overnight is good but 30 mins is fine.)

Cream the butter and sugar until light and fluffy – this should take roughly 5 mins in a stand mixer or about 10 mins with a wooden spoon. Then sprinkle in the cinnamon.

Add half the beaten eggs into the batter along with half the flours and beat in for a minute. Once combined, repeat with the remaining egg and flours, then add the milk to slacken the batter slightly.

Fold in the whisky-soaked mixed dried fruits and apples and stir it all together.

Spoon in to the loaf tin and even out the top.

Bake for anywhere between 45 minutes and 1 hour, checking regularly to see if it’s cooked through by inserting a skewer.  Once it’s ready, remove from the oven and let it cool completely in the tin.  If it’s still a bit wobbly but the apples are looking to burn then make a little foil hat for the cake and place it on top whilst it bakes and firms up. 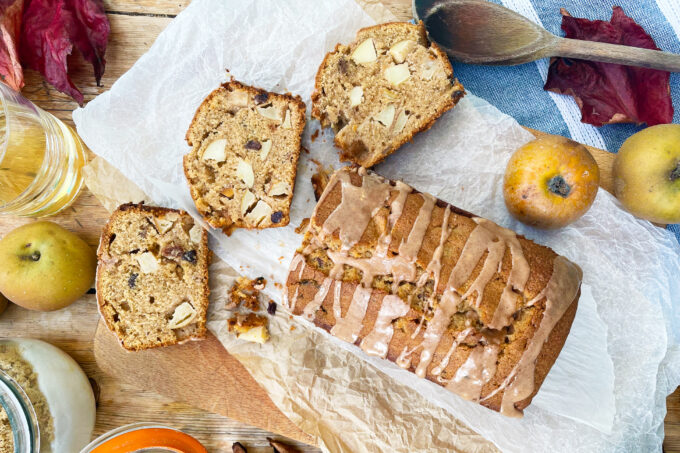