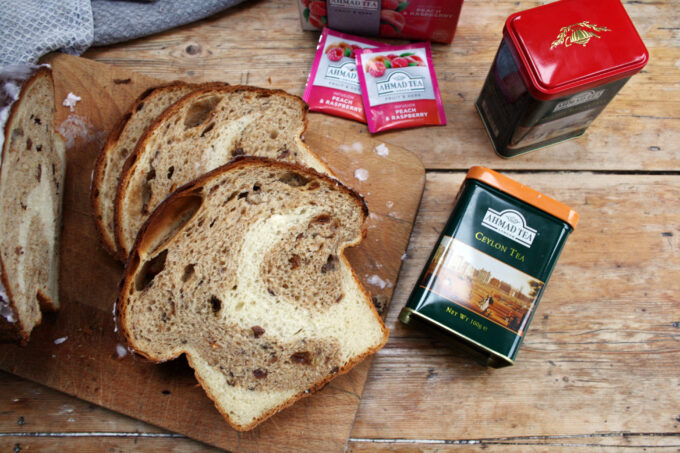 Upfront I need to tell you that this blog post for swirl tea bread has been paid for by the wonderful people at Ahmad Tea.  I love working with them which is pretty brilliant because anyone who knows me knows that I absolutely love tea. I wouldn’t say I was addicted but I imagine it’s pretty close. Whereas The Viking can’t exist without his first cup of coffee in the morning I also don’t feel quite right until the fog of sleep has been lifted by a strong cup of tea.  I will admit however that I am pretty much obsessive about how my cup of tea is made.

So much so that if you offer to make me a cup I would rather say no than take an inferior cup. If it has to be a tea bag then you have to leave it in the boiling water for at least 5 mins before it’s worthy of a drink.  Now that I’ve discovered the Ahmad tea diffuser teapots I’ve not really looked back.  They’re a simple and genius way to make the perfect cup of tea without the hassle. 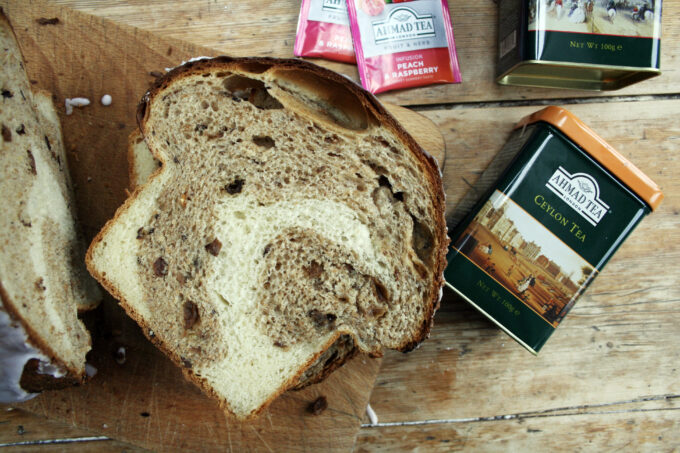 Ahmad tea are a family company founded and run on family values. They only work with the finest tea gardens around the world and view their tea growers as a natural extension of the Ahmad Tea family. Every blend is sampled seven times during the journey from being plucked to your cup – a process overseen by their Chairman, Mr Rahim Afshar, and his team of world-leading Tea Masters. Nothing leaves their tasting room until they are sure it is an extraordinary cup of tea, destined to inspire tea lovers everywhere.

You can tell this is true in everything they sell and even the way it arrives at your door.  The packaging, the essence of the tea and the beautiful tea-ware they sell too. 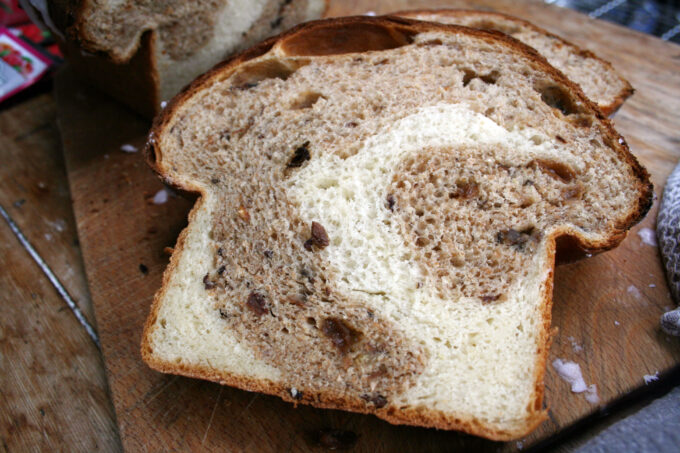 This swirl tea bread is such a clever concept that I saw on instagram a while back and have adapted to work for this recipe.  Esentially you’re making two enriched doughs.  One plain sweet dough and one tea enriched dough that I’ve made with some amazing Ceylon Tea.

for the plain dough

for the tea dough

Start the night before you’re going to bake by soaking the fruit for the tea dough in the tea.  It’s best left overnight.

I used my largest loaf tin which is a 15cm x 23cm x 7cm deep pan but to be honest I could have split it and made two loafs or lots of mini loaves as you get quite a whopping loaf. I think if I made it again I would halve each recipe or make two loaves.

The next day, start with the two doughs. Whilst the recipe is complex it’s quite simple to make and I’d advise to make the plain dough first and then the tea dough next.

Put the flour, caster sugar, salt and yeast into a large bowl and set aside. Put the milk, butter, lemon zest and vanilla paste into a small saucepan and cook over a low-medium heat until all the butter has melted. Set aside until just lukewarm.

Make a well in the middle of the flour mixture, then pour in the milk mixture and add the egg. Mix with your hands to form a rough, soft dough. Tip out onto a lightly floured work surface and knead for about 10-15 minutes until smooth and elastic. (I did this in my stand mixer, using the dough hook on low speed for 10 minutes.)

Next make the tea loaf dough in exactly the same way but add the tea-soaked fruit and cinnamon prior to kneading.  Once both doughs are kneaded place them in two lightly greased bowls and cover with cling film. Leave it to rise for about 1-1½ hours or until they have doubled in size.

Once they’ve risen, tip out the plain dough onto a lightly floured work surface and use a rolling pin to roll it out into a rectangle that is slightly narrower than the longest side of your loaf tin.

Then roll out the tea dough into the same shape and place it on top of the first dough.  Roll the two doughs up together into a log and quickly shift them into your lined loaf tin.  Place some cling film over the top and set aside for 30 mins whilst you pre-heat your oven to 200c (fan)

To make the simple glaze make a cup of tea using your favourite fruit tea.  I’m using the lovely Peach and Raspberry Infusion. Let it cool completely then pour a tablespoon of it over the icing sugar and stir.  You want a really thick consistency like you’d get on an iced bun.  Pour it all over the top of the cooled loaf before serving. 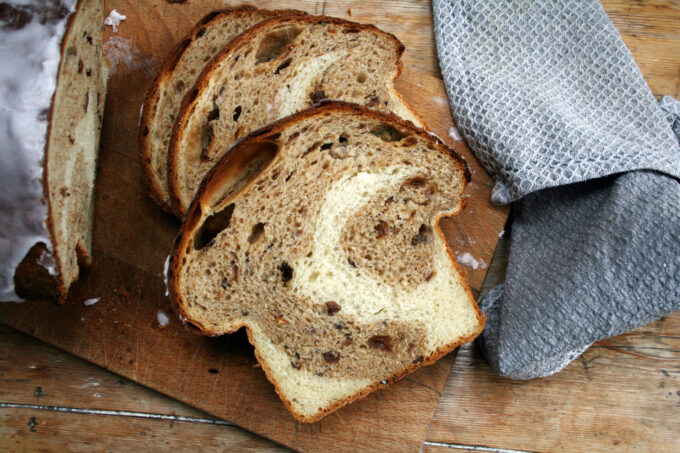 For more tea loaf recipes check out the recipes on Dom in the Kitchen.