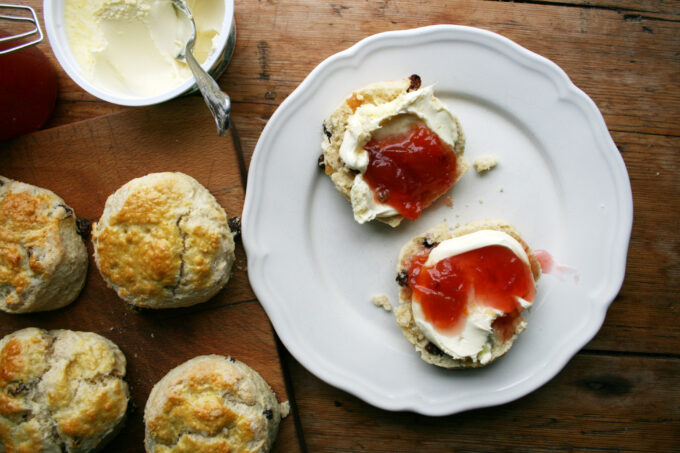 It’s all gone very Women’s Institute here in Belleau and these almond fruit scones with plum jam and pretty much the icing on the cake. I’m really not a jam maker but I had some plums that just weren’t doing it for me in the taste arena and some of them were going a bit brown but I thought they’d make wonderful jam and I wasn’t wrong.

The jam recipe comes from the delightful Janice over at Farmergirl Kitchen.  It’s an absolute classic. Before you make it it’s definelty worth popping over to her blog to read up on the methods and methodology of jam making. 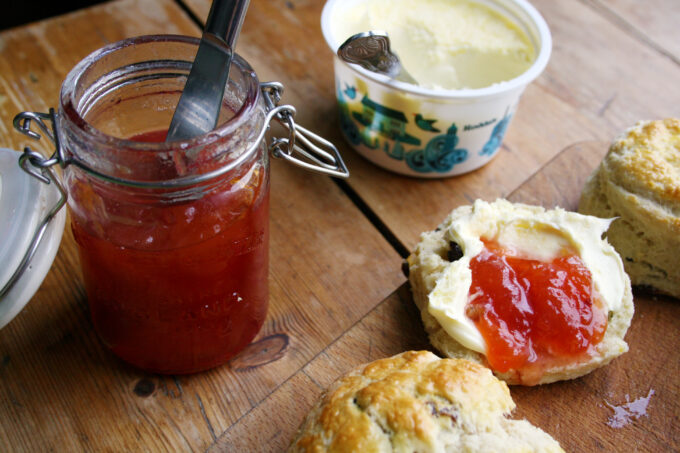 As for the scones, well this is where we have a bit of a twist.  I’m using some ground almonds mixed into the flour which gives the scones a slightly different texture. It gives them a sort of ‘pudding’ quality but it actually works really well.  To be honest as I’ve always said the scone really is just the vehicle for the clotted cream and jam so whatever works for you.  I love the added boost of lemon juice as you can really taste it as you bite in and t cuts through all that sweetness really well.

I have so many different scone recipes on the blog, worth checking them out here. 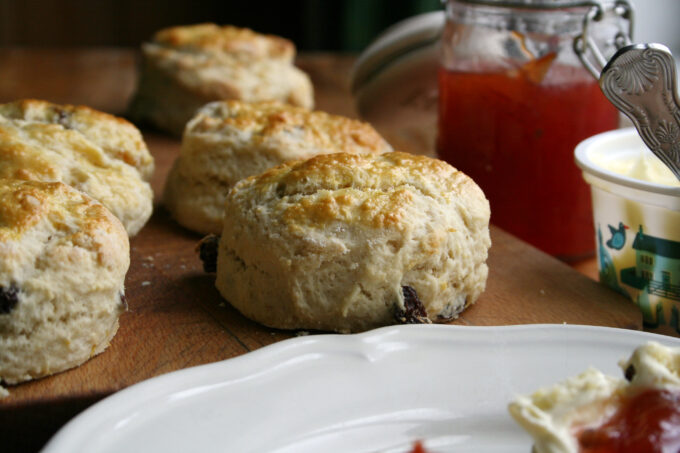 for the plum jam

for the almond fruit scones

Let’s start with the jam – Halve the fruit and remove the stones. Wash your jars and place them in a low oven to sterilise for about 25 mins. Remove carefully with an oven glove and set aside.

Place a small plate into the fridge – this is for the ‘set test’.

Put the plums into a large pan with the water and cook gently until the plums are soft but not disintegrated. This sbnould take roughly 10 mins.

Add the sugar and lemon juice and stir until the sugar has dissolved.

Bring to the boil, and boil rapidly, (a rolling boil) for at least 20 minutes, then remove from the heat. After 5 minutes test for set. Grab your cold plate from the fridge and drop a couple of teaspoons of hot jam onto it.  Place the plate back in the fridge for 5 mins.  After this time, use your index finger to gently push the jam across the plate.  If the jam wrinkles and a clean path is left behind your finger then the ‘setting point’ has been reached.  If it hasn’t done this then boil the jam again for another 5 mins and re-try the set test.

When setting point has been reached, skim off the most of the froth (scum) into a bowl (you can still eat this, it’s not dirty just frothy) then add the knob of butter which will disperse the remaining scum.

Let it cool for about 15 minutes so the fruit settles and doesn’t sink to the bottom of the jars.

Ladle into sterilised jars and leave to cool before sealing.

To make the scones, Pre-heat the oven to 200C fan.

Tip the self-raising flour into a large bowl with a pinch of salt and the baking powder, then mix.

Add the butter, then rub in with your fingers until the mix looks like fine crumbs. Stir in the caster sugar.

Pour in the milk and squeeze in one half of the lemon, along with the lemon zest and the dried fruit.

Combine it quickly with a cutlery knife – it will seem pretty wet at first but will come together.

Scatter some flour onto the work surface and tip the dough out. Ensure the dough and your hands have flour on them, then fold the dough over 2-3 times until it’s a little smoother. Pat into a round about 4cm deep. Take a 5cm cutter and dip it into some flour. Plunge into the dough, then repeat until you have four scones. You may need to press what’s left of the dough back into a round to cut out another four.

Brush the tops with a beaten egg, then carefully arrange on the hot baking tray. Bake for 10 – 15 mins until risen and golden on the top. Let them cool on a wire rack.  They won’t stay fresh for more than 48 hours in an air tight container or they will freeze well. 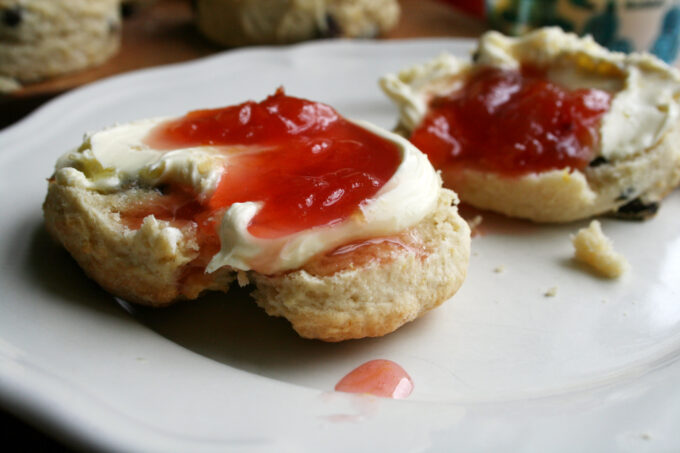 Slather with cream and plum jam, eat and of course, enjoy!