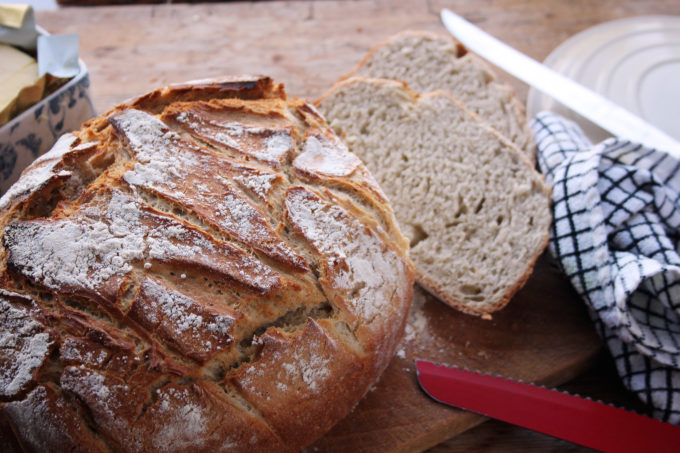 This week it was The Vikings turn to be sick.  His was one of those dreadful flu-like colds where your body simply aches and your head is stuffy. With my immunity at an all-time low I decided very quickly to hot-foot it back to London and allow him to recover alone.  That sounds a little harsh but actually a little alone time is sometimes just what the doctor ordered – although on this occasion he’s actually still clinging to the cold and i’m now back at the cottage avoiding him as best I can.  It’s always funny coming back into your home when one of you has been away for a few days and the other has clearly nested; Little pools of blankets surround one well-loved sofa, the TV remote has found friends with the DVD player remote and the playstation games console and an assorted collection of bowls, plates and mugs lead a trail from sofa to sink.  The best thing is that the fire has been on all week and the house has shaken off any of its cold-wall syndrome and the weather has suddenly turned slightly arctic this week so it’s all very comforting.

I’ve really not been in a cooking mood recently but I do love and continue to bake bread weekly.  I’ve had mixed success over the past few weeks.  My loaves have been OK but nothing special.  I think it’s partly my sickness (they say you should never make bread if you feel unwell) and i’m sure it’s partly my lack-lustre feelings toward food in general… but this week I thought i’d try something new and shake it up a little. 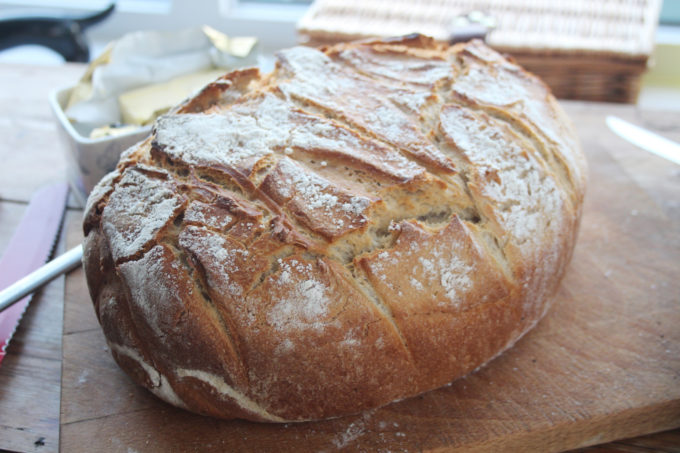 This loaf is inspired by a recipe from Donna Hay.  Now Miss Hay is not one of my favourite celebrity cooks but I happened to be bored very early one Sunday morning and her Basics to Brilliance show was on TV and I found myself intrigued by the way she made this bread.  It’s baked in a casserole dish, with a lid, in the oven.  I occasionally use a small round casserole dish when I bake my basic white loaf but I never do it with the lid on, so this is new to me. Plus she also didn’t allow the dough a second rise after shaping – it went straight into the oven, so I really wanted to give it a go to see how it would turn out.  Plus I love the nutty flavour of spelt flour so was more than happy to try it.  However, I couldn’t find a recipe for it anywhere so I had to go  back and re-watch the TV show closely.  I was wary of the large amount of flour used as this is almost what i’d use for 2 loaves but spelt and rye flour are quite unusual beasts, so I went with it.

I’ve gone with just over half spelt and the rest rye flour as I adore that heady taste of rye and it works really well with the spelt which has such a lovely nutty flavour.  I’m so pleased with how this has turned out… a great texture, and it’s a large loaf which is actually brilliant for this weekend, it’s packed with nutty flavour and yet is light enough to be totally versatile… I shall be making again!

i’m using my Smeg stand mixer with a dough hook for this but of course it can al be done by hand – same kneading time, just more effort and it’s quite a wet dough so I always prefer to use the mixer and dough hook to avoid the mess! I’m also using my large, 33cm oval-shaped casserole dish with a lid – it’s a cast iron le creuset but any dish, any shape will work, this is what I had.  Donna Hay used a round one.

put the water, honey and yeast into a jug, mix to combine and set aside whilst you weigh out and then place the flour and the salt in a mixer.  Turn it onto a slow speed and start pouring in the yeast mixture and the olive oil in a low steady stream. Knead for 10 minutes or so until the dough is smooth.

transfer the dough into a large, lightly oiled bowl and cover with a damp towel. Set aside in a warm place for  1 or 2 hours, or until it has doubled in size. (mine took about an hour and a 1/4 sitting next to the fire on a cold winters day.)

meanwhile, preheat the oven to as hot as it will go, mine goes up to 250C, then place your casserole dish into the oven for 30 mins.

once the dough has risen and you casserole dish is hot, carefully take the dish out of the oven and dust the inside generously with flour, then turn the dough out on to a floured surface, and shape into a rough oblong shape using floured hands and carefully lift and transfer the loaf into the hot pan.  Dust the top with flour, and score with a sharp knife. Cover with the lid and bake for 30 minutes.

reduce the temperatue to 220C, uncover the loaf and bake for a further 20 minutes or until golden brown and the bread sounds hollow when tapped. 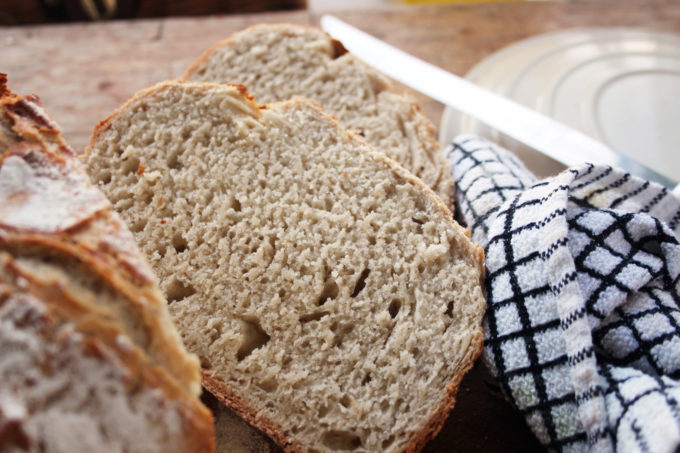 set aside to cool entirely before tearing apart, then simple eat and of course, enjoy!