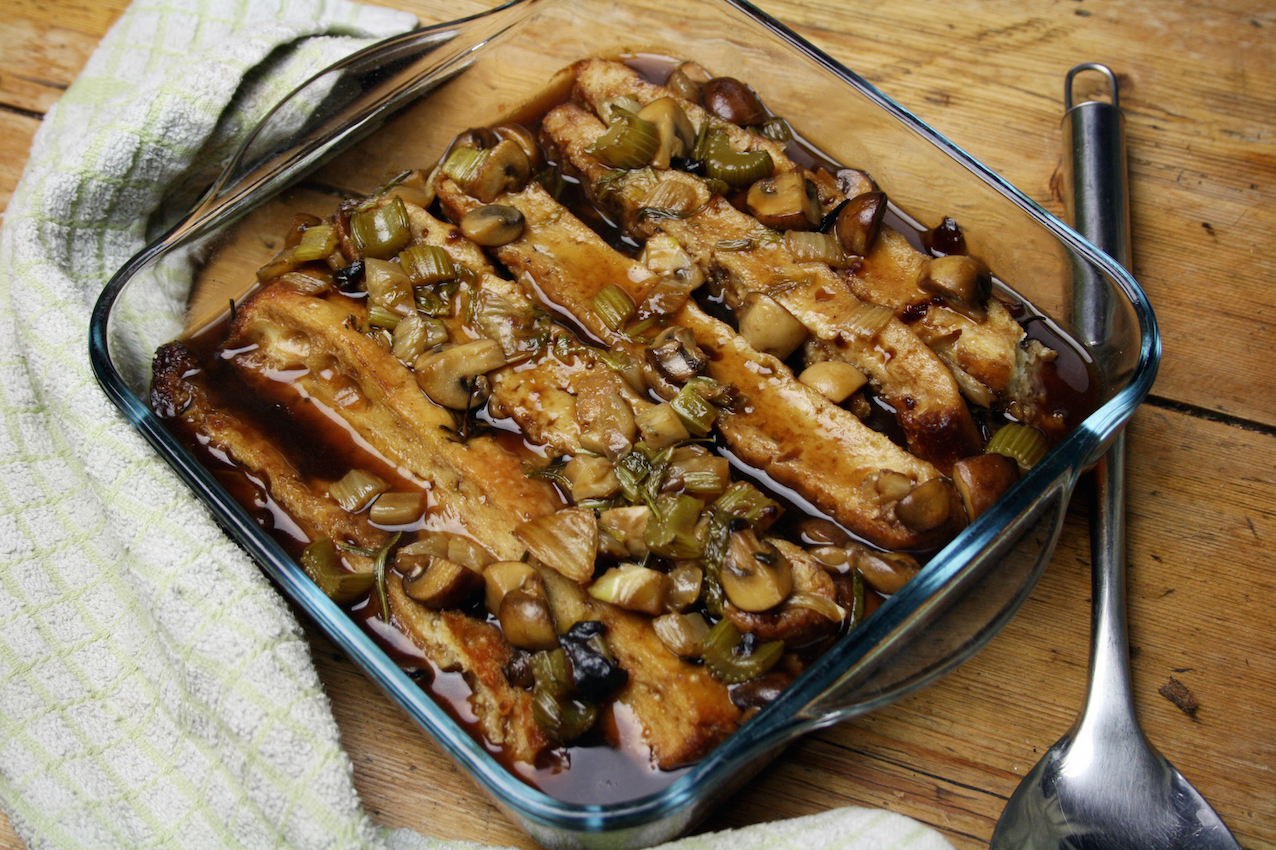 … so even though we’re busy at work, we’re trying really hard to come back home to the cottage as much as we can.  This usually means late on a Friday or if we’re really lucky then a Thursday night but it doesn’t always work this way.  I’m not complaining of course it’s just that it means I spend much of my weekend cooking and developing recipes for the blog so that I have enough posts to go out during the week.  I love being at home in the kitchen and even in these older months it’s the best place to be in the house as inevitably the oven is always on keeping me in and cosy… but if course time is scarce so, dear reader, you find me tonight as I write this blog post from the car.  Don’t panic – The Viking is doing the driving as I bash away at the keyboards, cursing at my dodgy 4G connection from my tethered iPhone.  It’s so funny, I feel that i’m at the age where i’ve always been at the forefront of technology; we were the first in the school to be taught how to use computers back in the 80’s, the first to get an email address and the first, albeit reluctantly to get a mobile phone and I think I was an early adopter when it came to blogging so I find it quite frustrating that mobile wifi technology isn’t a little further on than it is… I know, I know, I shouldn’t complain, the technology is really quite astounding, I mean come on, I’m blogging from the car for goodness sake but I guess my patience is stretched and I want it all to go a little faster so that I can go a little slower when I get home… 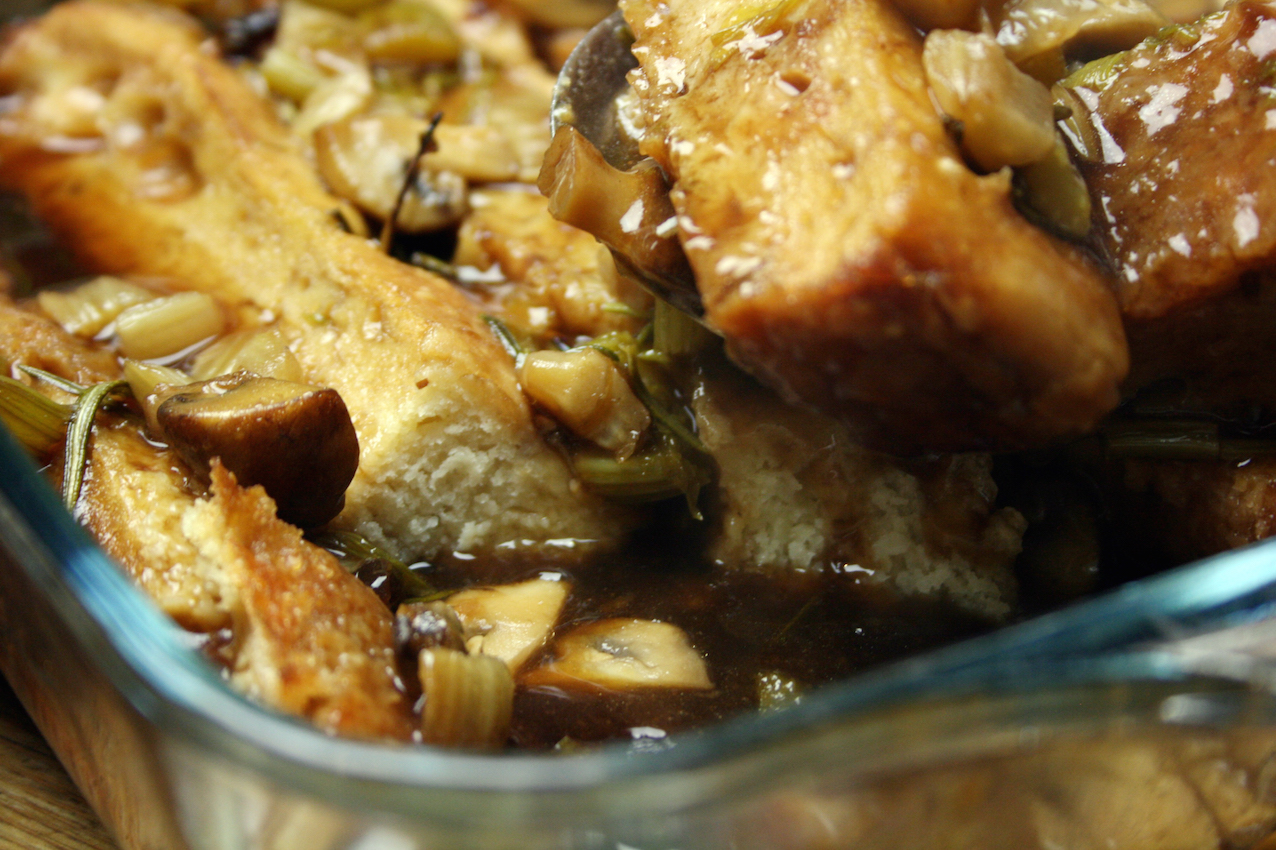 focaccia and mushroom ‘bread and butter pudding’
you know sometimes you just need comfort food and nothing else will do plus it has to be tasty and it has to be fast, well this is it… kind of.  Of course the making of the focaccia isn’t quick but you can cut this hand-made step out really easily by picking some up in a store but everything else is pretty damn simple to drag together… i’m even using gravy powder here folks… proper comfort food!  There is a story behind this dish that i’d better explain just in case you think i’ve gone completely mad.  So I got back to the cottage last Friday and I was desperate to bake some bread.  We wanted fresh bread for breakfast the next morning and in my haste to bake I made the choice to not worry that I didn’t have enough yeast for one loaf, let alone two.  I thought i’d get away with it but actually the final prove didn’t work too well, so I made focaccia.  It was OK but a little too doughy and so The Viking suggested I make a savoury bread and butter pudding with gravy instead of custard… such a simple idea… such an obvious suggestion… damn him for his northern upbringing and the idea that bread and gravy could be better than anything in the world!  The Viking would have been happy with just that but I thought it would benefit from the inclusion of some saluted onions and mushrooms to make it into something more than a side-dish…

start with the focaccia – place the flour, yeast and salt into a very large ceramic bowl and then pour over the water and bring it all together with a rubber spatula until you have a sticky mess – clean the spatula as you’ll need it again shortly, then cover the bowl with a tea towel and set aside for 10 minutes

drizzle a generous amount of oil onto your work surface and spread it around with your hand, then with the oiled hand remove the dough from the bowl and place it onto the oiled surface, use the spatula to scrape out the bowl. Take some oil and drizzle into the bowl and wipe around the inside of the bowl. Now knead the dough 8 times then place back into the bowl, cover with a tea towel.

oil your surface one final time and remove the dough from the bowl and punch it down, fold it over itself and punch down again, turn one quarter, fold and punch, repeat twice more and set aside

sprinkle some olive oil into both baking trays and spread around with your hands, now cut the dough in half and place each half into one of the baking trays and push it out to the edges… it won’t fully cooperate but play with it quite freely and it will stretch, then set aside for 30 mins and during this time it will fill the trays and rise a little

oil your finger and push regular indents into the dough, then take a small sprig of rosemary and place it into each hole

bake on 190C for 20 mins or until it starts to turn golden then remove from the oven and generously drizzle the top of each focaccia with more olive oil and then sprinkle with salt… you can be as generous as you like here, I like it very salty.

allow the focaccia to cool completely before slicing thickly and laying into an oven proof dish
meanwhile, heat a large pan and melt some butter and olive oil and gently saute the onions and celery until soft then add the mushrooms and fresh rosemary and plenty of pepper for roughly 10 minutes until the mushrooms are soft and have golden edges, turn up the heat and add the gravy, stock and wine to the pan, stir and let it bubble away for five minutes
carefully pour the gravy all over the cut focaccia, cover with foil and bake for 20 minutes on 170C, then take the foil off and bake for a further 10 minutes 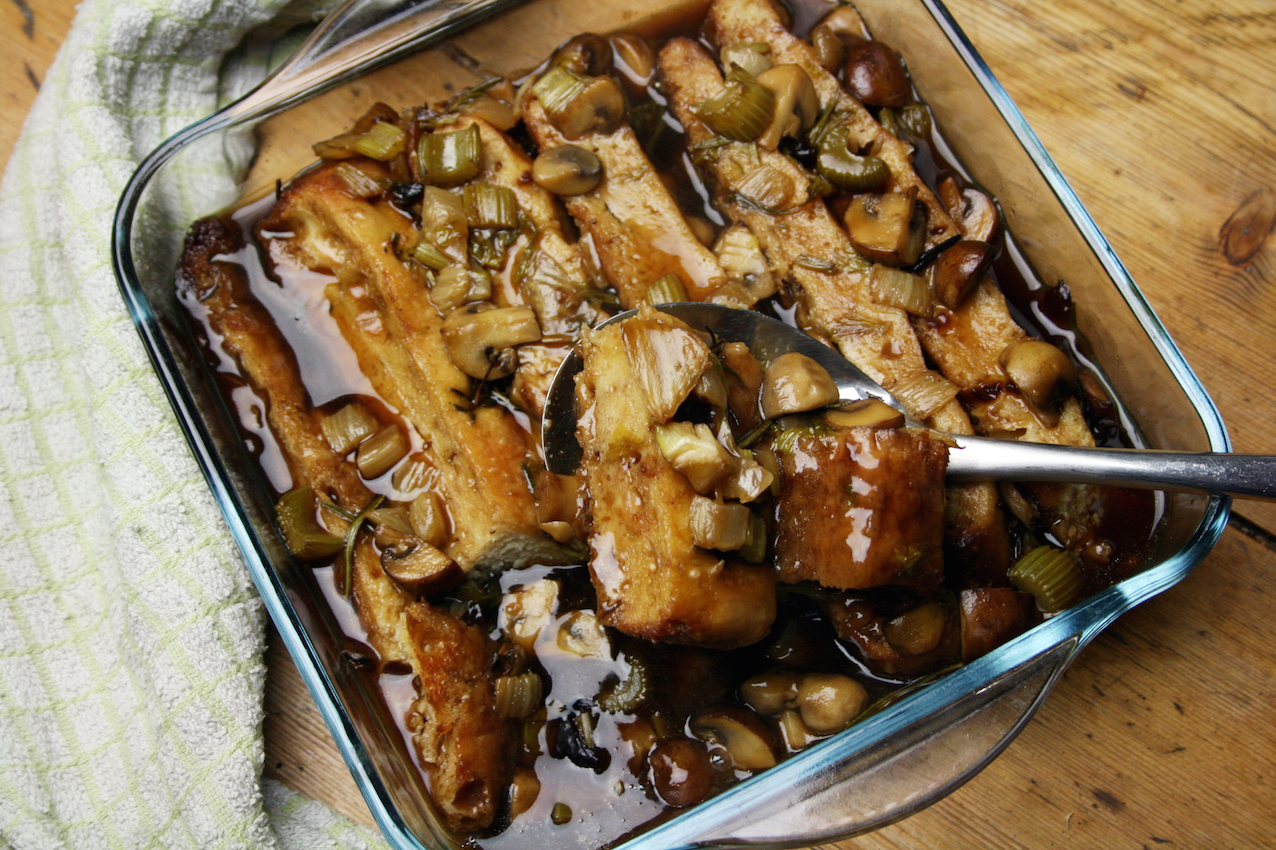 serve immediately with peas and carrots then eat and of course, enjoy!