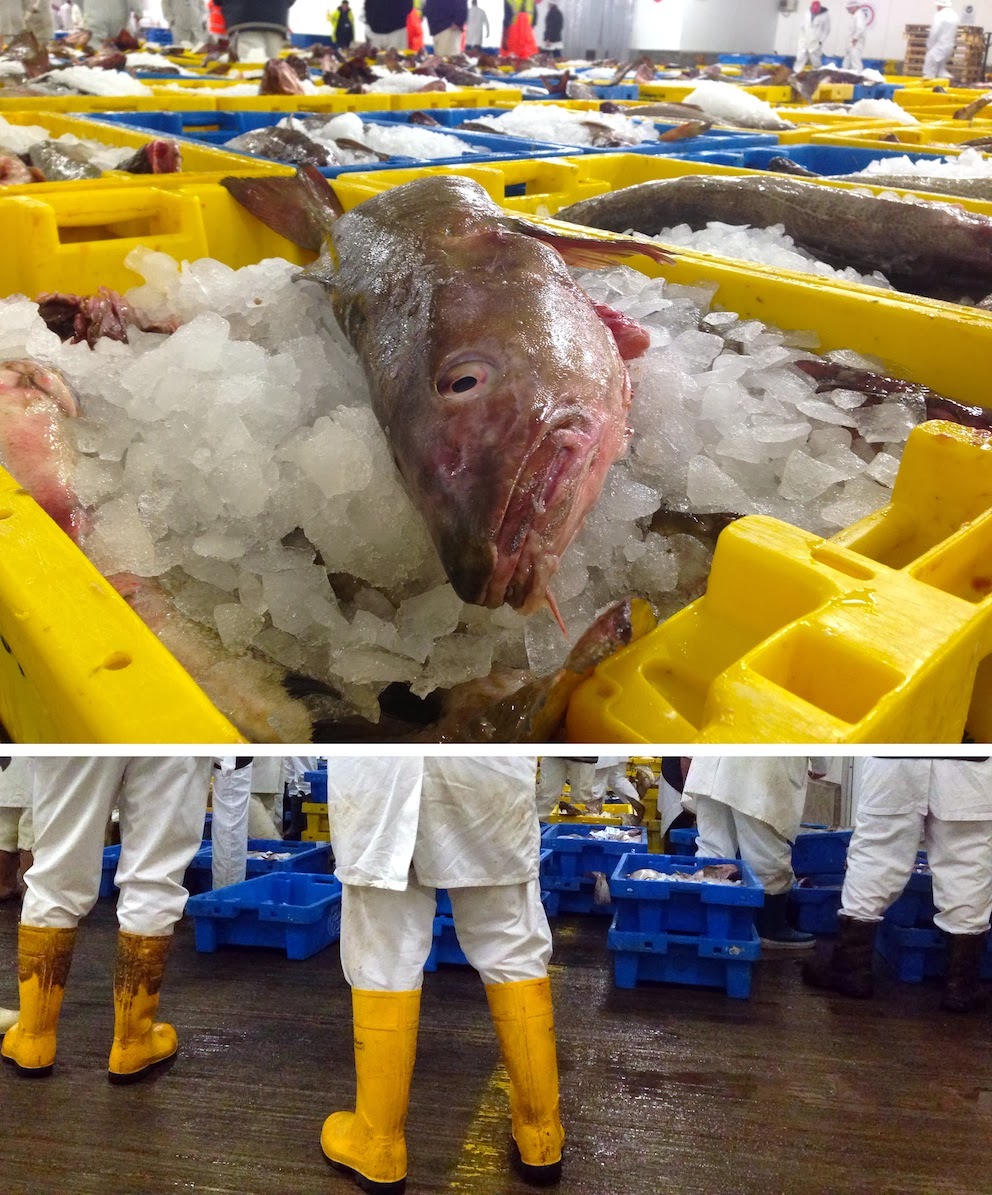 Food Heroes  – Dave Tummey, Russell’s Smokehouse
this is an edited version of an article which appear in November’s Lincolnshire Life Magazine
It was a very early October morning that I left the comfort of Belleau Cottage and set off in twilight to visit the hardworking men at Russell’s Smokehouse in Grimsby and as the sun began its slow stretch up from its slumber and the sky began to lighten I realised that I was as giddy as a schoolboy at the prospect of the visit… you see I simply love smoked fish!
Smoked fish was always a staple in our house when I was growing up, whether it was smoked haddock in my mum’s incredible creamy fish pie or smoked salmon in my grandma Jennie’s fishcakes or simply poached in a little milk and served with mashed potatoes our whole family loved it.  I guess it was the fact that mum grew up on the other side of the Humber in Hull that established her love of fish and of course my grandparents came from an age when smoking fish was done simply to preserve the fresh catch to last into leaner times so it was natural that they would all pass their fondness for the smokey goodness on to me.

Russell’s Smokehouse has been in business for nearly 100 years and is now one of the last remaining traditional fish-curing smokehouses in the UK.  Joe Tummey started working there in 1946 and didn’t retire until he was 76 years old.  It is truly a family business as his Son Peter bought the business in 1982 and his grandson Dave is now the manager having started work there at the tender age of 13.
I started my morning not at Russell’s Smokehouse but at the Grimsby Fish Market where I was met by fellow fish-lover David Markham, representative from Seachill, the company who now own Russell’s as well as popular new brand the Saucy Fish Company.  David wanted me to see the complete cycle of the fish-smoking process and other than a trip on a North Sea fishing trawler the best place to start is at the market.  As we’re all too well aware the fish market is not the bustling place it use to be but it still serves a very important place within the food chain with representatives from all the major fish companies buying at the auction.  It was a frenetic experience to say the least and quite bizarre to be greeted by the ugly smiles of the cod so early in the day but I’m glad I saw how it all works.  I was also fortunate enough to see some of the fishing boats in the dock, moored up for the winter. 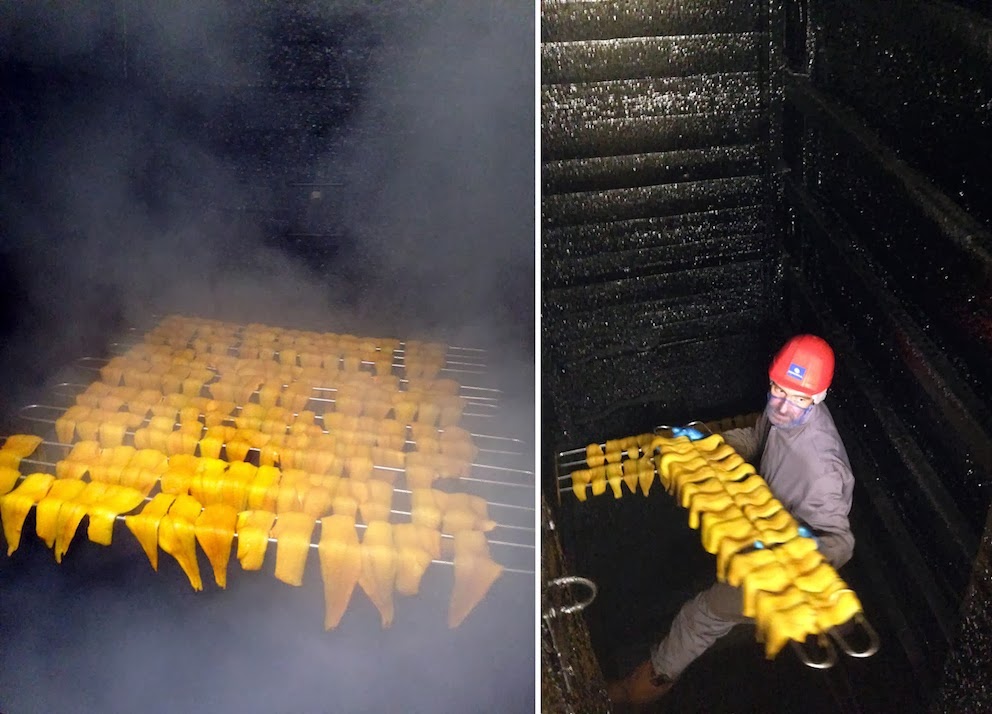 Now we had the fish it was time to visit the smokehouse itself and a short drive away we could see the chimneys of the smokehouse hard at work and more importantly we could plainly smell them too.  I love the aroma of the smoking process, it has a textured richness to it that is clearly unmistakable yet it’s not an intense aroma, more deep and woody and yes of course a little fishy.  The building itself is actually listed as a heritage site and even though the inside is now clad in hygienically reinforced walls it would have at one time been beautifully lined with wood.  Fortunately the chimney’s themselves are still the original stacks which becomes clear when we peer inside to see the walls thick with a century’s worth of glorious black tar.
The curing process is relatively simple.  The fish arrives from the market filleted and is first brined in iced saltwater for a few minutes before being draped over the ‘horses’ which are simple metal frames.  Some of the fish is dyed using a vegetable based yellow dye.  The dyeing technique was originally done to mask any discoloured fish that may have been sent to the smokehouse and whilst the quality of the fish has improved to make this process unnecessary some of the fish is still dyed for tradition as many people still expect to see the yellow fish. The chimneys are lit very early every morning in a sawdust filled pit at its base.  The fire is matured slowly to create more smoke and less heat and then the fish are stacked up to 17 layers inside the chimney, this job is still done by hand with the men harnessed in for security as they straddle the brackets with their feet.  The fish is then slow smoked overnight for up to 15 hours and is then ready to be chilled and packed for us all to enjoy. 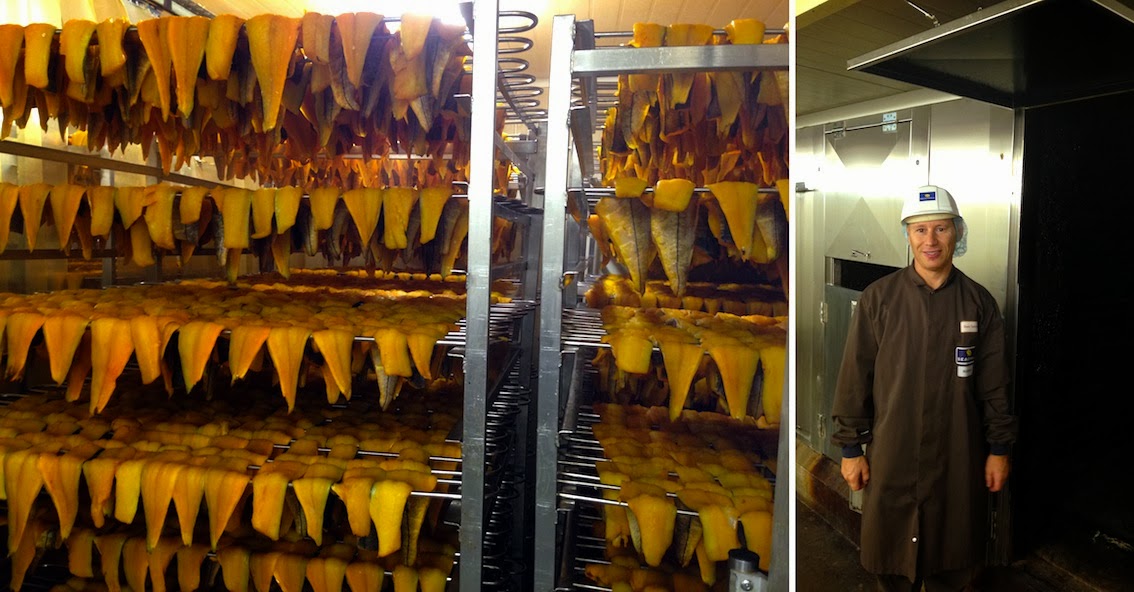 It was an incredible day and wonderful to yet again meet people so passionate about their contribution to our food enjoyment.  Fortunately for us the future for Russell’s looks rosey as in 1999 the company was bought by Seachill who essentially saved the company from the same fate as nearly all the other smokehouses in Grimsby and now their glorious fish can be bought in Tesco stores up and down the country as part of their Tesco Finest range.