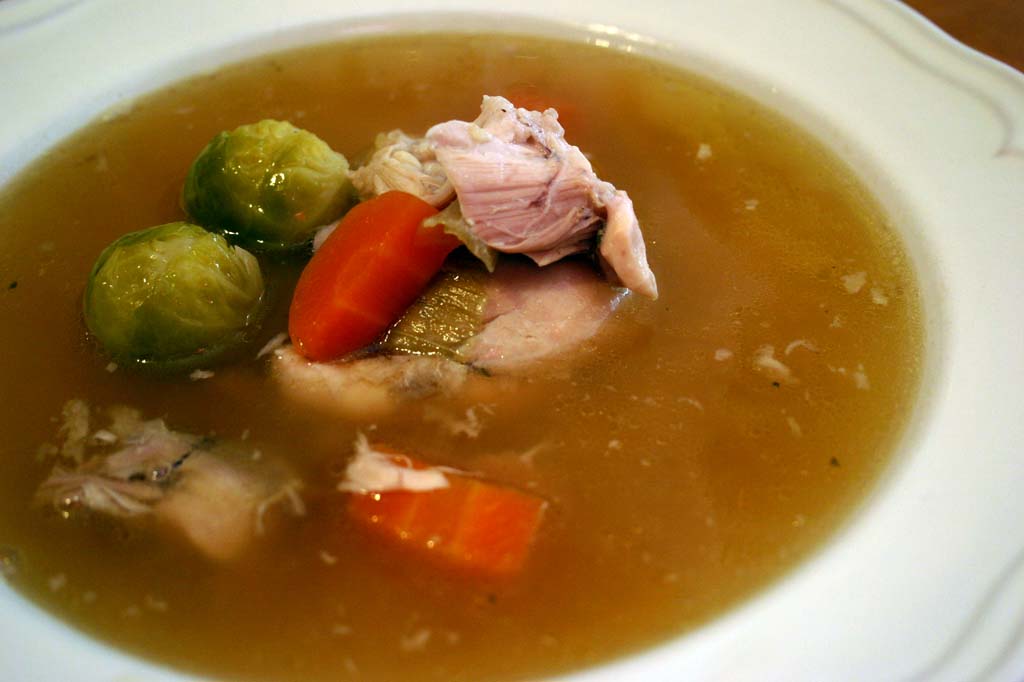 …or ‘rendered chicken fat’ which is a key ingredient to perfect knaidlach… are you following so far?

… the facts are these… the chicken really does make all the difference and therefore you should buy the best chicken for the job and this should be a kosher pullet, which, unless you raise your own chickens is pretty unlikely you’ll be able to find… so the next best option is a broiler… your butcher will know… but if he doesn’t then a whole free-range chicken will work… but keep it small and whole…

… and the other main thing to get the ultimate flavour is to cook it long and slow… this will give you the intense depth of flavour and golden honey colour that you’re after… other than this, quite frankly, add what you like… traditionally it would be quite simple… carrot and onion… lots of peppercorns… and some lovely small knaidlach if you fancy… these little balls of light and fluffy matzohmeal are heaven in a bowl and will soak up the taste of the chicken soup and be un-like anything you’ve tasted before!

… as is always typical with my cooking, I thought I had matzoh-meal in the cupboard but when I went to make the knaidlach I realised I didn’t… so there are none in this picture, but the memory and more importantly the recipe is there… and whilst there’s absolutely no substitute for a knaidlach and I know my Jewish friends will really laugh at this but I did throw in some brussel sprouts… just for the shape!

naturally i’ve gone my own way here… but the essence is there and the flavour is intense… infact the smell permeating the cottage is mouth-watering… and in the true Jewish traditional way, you’re all invited over for a bowlful… dinner is served!


2 beaten eggs
2 tablespoons of schmaltz (you can use butter or olive oil as a substitute)
1 cup of medium matzo meal
1 dessertspoon ground almonds
1 cup boiling water
salt and pepper
a dash of cinnamon (this is an extra, which some people may not like, but I love)

– for the soup, simply place everything in a large pan, add water and a couple of sprinkles of good quality vegetable stock such as Marigold Bouillon  and let it slowly bubble for at least 2 hours

– once the soup is nice and golden, remove from heat and take out the chicken and the veg… you can also skim off some of the chicken fat as it floats to the top of the pot, but to be honest, I love this and think it adds to the flavour.

– many people like to serve it as a clear broth with a couple of knaidels floating in it, but I like to tear the chicken meat from the bones and return these with the vegetables and have a heartier soup

– to make the knaidlach, simply mix all the ingredients together thoroughly and shape into small balls… refrigerate them first before you add them to the soup about 10 minutes before you wish to serve them.

… in my opinion this is the best reason to be Jewish…