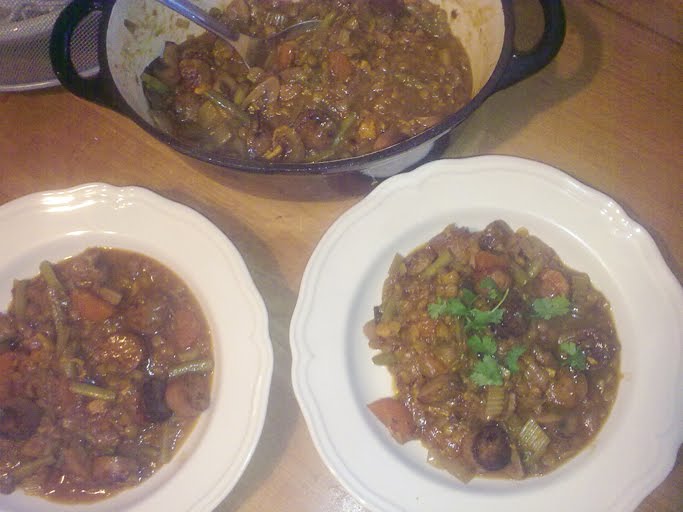 how quickly it turned from Spring back to Winter!  One minute the sun was streaming in through the windows, the doors open with a balmy breeze gently blowing into the house and the next minute the wind changed.  The gloomy, heavy and slightly angry looking clouds swept over and the cold… oh the cold… I am literally sitting here with a blanket wrapped around my legs whilst The Viking sleeps in front of Indiana Jones (not that we had Mr Ford was in the room, you understand… it’s just we were in a Sunday afternoon movie kind of mood… even though it’s Saturday)

We are even contemplating the log fire… I know!

so I felt a pot of warming stew was in order for tonight so i’ve raided the old vegetables in the fridge.   This really is the kind of stew you can add anything you have to.  As you’ll see, what I have is a mixed bunch, but this would take any medley of vegetables, just start with an onion and if there are no vegetarians in your household then use a good quality sausage and cook in exactly the same way…. anyway this is what i’ve come up with:

For the stock:
2 glasses of red wine (one for you and one for the stew ha ha!)
a good quality vegetable stock
a teaspoon of gravy powder (yes I know this is cheating but you’re using it for its thickening qualities rather than it’s flavour
a glug of ketchup (the number one secret ingredient of most chefs – I read that in a book…)

So first, in a large stew pan, fry the sausage slices till golden brown and set aside, then fry the mushrooms and set aside. (the frying of both these ingredients adds flavour and texture to the finished pot, it’s the equivalent to browning the meat in a regular stew)

next, in the same (but empty) pan saute the onions in some butter and olive oil, then add the rest of the veg and the herbs (except the green beans as these are nice to add some colour and freshness later on) and let it all sweat  on a low heat, with the lid on for about 10 mins.

next add the glass of wine to the stew and let the whole thing simmer for a moment in the red wine.

now add the sausages and mushrooms back into the pan with a pint of good veg stock to which you’ve added a teaspoon or so of gravy powder and a glug of ketchup.

then, on goes the lid and on a very low heat let it stew for 30 mins, at which point you add the lentils, the green beans and a little more stock.

now, at this point you have 2 cooking options… officially it will be ready to eat in another 30 mins, but you want to let it stew on a low heat for as long as possible.  You could even put it into the oven on a low heat and let it cook away happily, making sure it doesn’t dry out.  What I like to do is cook it for an hour in the morning and then heat it up again for a long slow hour before I want to eat it that evening – or even the next day for more flavour!

perfect for a miserable spring evening… bring on the rain.

serve into bowls eat and of course, enjoy!