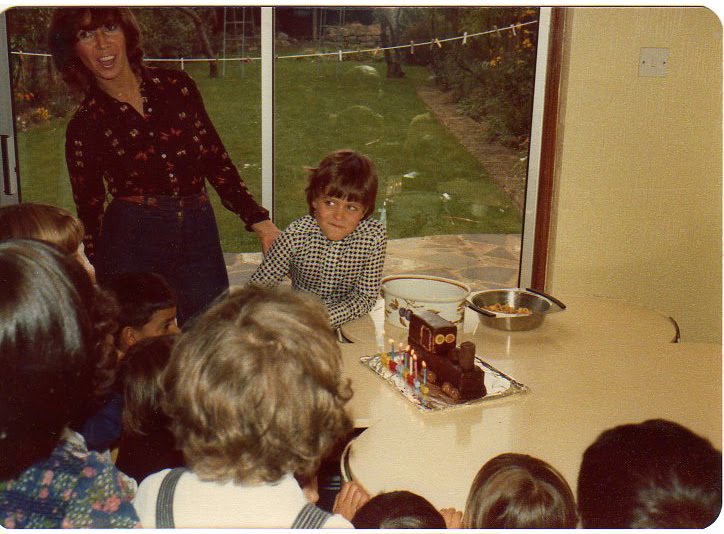 me and mum on my 7th birthday with her home-made chocolate train cake!!

I suppose I would describe my style of cooking as experimental with traditions.  Without casting massive stereotypes I think that my Jewish upbringing has influenced me in a way that food is top priority in life… that should be TOP PRIORITY IN LIFE!  If all else is falling apart around me; should work be slow and money be non-existent, should the rain be ceaseless or the snow thick on the ground, through death and destruction, good times and bad, food comes first.  It’s what I think of when I go to bed at night… I plan my next meals whilst eating (something The Viking cannot understand or abide… he comes from a background where food is fuel… something that I find totally alien!) when I wake in the morning and all my social arrangements are planned around food.

I’m even proud to say that food is more important to me than historical monuments… mum often tells (with glee) the story of the trip we took to see Stonehenge when I was about 7 or 8.  I believe we were driving down to Cornwall and had stayed overnight in a hotel close-by so that we could get up early to see these incredible ancient stones.  I was so excited by the fact that the hotel we were staying at had a buffet breakfast that I went to bed early in order to wake in time for food heaven.  In some kind of ghastly nightmare freak of nature, I overslept and totally missed breakfast!  Well… to say that I was upset is an understatement.  I completely ruined the rest of the day for my family, so much so that once we got to Stonehenge I refused to get out of the car saying that ‘I didn’t want to see a pile of old rocks anyway…’ I think in the end they had to find somewhere for me to get breakfast as I was so distraught… even to this day if I find myself surrounded by any monolithic structure an anxiety attack comes on….

I would say that the biggest influence on my style of cooking would have to be my mum.  It’s not that she was one of those old fashioned Jewish mothers who was constantly in the kitchen with an apron around her waist making knaidlachs and kreplach (god forbid and far from it… the last thing my mother is, is old fashioned… in fact I’ll be publishing her amazing recipe for Marmalade Chicken soon and believe me that’s as far from traditional as you get!) it’s just that meal times were important to her and having the family together was and still is a big thing… although it rarely happens anymore. 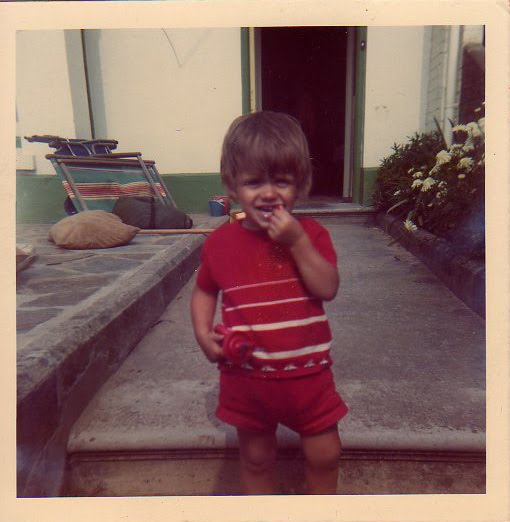 We grew up in the suburbs of London in the 70’s and 80’s and mum truly embraced that way of life, if there was a new style of cooking or a trendy dish to try out, she would try it and we’d eat it.  That, combined with a tradition of Friday night meals with family or friends really sparked my love for food.

Mum came down from Hull in the 60’s and it seems was ready to try all kinds of food as yet unavailable to her up North, food that we all take for granted now but was relatively new then such as Indian and Chinese… her dad (my grandpa) worked in the Fruit and Veg business on the docks in Hull, so they would always have an abundance of fresh fruit and veg and on occasion something exotic such as a banana or avocado would appear!

I can’t really remember if her mum, (my grandma) was also a good cook, (although since originally writing this, mum tells me she did baked incredible cakes…) however I do remember she made the most amazing chicken soup and both my mum and her sister, my aunt, are both excellent cooks, and I guess they must have got it from somewhere…

I remember more from my other grandma, dad’s mum.  I guess we saw them more regularly, for a longer period into my adulthood.  In fact I am lucky enough to have written down some of her most delicious soup recipes and some of her more bizarre salad recipes, which no doubt I will share with you one day.
We spent most Sunday lunches with grandma and grandpa and my cousins throughout our childhood and lunch was usually some kind of vegetable soup followed by roast lamb or beef with amazing roast potatoes… then suddenly one day grandma went on some kind of freakish health trip and started serving poached salmon and new potatoes… Sunday’s were never the same again! 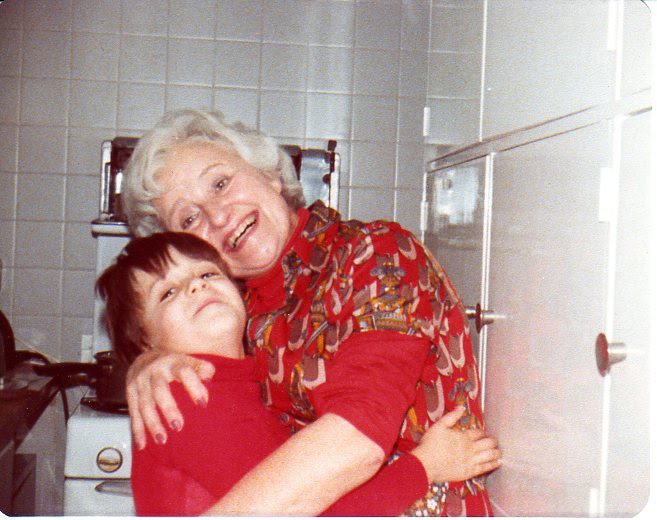 So as you can begin to see, I come from a heritage of cooks and food traditions which have clearly shaped my cooking style… but I think it’s more than just the traditions.  I always loved to cook and experiment in the kitchen… I would even feign sick-days off from school just to mess about in the kitchen.  Mum would often come home after work to find her ‘supposed to be sick son’ having prepared some weird concoctions, usually with the food processor and usually having created an almighty mess!

As I mentioned, we lived in suburban London, very near to Wembley

We arrived and it was a very different set up to the standard ‘flocked wallpaper’ type restaurant.  It was a very basic set-up, nothing fancy and with no-one to greet us with a friendly smile at the door we soon realised that we had to help ourselves to the self-service style food.  Not knowing what we were choosing made the whole experience both exciting and rather worrying!  We sat down with our chosen delights only to find what looked like cooked cockroaches in the rice.  It was shocking to say the least and we really didn’t know quite what to do… bravely my father approached one of the proprietors and, in a way only the British know how, seemed to apologise embarrassingly for finding the, by now, quite numerous insects.  Of course the proprietor was indignant and quite angry, we shuffled our feet for a while and made noises about the lack of cleanliness and how they should be ashamed, until one of the chef’s rushed out of the kitchen with a packet of large dried seed pods which, sure enough, looked like crushed cockroaches but, we were assured , were in fact a spice regularly used in Indian cooking!

Needless to say we ran from the place with our heads hung in shame and my parents fondness for ‘food discovery’  placed well and truly into the ‘keep it to what you know’ category!

Mum and dad would regularly throw dinner parties (it was the 80’s after-all) and these parties would be, I suppose, the biggest influence on me to start cooking.  I loved the way she would plan and build for a dinner with friend
s… traditionally 3 courses, usually starting with a soup and ending with a selection of sweets, such as chocolate and chestnut roulade, strawberry pavlova and the ubiquitous fruit salad.

I would inevitably end up helping mum serve dinner to her guests… carefully carrying each dish to its respective party guest and watching their faces light up with delight as to what was on offer. 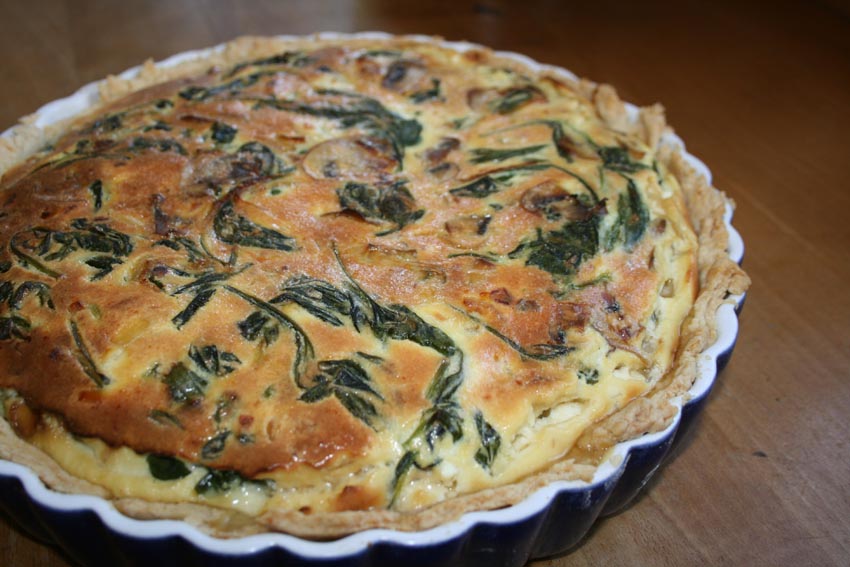 One of mum’s specialities is her fantastic quiches… these would be served, with an expansive selection of other dishes, buffet style, at larger gatherings, either as large pies, sliced into sections, or as mini quiches.  Her original recipe is from the wonderful Robert Carrier – ‘Great dishes of the World’ first published in 1963.  It was called Italian Spinach Pie. An insightful and incredible book. She’s adapted it over the years to suit changing tastes and trends and I too have adapted her recipe.  It’s not one of those ordinary, cheese heavy, acid burning quiches, this is light and creamy, like a souffle in a pastry case!  You can use any combination of vegetable fillings, depending on what’s in season or what you have in stock.

Here’s my adapted recipe for spinach and mushroom quiche.  It’s for a medium flan dish.  I have a large flan case so I use 4 eggs..adapt as you feel appropriate.

First, make your own short-crust pastry… it is so easy and whilst it’s resting in the fridge you can make the rest of the quiche…

Ingredients
For the pastry:
8oz plain flour
4oz softened butter or margarine (or 3 oz of butter and 1oz grated cheese)
pinch of salt
tablespoon of water

to make the pastry simply add the fat to the flour and rub it in until it resembles bread-crumbs, (I will sometimes use 2/3rds butter and 1/3rd grated cheese) then add the a tablespoon of cold water and bring it together with your hands until it forms a ball of dough.  If you want the pastry to be really rich you could also had a beaten egg at the bread-crumb stage and this should be enough moisture to bring the dough together.

place the dough ball in a plastic bag or wrap in clingfilm and place it in the fridge for at least 30mins.

Now, saute the onions and garlic until soft (sometimes I will let the onions really caramelize as they add a wonderful sweetness to the dish) then add the mushrooms and saute the whole lot till it’s all full of flavour and nicely coloured.  Add the spinach to the pan and let it wilt with the lid on, then mix it all up.  Plenty of SandP here. Set aside off the heat.

In a bowl beat the eggs and add the creams and whisk furiously till light and frothy.

Roll out the pastry very very thin.  Line the flan dish with it.  Now, you have 2 options here…either blind bake the pastry using baking beans, or as my mum (and hence me also) has always done, don’t bother… if you roll it thin enough the pastry will cook in the oven with the filling on top anyway and it remains light…

Now, mix the sauted veg with the egg/cream mix and pour into the flan dish and bake in the oven at 180  for about 40mins or until golden and risen on the top.  It shouldn’t be eaten straight away.. best to give it half an hour so that it can set slightly and be eaten just warm…not cold and not hot.

There are so many variants of this quiche… as long as you keep to the egg mix you could do all kinds of fillings.  Some of mum’s favourites are: Leek and Roquefort, Courgette and Cherry Tomato (slice the courgette and griddle it first for flavour,) Sweetcorn and Spring Onion…