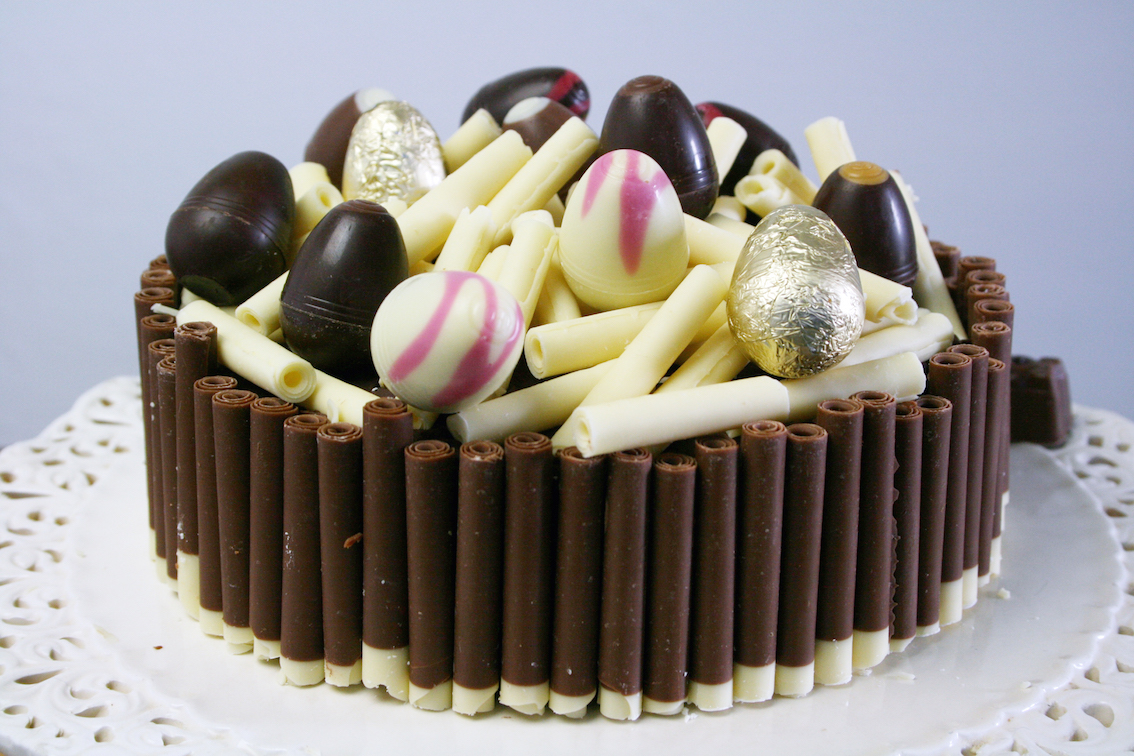 … the wood-burning stove is finally in… just the full four months after it was supposed to be fitted and believe me when I say, it’s not been an easy journey.  As you know, I absolutely love living in Lincolnshire but more often than not the attitude of the workmen is very laizze-faire or to jump European countries for a moment, they have what can only be described as a ‘maniana’ attitude.  There seems to be no hurry to get anything done.  As you can imagine, for a couple of guys who work in an industry where we are always under the tightest time constraints and where our deadlines are not infinite, this attitude is highly frustrating to say the least.  I think i’m a little more relaxed about stuff like this but The Viking gets particularly upset but this is when he brings out the magic… you should see him work.  When I am like a stupid kitten who rolls over in front of a workman and just accepts that ‘the chimney liner doesn’t fit and there’s nothing we can do for two weeks,‘ The Viking is more like a dog with a chew-toy and simply won’t stand for it.  On Friday we had no stove and a tricky situation with bends in the chimney and a plumber who clearly wanted to go home early, so he called me because he knew I was a pushover.  He wasn’t expecting The Viking to call him back and I hate to think what he said but today we have fire… 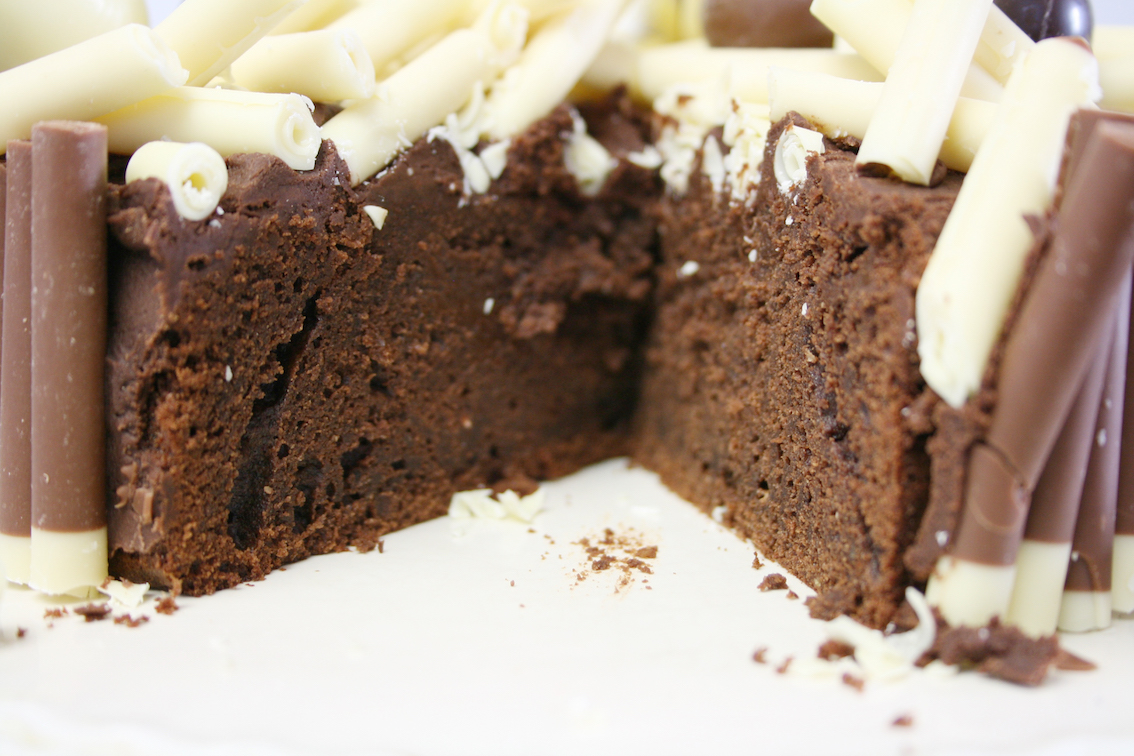 … Hotel Chocolat have a lovely selection of tempting seasonal chocolate treats including the very cute and extremely tasty Caramel Bunnies filled with molten caramel and the very chic Dozen Quail Eggs filled with classic Hotel Chocolat centres such as the divinely tangy Raspberry Supermilk and the richly nutty Peanut Butter Praline… this Easter they have given me a box of each to giveaway to one lucky Belleau Kitchen reader.  All you have to do is fill in the little rafflecopter widget below and these chocolates could be winging their way to you this week! 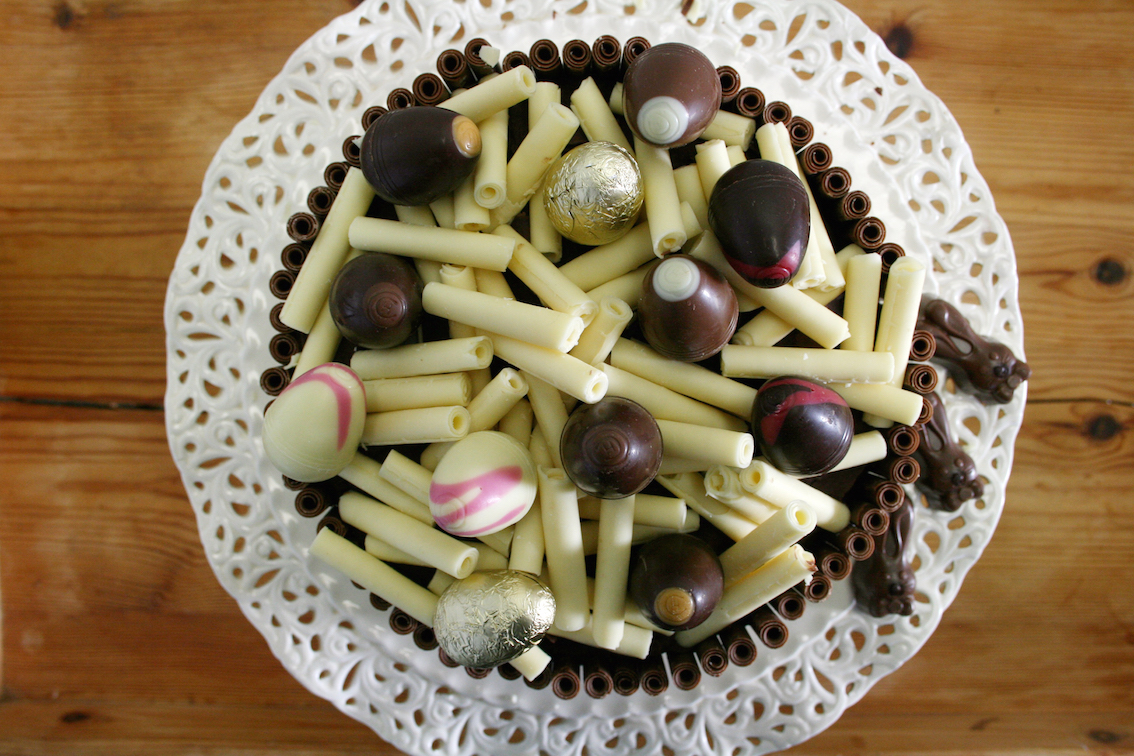 confused religion gluten free chocolate cake
so as many regular Belleau Kitchen readers will know, I grew up in a relaxed but traditional Jewish household… whilst being Jewish was part of my upbringing our family was very much part of the wider non-secular world and so for me, particularly the Jewish thing was more about family and food rather than anything particularly religious. Plus what decent family is going to deny their kids the delights of Christmas and Easter, we’re not monsters!  of course as a food blogger it’s wonderful to be able to draw on a bit of heritage when it comes to cooking and at this time of the year Passover is the big festival.  The passover meal is a very special occasion and it was always celebrated in style by my family.  The food is symbolic of the journey our ancestors took to escape the Pharos with boiled eggs served in saltwater to represent life and the tears of those we’ve lost.  There is also a divine grated apple and cinnamon dish that represents the cement the slaves used to build buildings for the Egyptians. One of the things we’re not allowed eat is any leavened bread or cakes.  This represents the story that our ancestors didn’t have time to allow the bread to rise so symbolically we clear our homes of any product that contains yeast and eat Matzo crackers instead.  It also means that willey Jewish chefs have had to invent all kinds of clever ways to make cakes and breads which are essentially gluten-free…

This cake is a classic, adapted from a Claudia Roden recipe by way of my mum.. but of course i’ve added some fun easter elements which is why the poor thing is a little confused… It’s utterly divine and is more brownie than cake with a wonderfully fudgy and dense centre.  Quite frankly in my opinion this is the best chocolate cake i’ve ever eaten, gluten-free or not so i’d highly recommended any time of the year…

place the chocolate, butter and sugar into a pan and gently melt until combined…once melted pour into a large mixing bowl

in another large bowl, whisk the egg whites until stiff

stir the egg yolks, vanilla essence, baking powder and potato flour into the chocolate mixture and once thoroughly combined fold in the egg whites until fully encorporated

pour the batter into the cake tin and bake for 30-35mins.  leave it to cool completely on a wire rack before icing.  It will crack on the top, this is perfectly natural.

to make the chocolate icing simply combine the dry ingredients in a bowl and then gradually pour on a little water, stirring until you have the desired consistency.. use this to spread around and on top of the cake.  I’ve used some white and dark chocolate cigarillos and topped the cake with a selection of the Hotel Chocolat Quails Eggs 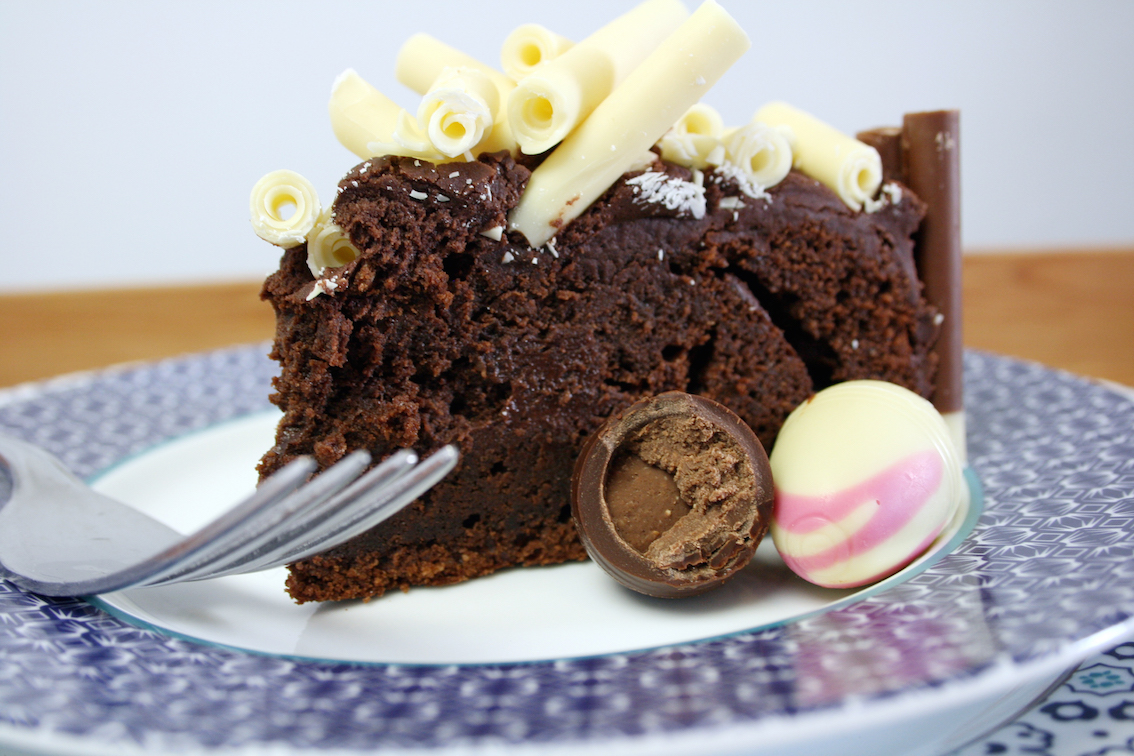