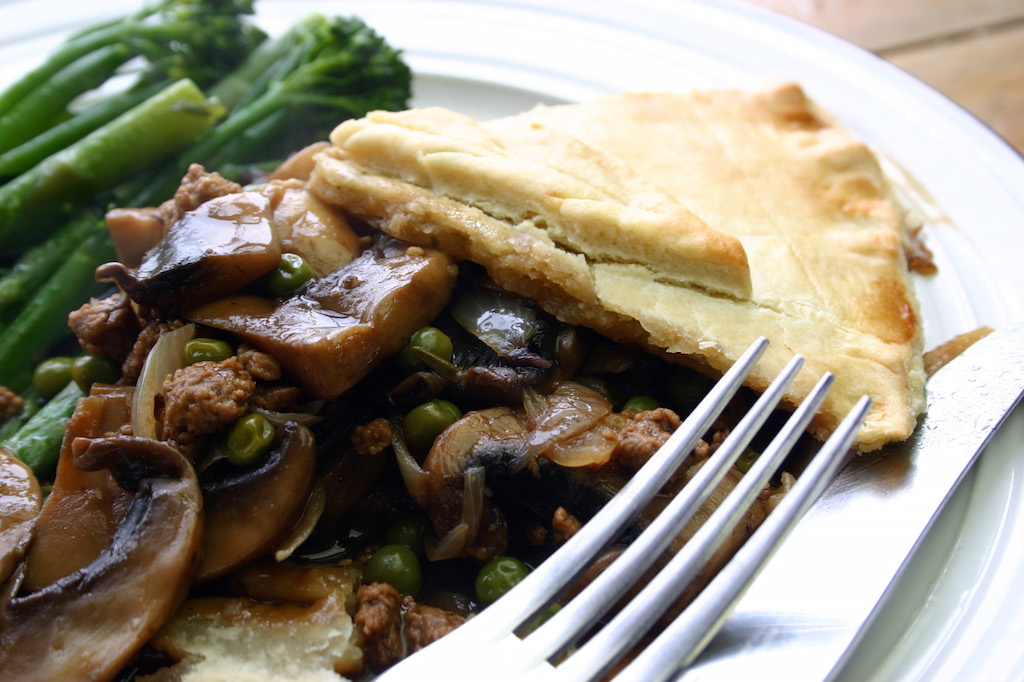 … what people who don’t live in the UK don’t realise is that there’s a really good reason we obsess about the weather… it’s because we never really know what it’s going to be like out there.  There are, quite simply, no guarantees.  Even if the weatherman tells us on a Monday that the rest of the week is going to be a searing heatwave it’s still likely to be raining and cold on Wednesday… and even though we live on a comparatively teeny island the weather only a hundred miles from where i’m sitting now could be completely different to how it is here.  What it means is that when is comes to the summer the only thing we can plan for is rain.  If you’ve planned for rain then you’ll be OK.  It can be tiresome at times and many a marquee has gone up in defiance of rain that never came but it is truly better to be safe than sorry.  What this temperate climate also means is never quite knowing what you fancy to eat.  If the weather was a constant 30 degrees throughout the summer months you’d know you’d be eating salads and barbecues every day but when those blustery rains and cold fronts blow you start thinking about stews when you know you shouldn’t… 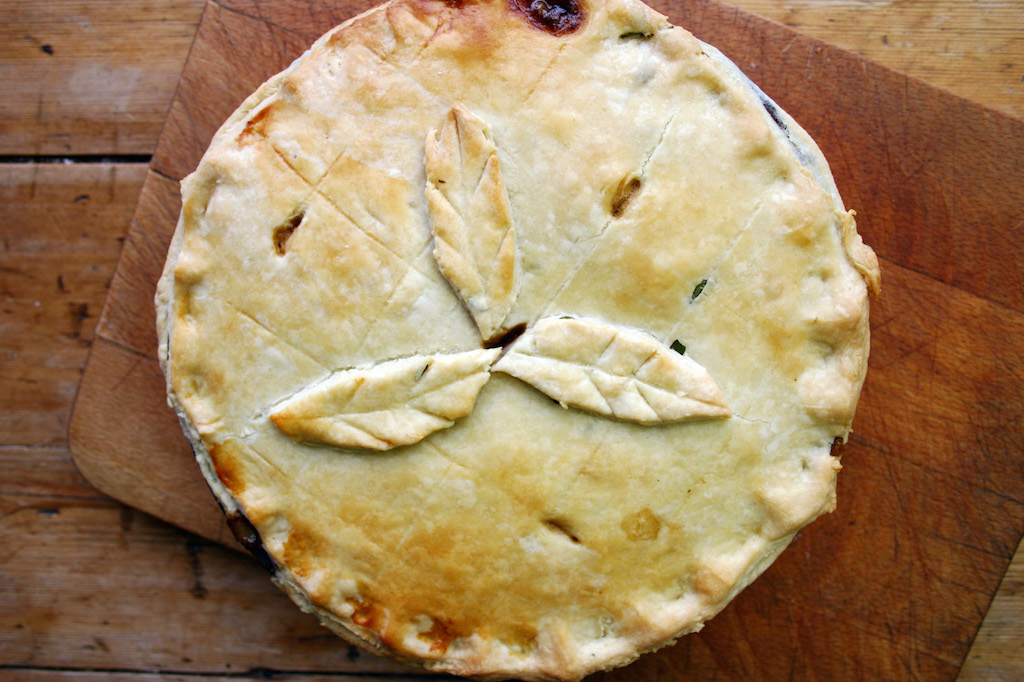 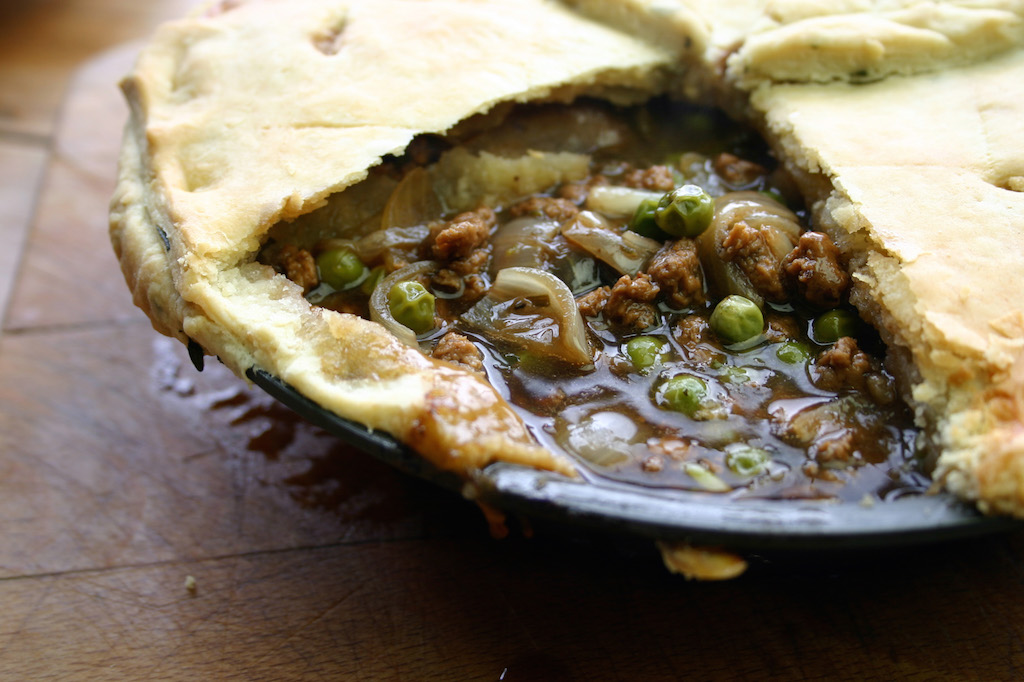 superfast home-made mushroom and pea pie
sometimes on a Sunday I want the traditions of a Sunday roast but without the hassle of having to actually do any roasting… it’s more of a feeling on Sunday that i’m after… bit of gravy perhaps and some nice green veg.  Last Sunday we were out in the wolds for a bit of a drive to take in some scenery and The Viking mentioned pie… well that was it.  I’d started to rub flour and butter together in my mind and we speedily turned the car around and headed for home.  This pie is super-fast for something so rustic and homemade.  You make the filling whilst the pastry is chilling and resting in the fridge so there’s very little down-time. As well as the ale i’m also using some classic Bisto Roasted Onion gravy powder which makes this not only tasty but cuts down a lot of ‘gravy-making’ time… I have no issue with using these kinds of quick fix classics, I simply don’t have the time not to so in total I think it took an hour and a half from arriving home to sitting down to eat which is not bad going for a tasty Sunday lunch…

start with the pastry by placing the the flour and butter in a bowl and using your fingertips, crumble it together until it resembles breadcrumbs, then mix in the fresh herbs, salt and pepper and a dash of cold water.  Using a butter knife, begin to stir it together and when it starts to form a ball get your hand in and bring it all together into a dough.

flatten it out into a disk, wrap it in cling film and pop it into the fridge whilst you make the filling

carefully ladle the filling into the pie dish, brush the pastry rim with milk and lay the pastry on top.  Seal the pastry by pinching it with you thumb and forefinger and then brush the whole lot with milk

bake for 25 mins or until the pastry turns golden 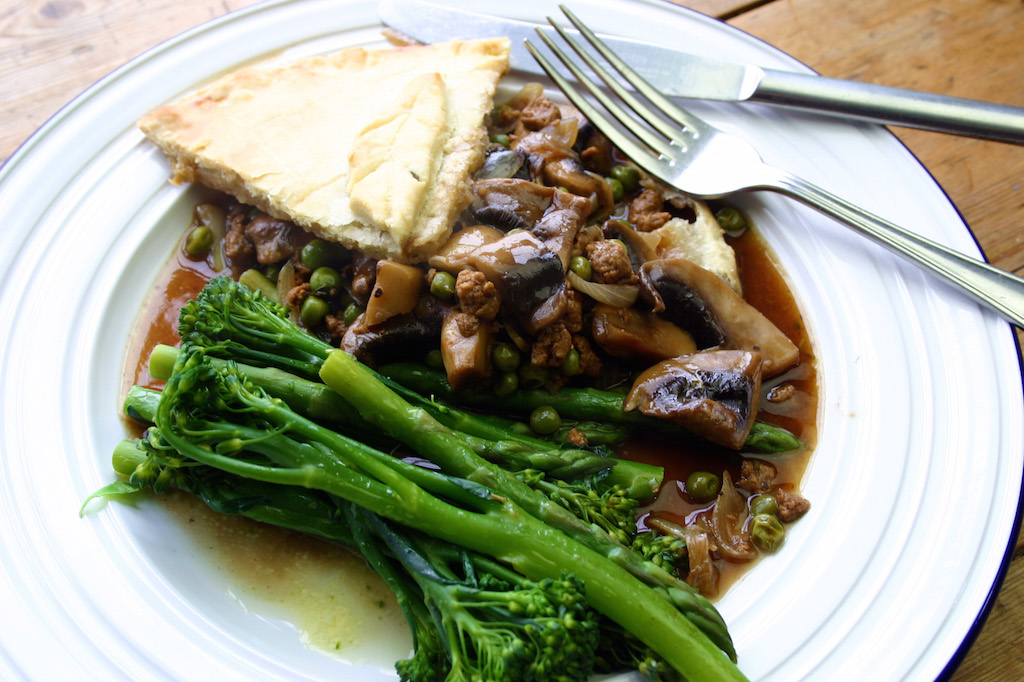