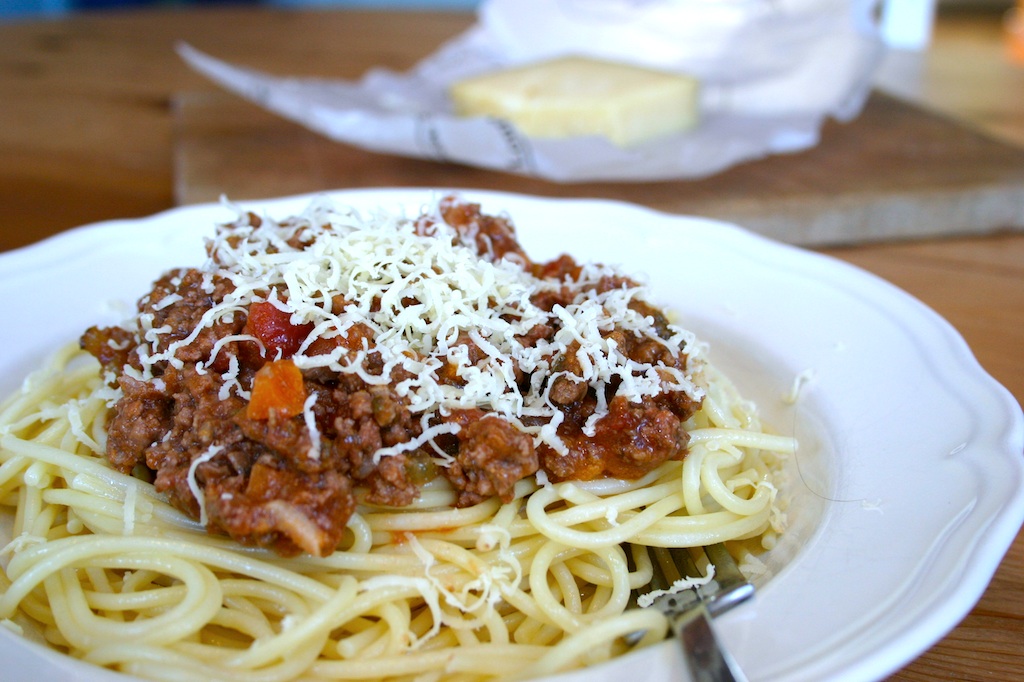 … one of the things that reminds me of my mums kitchen the most is the richly sweet aroma of bolognese sauce bubbling away on the hob… I remember her making it for us regularly in the 80’s when I guess it would have been at the peak of it’s popularity… it was a very traditional recipe and way back in the darkest 1980’s suburban London it was served with dried Parmesan cheese that came in a little cardboard shaker tube… i’m sure any of my readers over the age of 30 will remember the time when italian cheese came wrapped in cardboard.  I know Nigel Slater reminisces eloquently about the sweet, sickly smelling stuff in his excellent book Toast… well in the Franks household, we loved the stuff… whichever cheese you use I think that although it’s not one of the bolognese ingredients it is most definitely 100% part of the finished dish… much like a risotto is not quite complete without that hit of salty cheesiness before serving… 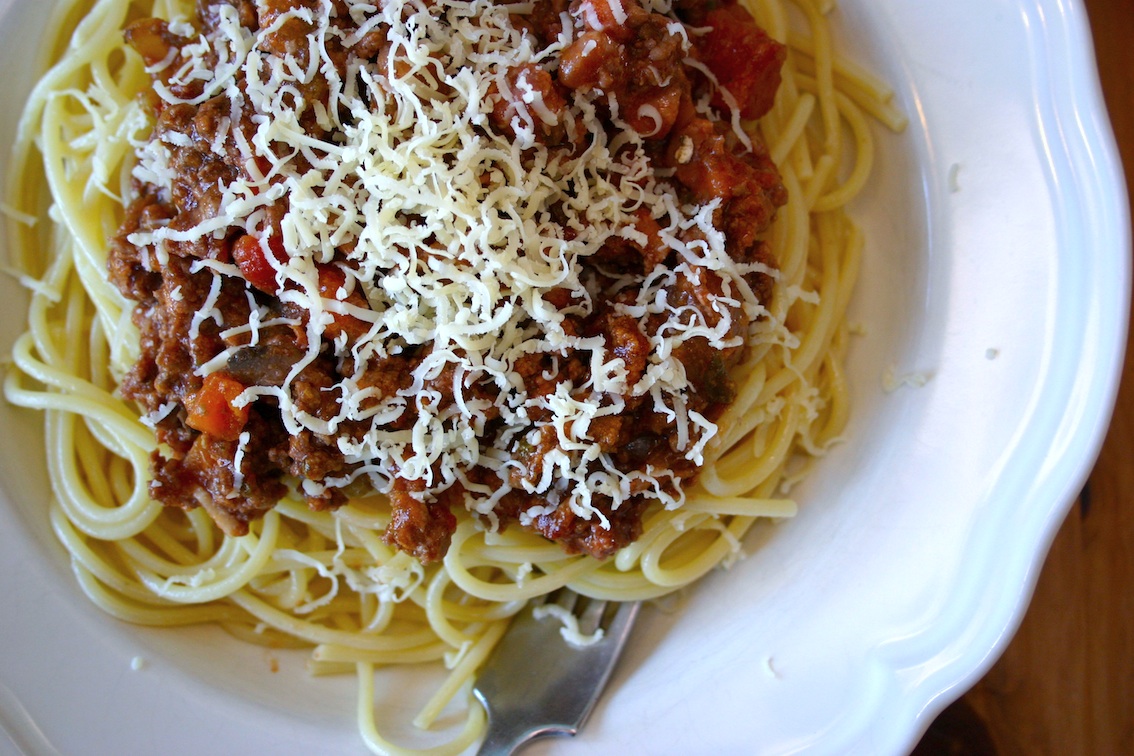 spaghetti bolognese two ways
for the meat version i’m using some truly incredible steak mince, which was part of the starter pack recently sent to me by the brilliant people at Westin Gourmet,  and for the veggie version i’m using what I think is the best alternative for this classic dish, Quorn mince… there are one or two tricks along the way including using one of my favourite new finds – Lincolnshire Relish… it’s brand new to the market and is a nice veggie alternative to Worcestershire Sauce… the ultimate trick with both versions is to cook them in the morning or better yet, the night before and then leave them before eating for at least 6 hours…  I start with a classic triumvirate of onion, carrots and celery…

600g or 2 tins chopped tomatoes
1/2 pint good quality veg stock
1/4 pint red wine
– so you need to start with a large pan or casserole dish, add a nob of butter and some olive oil and then gently saute the onions for 5 mins, then add the celery and carrots and saute for another 5 mins before adding the garlic, dried oregano and rosemary… sizzle gently for another 5 mins… remove from the pan and set aside
– melt a little more butter and oil in the pan and saute the mushrooms with a generous amount of pepper and a little salt until almost dissolving… this is the stage where one becomes two…
– now, if you’re making 2 versions, this is where you’ll need your second large pan as you halve the cooked ingredients… if you’re just making one version then simply continue with the ingredients and method as outlined below…
veggie version
add the quorn mince and stir it into the vegetables and let it sizzle a minute or two before adding the tomatoes, relish, and liquid – a quick stir and then let it bubble away on a very low heat for at least an hour.
meat version
add the lardons and chicken livers, whack the heat up and let them melt together, then add the meat and mix it all around… allow it to brown gently and entirely before adding the tomatoes and liquid, then let it bubble away on a very low heat for at least an hour.
re-heat gently after leaving for at least 6 hours and serve both version with your favourite pasta, spaghetti being the traditional choice and plenty of strong hard cheese…
eat and of course, enjoy!