… as part of my on-going series of Lincolnshire Food Heroes for Lincolnshire Life Magazine, here’s my most recent article about the wonderful folk at Chapman’s Fishcakes… 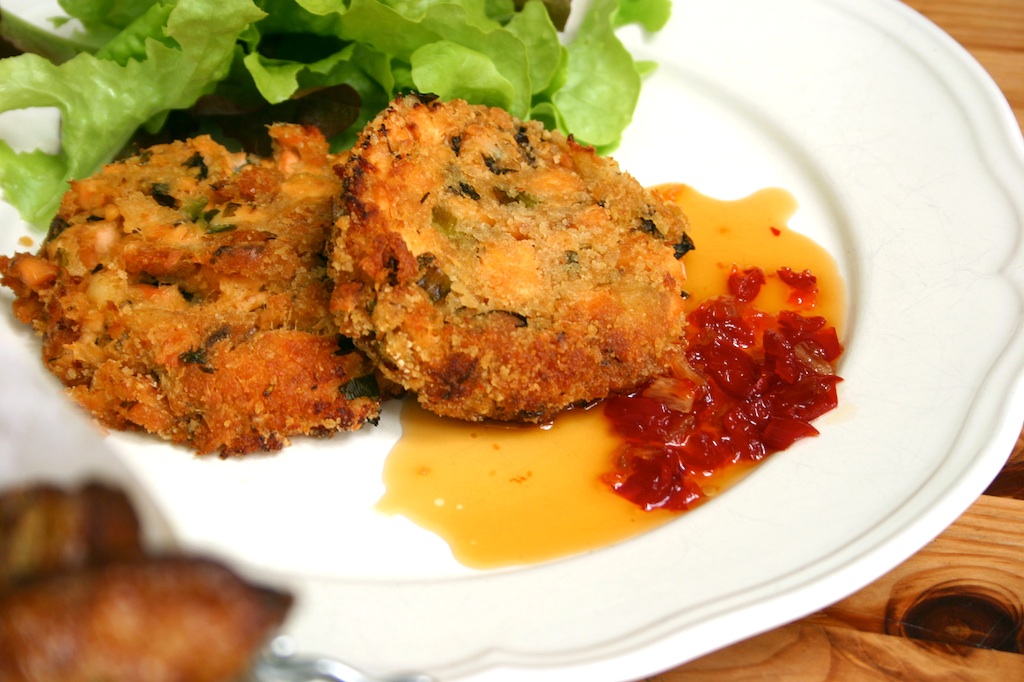 … here’s a glimpse of the cooked thai fishcakes and some yummy home-made sweet chilli sauce that i’ll be featuring in a recipe in my next post…
Kevin and Paul Chapman – Chapman’s Fishcakes
Back in 1976 when Delia Smith gave us a recipe for Salmon Fishcakes in her now much lauded book Frugal Food, she could not have possibly known how this humble patty of potatoes, herbs and fish would become such a popular and enduring dish. Her recipe, which used tinned salmon, is now a family favourite in the homes of many of us up and down the country but perhaps over-taking them in the popularity stakes is another humble family recipe for fishcakes this time from Mavis Chapman and it was Mavis’ recipe that inspired two of her boys Kevin and Paul to launch the Chapman’s Fishcake company 5 years ago and it is with Mavis’s recipe that their company has grown, and continues to grow to this day. 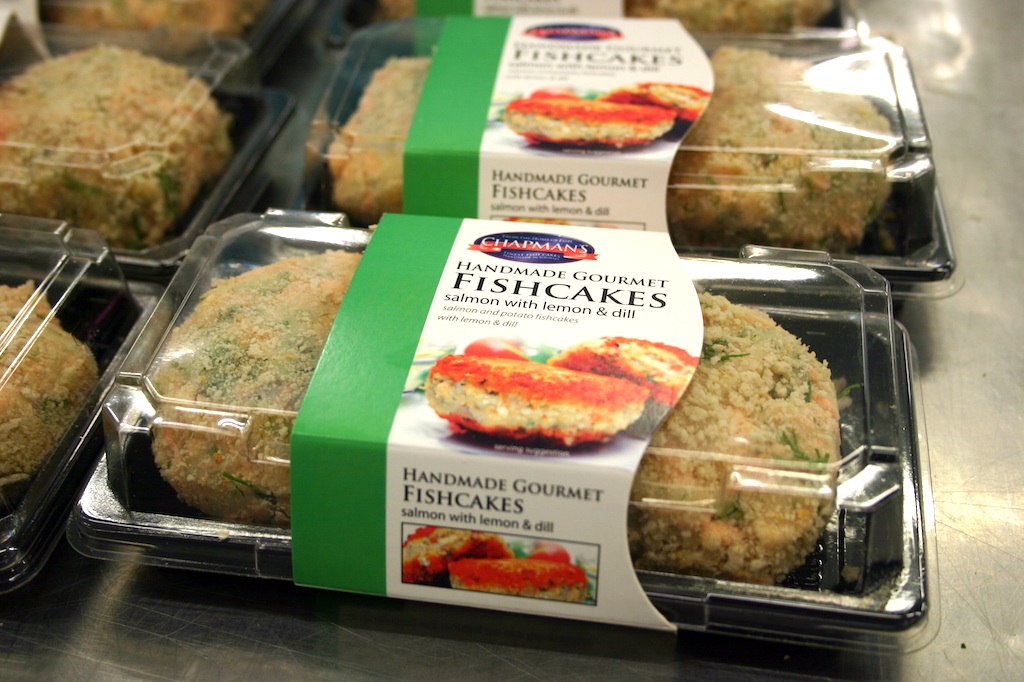 the finished and packed fishcakes
Of course the Chapman’s Fishcakes use only the finest fresh fish, like their mothers, who would use the fish her husband Terry would bring back from his work on the docks in Grimsby and it was in Grimsby that I met Kevin and Paul in their new premises.
The Chapmans are in great company too because whilst Grimsby may have changed quite considerably over the years, the town was once the largest fishing port in the world, the legacy and industry remains with many companies still working within the fish processing arena.  Grimsby is also still home to the largest fish market in the world and many of the big names in the fish-to-consumer market and it’s not only fish but many large food companies are based here bringing a new food industry to the town. 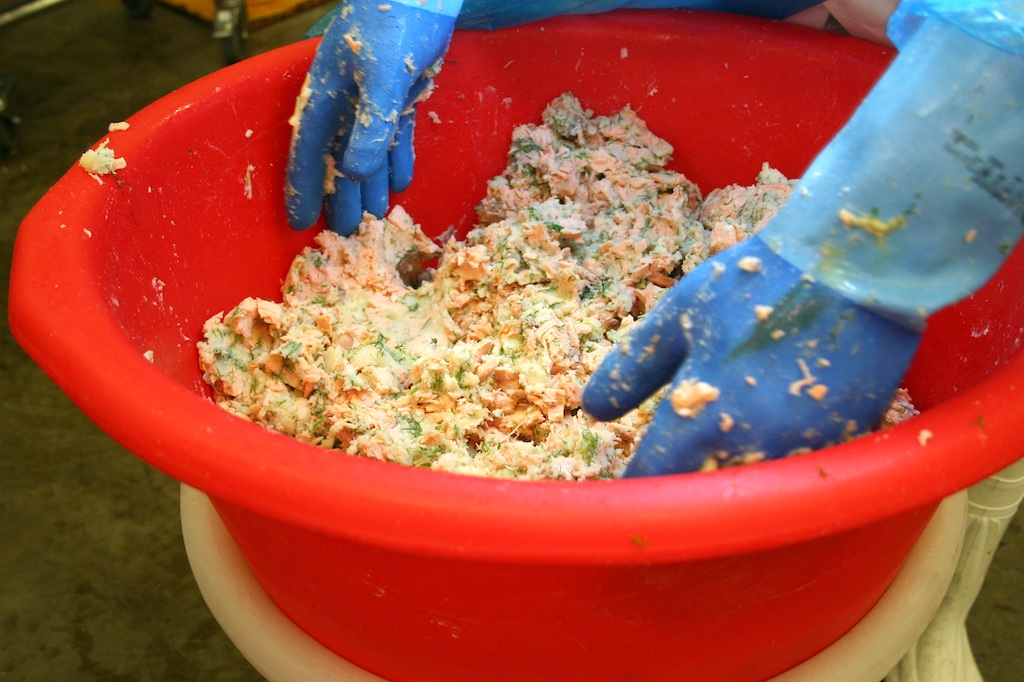 mixed by hand, each mix produces 60 cakes
Kevin and Paul grew up surrounded by the world of fish, they both left school to go and work directly within their father’s company T Chapman and Sons and t was here that they learnt their trade, steaming crab that had been transported from Cornwall! It was the decline in the fishing industry since his father’s day that prompted Kevin to re-evaluate what the family company were doing and an obvious natural progression from fish-packing to fishcake making.  The Classic Fish and Parsley Fishcake was born and even won the prestigious Great Taste Award in its first year!  The Chapman boys have stuck closely to their mother’s recipe which means quality is of utmost priority and in true artisan style the fishcakes are made by hand in the factory using the finest local ingredients. 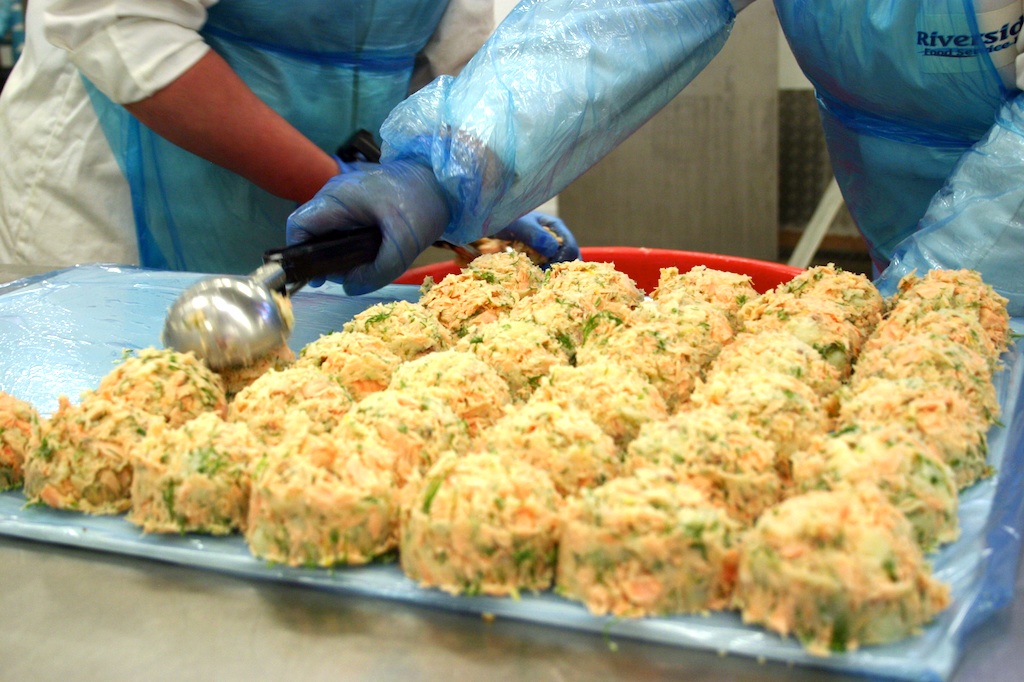 scooped out ready for hand-rolling
Maris Piper potatoes are sourced by local growers, which are first riddled and then steamed, after which they are hand-mashed and mixed with fresh herbs.  The fish is added last and carefully folded-in, again by hand, to ensure that large flakes of fish remain whole in the finished product.  The cakes are formed into patties are finally covered in a light breadcrumb before being packed ready to sell. The classic recipe also has a secret ingredient that is only known to the Chapman boys! The Classic Fish and Parsley fishcake uses only fillets of white fish such as haddock, coley or cod  which will change depending on what is best at the market on any given week, again much like whatever fish their father brought home, and  this fishcake has been popular from the start of the business when the boys used to sell them at farmers markets in Grimsby and the surrounding towns.  They now supply over 200 farm-shops covering the entire country and plan to expand into as many of the 7000 UK farm-shops and deli’s that will have them.  They have already taken on board a development chef who has increased their range to include a haddock, leek and cheddar cheese fishcake, a salmon with lemon and dill fishcake, a thai style salmon fishcake and my current favourite the smoked haddock and smoked bacon fishcake – another Great Taste Gold Award winner! 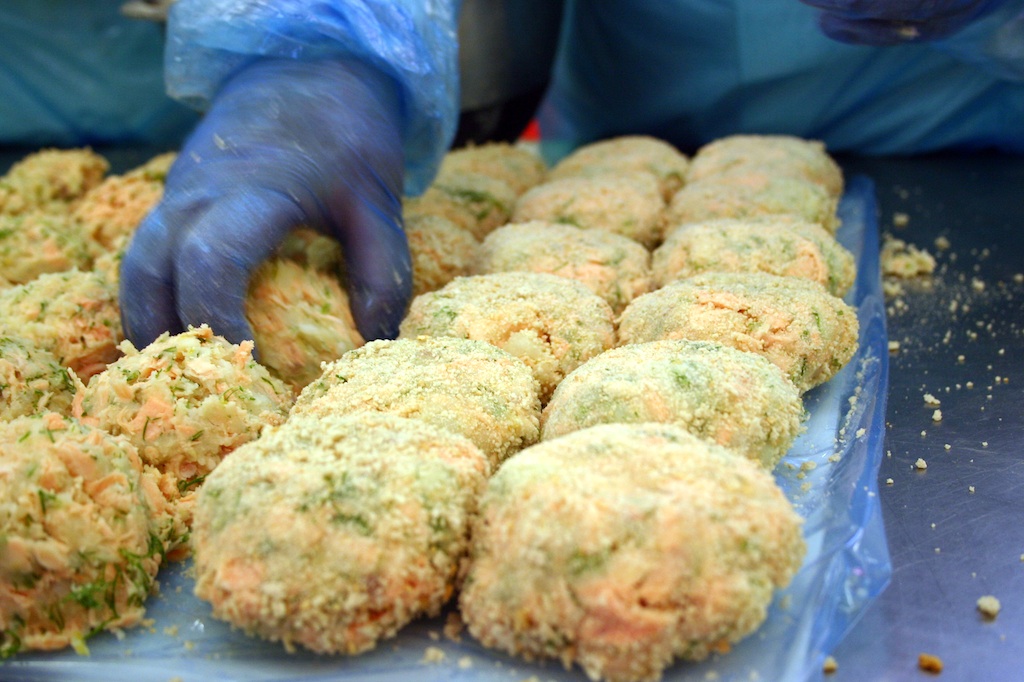 hand-rolled and then covered in breadcrumbs
The company now also produce a rather marvellous range of Fish Wellington’s as well as a Luxury Fish Pie and very tempting Haddock Bakes, all lovingly hand-made in the factory.
Maybe if I try enough of them I might be able to work out that secret ingredient know only to the Chapman’s and of course their late mother who sadly passed away before the boys founded their company although I am sure she would have been very proud of the finished product and her inspiring recipe that has become a legacy for us all to share… thank you Mavis!
All 13 products in the Chapman’s Fishcake range as well as a list of local stockists can be found on their website www.chapmansfishcakes.co.uk 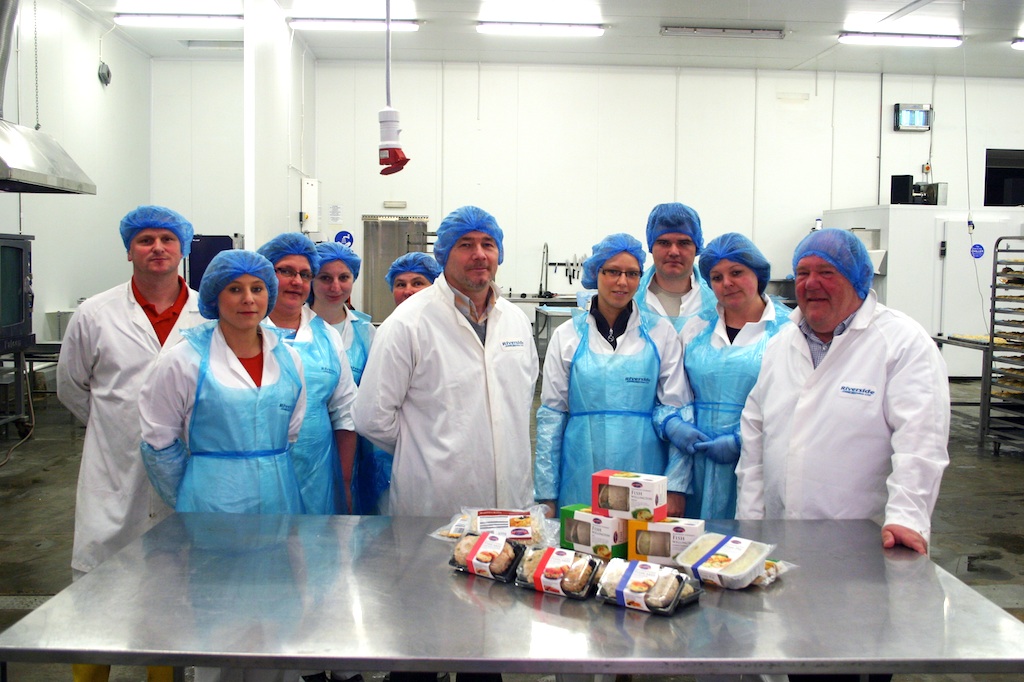 Paul and Kevin with the team