… below is the first article I’ve written for Good Taste Magazine, a food magazine produced by the good people at Visit Lincolnshire… the magazine only comes out twice a year so I feel very fortunate to be able to contribute this season and I hope my relationship continues… 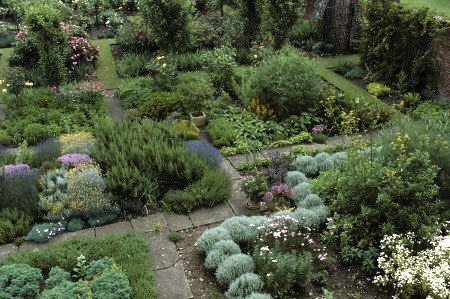 the Gunby herb garden
In the herb garden
Tucked away in the lower Eastern corner of the Lincolnshire Wolds is a stunning William and Mary house with an 8 acre garden and in a small corner of this garden is an area dedicated to growing herbs.
The house in question is the National Trust property, Gunby Hall and the kitchen garden has been growing herbs since the Hall was built in the 1700’s by Sir William Massingberd.  The garden is now expertly tended over by the head gardener Clive Ironmonger and funnily enough his first job when he started back in 1992 was working in the herb garden!
The herb garden itself is located directly behind the stable block, which was built in 1735, and was first planted on its current site in the 1960’s when the Wrisdale family, under the auspices of Betty Wrisdale, beautifully rescued and revived the full 8 acres of over-grown gardens.  It features a central, stone-trough planter and flagstone and grass paths that demark the beds.   There is a restful two-seater bench on a cobbled square behind the stables overlooking the Herb Garden with views across the Apple pergola to the matching path and layout of the 1970’s Rose garden.
The planting forms a series of bands and blocks to give a partly formal feel whilst the centre area is an eclectic mix of plants including some that are tender and get bedded out each year such as the collection of Scented Pelargonium and the pots of Lemon Verbena. Towards the 4 corners of the Herb garden each bed has taller planting that lifts the height above the smaller herbaceous herbs.  These corner beds feature Myrtle, Bay, Cardoon and Globe Artichoke. 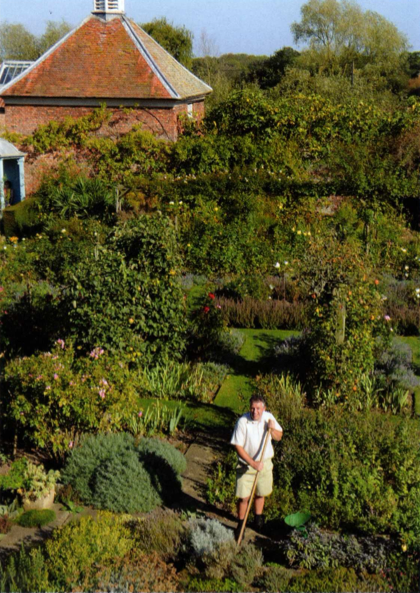 Clive comments that ‘Many herbaceous Herbs are very strong growers and often have to be annually split to keep them in check and at the same time young and fresh’ and as a tip he suggests that ‘the shrubby ones such as Sage and Rosemary can be struck from cuttings and replaced as required rather than ending up with an old woody plant.’  He also makes sure that the Mints are kept to one square, surrounded by a path, in an attempt to counter their keen spreading habit. The whole herb garden receives regular hoeing, dead heading and trimming plus an annual fork through, splitting and replacing plants as required.  Clive comments that ‘Herbaceous Herbs, when in full use other than ornamental, require regular cutting back to rejuvenate back to good new leaf.’
Back in Sir Williams day the herb garden would have been used for medicinal purposes as well as culinary and although there is no doubt that herbs were grown during the Hall’s 300 year history it is not known exactly where the original herb garden would have been located, however the Hall does have a delightful collection of historic medicinal and culinary recipes, using herbs from the garden, which can be viewed upon request. Interestingly the biggest medicinal herb growing is now done in the formal front garden; The English Yew hedge, trimmings of which go to make Taxotere the chemotherapy drug.
It is stated in some of the older guide books that over 80 varieties of herbs are grown at Gunby and whilst the official definition of a herb includes a plant with leaves, seeds, or flowers used for flavoring, food, medicine, or perfume, Clive Ironmonger has never done an official count himself. Although on a specific a Lincolnshire angle, there is a small square of Mercury Markery, Lincolnshire Spinach and Good King Henry. 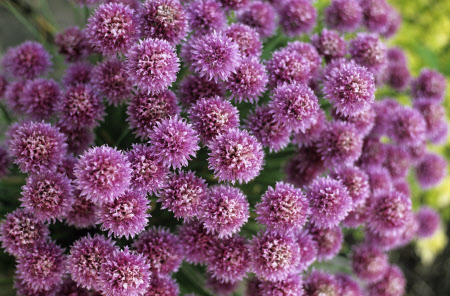 a head of flowering chives at Gunby: photograph: ©NTPL/Andrea Jones
It’s not always been a success however. Welsh Onions and Chives used to be planted but through disease build up, perhaps as
a result of growing in one location for a long time, they now don’t appear in the Herb garden.  There are also other herbs that are now grown in the larger Walled Kitchen Garden such as Parsley and Culinary Sage which do better in this warmer sunnier South facing border, as well as the very large leafed variety Salvia Maxima which is planted at each end of the border.  Basil and in some years, Lemon Grass is grown in the Tomato greenhouse.
Fortunately for everyone Gunby often has some of the shrubby herbs for sale such as the Sages, Rosemaries, Lavenders and Cotton Lavenders but the selection changes through the season.
Gunby Hall and Gardens are open throughout the year, prices and opening times can be found on their website www.gunbyhall.org.uk