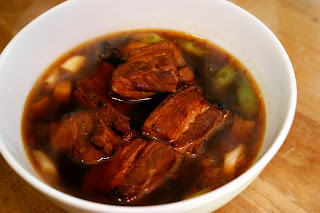 … this month dear Beatrice chose for me The River Cottage Meat Book by HFW… it’s a giant tome of a book, mostly full of graphic photography showing you how to joint a camels heart… so I opened it with some trepidation worried i’d end up skinning a guinea pig or something.

I actually opened the page describing, in graphic detail, all the different pieces of offal, so I had to pick again and got this amazing, aromatic dish… so exciting… I had most of the ingredients anyway, so it was off to the butcher I went for my pork belly. 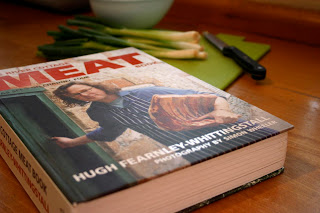 Hugh describes this dish as a fine example of the great versatility of pork belly and the slow-cooking technique, this time using aromatic oriental flavourings… and the house most definitely smells good…

– chop the pork belly into chunks and chuck them into a pan of boiling water, let them simmer for 5 mins or so whilst you skim off the scum

– drain the pork belly, clean the pan and then return the belly to the pan and cover in the stock, 5 of the spring onions which you’ve chopped in half, then the rest of the ingredients.

– bring to a boil then turn down the heat, cover and simmer gently for 2 and a half hours.

– you may have to turn the pork occasionally but you’ll know when it’s tender.

– remove the pork from the stock with a slotted spoon and set aside (at this stage I actually put it under the grill for a minute or two to crisp up, which it did gloriously and very quickly.)

– skim the stock if it needs it then turn the liquid up to a vigorous boil to reduce.  It should be lightly syrupy and intense in flavour but not reduced too much as you don’t want the soy sauce to become too salty.

– slice the remaining spring onion, add it to the pan along with the pork to heat through.

remember you have until the end of the month to take part… come on now, be brave… pick book number 18 and get cooking!