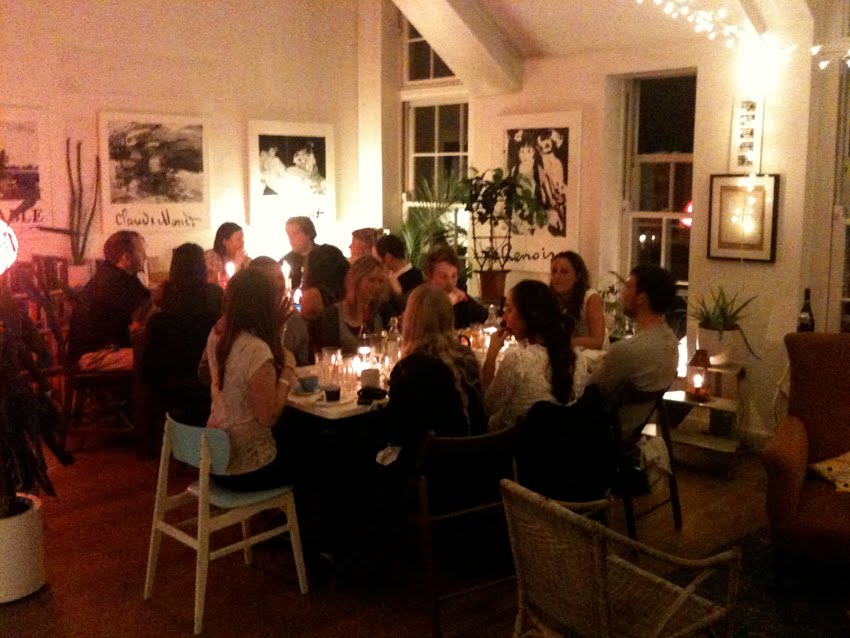 Last night I went alone to my first supperclub….

…I chose the best, or perhaps it would be better to say that it chose me… James Ramsden is infamous for not only being a VERY young and VERY talented chef, exhaulted blogger and all-round nice guy but also for his ‘Secret Larder’ supperclubs which are notorious for serving wonderful culinary delights and having a 3 month waiting list!

… from that moment I was flung into a frenzy of delayed tube trains and taxi cabs, walking into a room full of strangers not knowing what to expect and feeling very nervous… meeting said strangers at high-speed and then dining with the loveliest bunch of people… it was a wonderful experience and I feel very privileged!

after a most welcome mint julep handed to me by James’s delightful sister Mary I was introduced to the crowd for a little light banter before we sat down for food.  The menu had a Creole flavour to it… James sub-titled the evening ‘New Orleans night’ and we started with a small bowl of prawn gumbo which was a light but flavour-packed intro to the tastebuds, swiftly followed by oyster po’boys, something I have never eaten before but is a deep-fried oyster in a light batter, served on a gem lettuce leaf on-top of a chunk of warm French bread.  A bizarre texture, like a velvet slipper in a crunchy overcoat, but delicious nonetheless.

Our main course was short ribs served with spicy potato wedges and a red onion coleslaw… damn fine.  The rib had been slow baked (I assume) and it was moist but totally melting off the bone… living with The Big V I rarely treat myself to this kind of meat indulgence so I was in hog heaven.  Our final course was a dangerous bread pudding with beer and chocolate sauce... one of those puds that you know you’re too full to eat but it somehow goes down anyway?  The whole meal was finished off with a Tennessee Coffee… Bourbon, coffee and cream which packed a punch that sent a few people home not long after… it was un-drinkable… yet somehow got drunk!

It was so wonderful to see James and his gang of mini-slaves working hard in the kitchen and delivering such amazing results from his own home… (fabulous range cooker… very envious) who needs restaurants?… and we were also surrounded by brilliant photography of jazz musicians, specially hung for the occasion.  The photographer, Edu Hawkins, who was there at the supperclub, had given his images to James for the night and it was excellent to be surrounded by such incredible art.

So, that’s it… totally hooked on the whole supperclub idea now… think i’ll start my own local version.

a little note re the lack of photos… in my rush to leave the house last night and the fact that I didn’t know the etiquette behind these things I didn’t take my own camera.  I borrowed one from the very sweet Charlie who has promised to send me them as soon as she can… come on Charlie, pull yer finger out!…