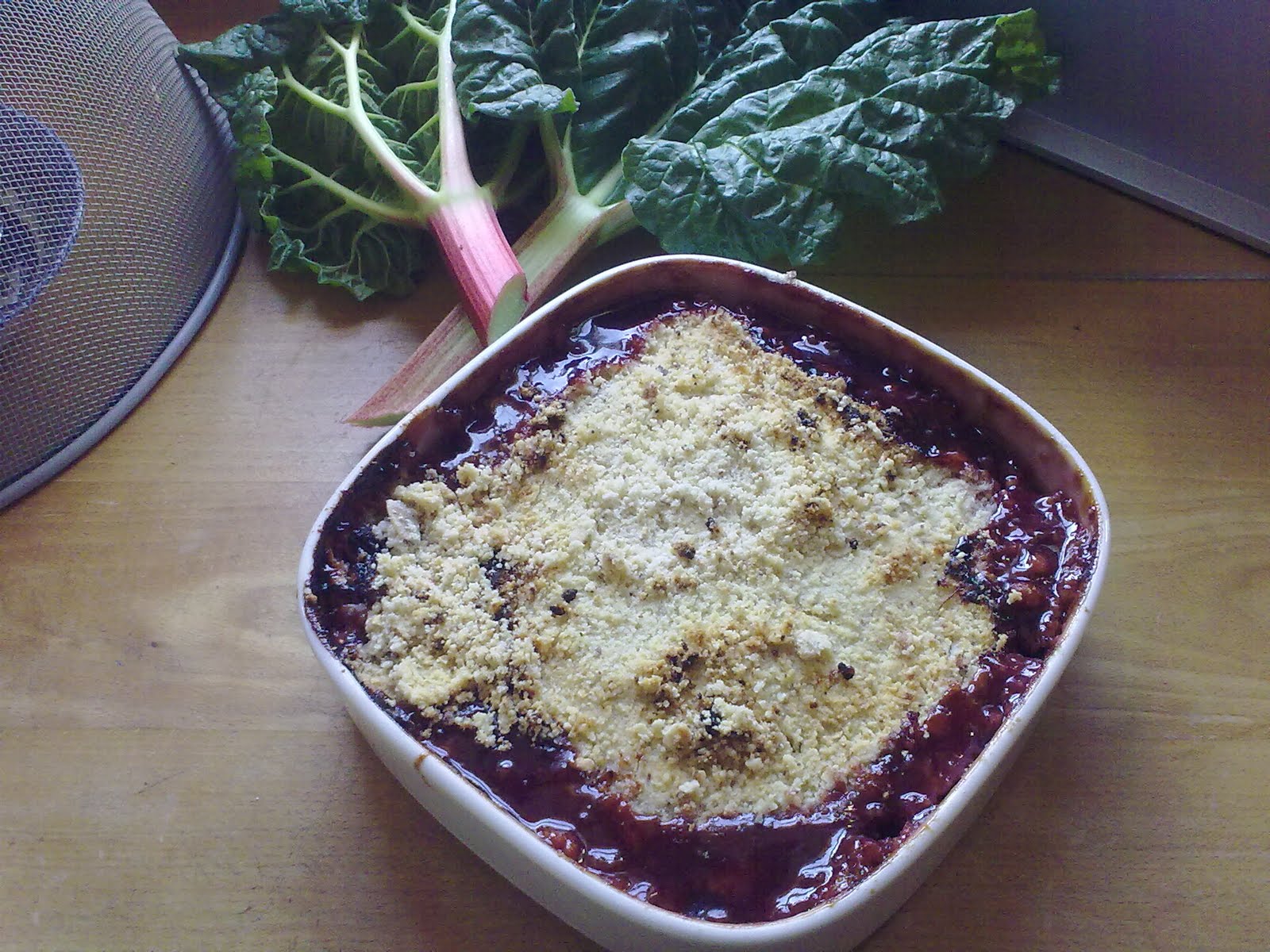 totally the most glorious day of the year so far… don’t know if it’s to do with the lack of air traffic but the sky is blue blue blue!

I’m working outside today, preparing a massive presentation for some important new (hopefully) clients on Monday.  The Viking is gardening like a madman and Holly Golightly is shadow bathing, slowly following the shadows around the garden… she looks up occasionally to make sure we haven’t forgotten it may be time for her dinner… and I suddenly had the urge to cook (not that I need an excuse of course.)

our lovely neighbour Tracey has an abundance of rhubarb, so i’m going to try two recipes, one traditional and one slightly off to the left…

The traditional is a crumble. (recipe below)  I love the really tart, sharpness of the rhubarb combined with the sticky sweetness of the jam and sugar.  I like to eat mine cold with cream but I know most people like it hot with custard. (common eating culture can’t be helped here…I even had a discussion with Russell last week about how common he thought tiramasu is… something about it being on every menu in every restaurant and only common people order it thinking they’re being exotic!)

here’s the recipe for the crumble:


under the crumble:
4 stick of lovely Tracey’s rhubarb (just pop round… she’ll happily let you pick some…)
3 tablspoons of sugar
3 tablespoons of homemade plum jam
1 table spoon of honey

So easy to make cos I don’t pre cook the rhubarb…what’s the point?… you just end up with stewed fruit and I like it when the rhubarb still has some bite and holds its shape.

slice the rhubarb into chunks place it in a large bowl and add the sugar, jam and honey and then mix it all up. (you could add any combination of jams or fruit (raspberries are an excellent bedfellow with rhubarb)

place the mixture into your crumble dish.

now rub the butter into the flour… but not too much, leave it a bit lumpy and then add the sugar and nuts.

spoon the crumble onto the rhubarb and press down firmly so the whole thing is nice and packed in tight.

and of course, enjoy!