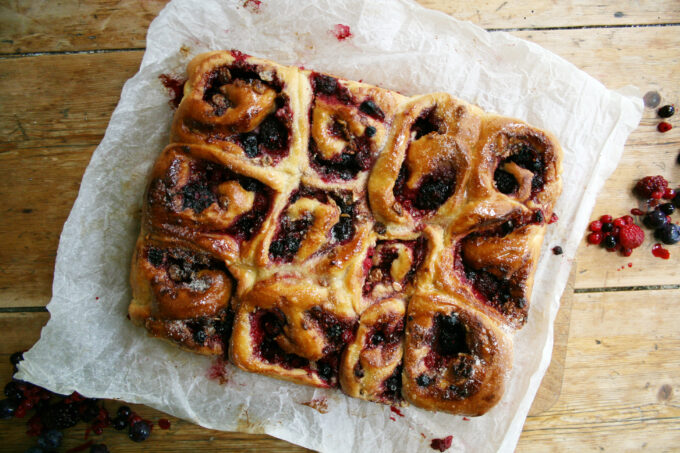 I had some frozen berries tucked away at the back of the freezer that needed eating and so these cute summer berry swirl breakfast buns were born. I’m not sure about you but we made a lot of rather odd grocery shop choices during lockdown.  I think the fear of the unknown became so strong at certain points that we sort of purchased in the most unusual way. I would never normally buy frozen berries.  Even though they’re actually great for all kinds of things from jam to smoothies, they’re still not on my list of ‘must-haves’ in case of global collapse. 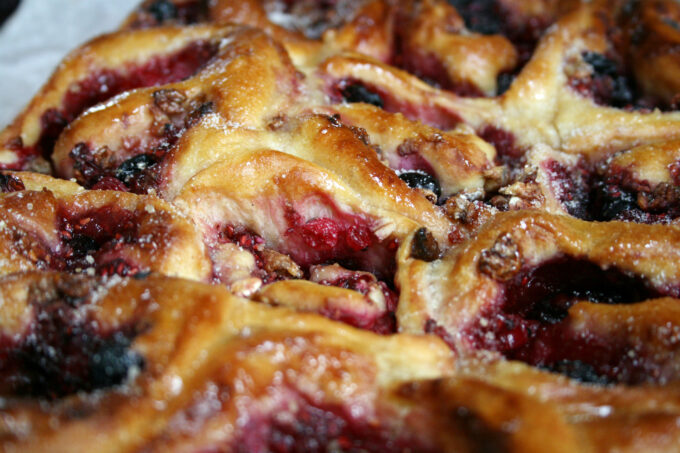 I’m trying really hard to avoid sweet treats at the moment but obviously failing miserably.  These swirl buns are my excuse for something that sits in that ‘sweet / savoury’ category.  Clearly they’re totally sweet but they have that special jam on toast breakfast vibe about them which I think falls into a more savoury category.

Not that we need an excuse to make or eat anything, it’s just nice to be able to identify one (amongst many) times of the day that these can be legitimately eaten.

start with the dough… put the flour, caster sugar, salt and yeast into a large bowl and set aside. Put the milk, butter, lemon zest and vanilla paste into a small saucepan and cook over a low-medium heat until all the butter has melted. Set aside until just lukewarm.

make a well in the middle of the flour mixture, then pour in the milk mixture and add the egg. Mix with your hands to form a rough, soft dough. Tip out onto a lightly floured work surface and knead for about 10-15 minutes until smooth and elastic. (I did this in my stand mixer, using the dough hook on low speed for 10 minutes.) then put the dough in a lightly greased bowl and cover with cling film. Leave it to rise for about 1-1½ hours or until it has doubled in size.

once it’s risen, tip out the dough onto a lightly floured work surface and use a rolling pin to roll into a 40cm x 50cm rectangle. Using a spoon or spatula, spread the jam in an even layer across the entire surface of the dough, then sprinkle the mixed berries and muesli over the top. Roll up the dough into a cylinder along the long edge, keeping the spiral tight. Using a sharp knife, cut into 12 even slices.

grease and line a baking tin roughly 20cm x 3cm and arrange the buns snugly in the base. Cover the tin with cling film, set aside and allow the buns to prove for 45-60 minutes until risen and puffy. While the buns are proving, heat the oven to 180°C Once proved, bake the buns for 25-30 minutes or until golden brown. While the buns are baking, prepare the glaze: put the milk and caster sugar in a small pan, then bring to the boil over a low heat. Remove and allow to cool.

Check out some other sweet bun recipe ideas here on my blog. 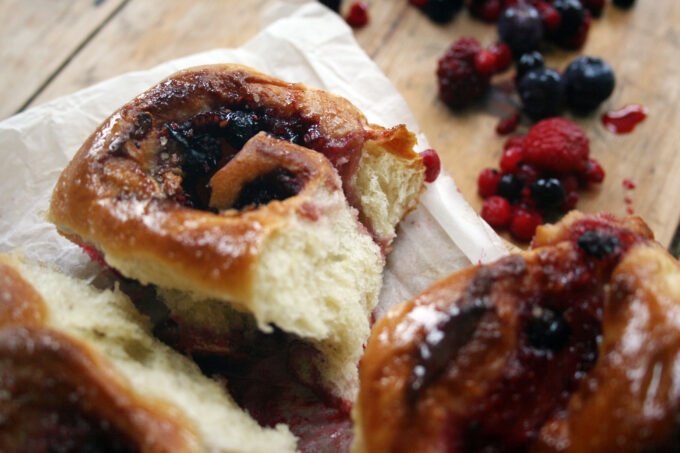