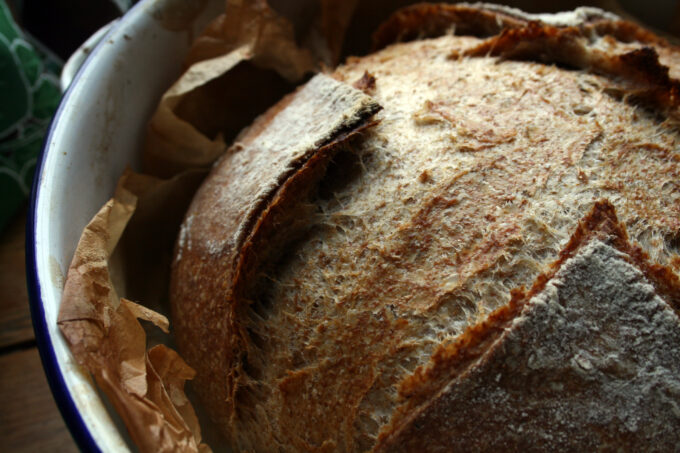 Now there’s a recipe title for you!  Non-sourdough, low-knead ‘sourdough’ bread.  What? Well let’s break it down shall we? This loaf is basically a cheats sourdough.  It has all the looks and attitude of a sourdough loaf but it’s not made with a sourdough starter. It also doesn’t take quite as long as a regular sourdough to make.

OK, so it doesn’t give you that classic sourdough, slightly sour taste or that glorious wide-crumbed texture but it has a stunning flavour, is gloriously light and fluffy and has that perfect crispy crust. I’ve made it a number of times and have requests for the full recipe and method so I’m going to lay it out as a step-by step here for once and all so it’s finally down.  First a few ground rules; 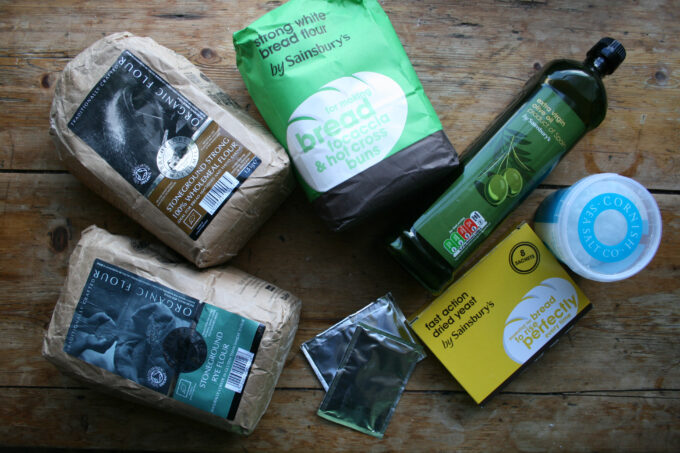 All flours act in different ways, that’s why 2 loaves are hardly ever the same.  I’m using 3 flours for flavour and texture.  The strong white bread flour is a classic and makes up for the bulk of the loaf. The rye adds to the ‘sourdough’ flavour and the wholemeal gives it the structure.  However, both rye and wholemeal flours are thirsty and absorb liquid at different rates.

Without getting mathematical, you may find that my suggested 430ml of liquid doesn’t do the same to your loaf as it does to mine and you just have to work with it until you’re happy.  It is quite a wet dough, so don’t be surprised that it doesn’t come together as easily as other doughs but hopefully the oil and ‘low-knead’ process will ensure you end up with a lovely loaf. 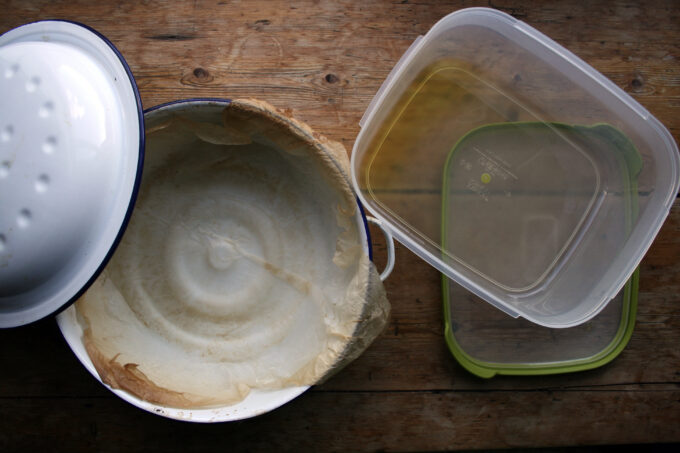 In terms of equipment, I’m using an oven-proof pot with a lid.  This is essential.  The lid stays on the pot for half the cooking time.  Any heavy pot with a lid would work.  I use my falcon enamel 26cm roaster but I have used my cast-iron casserole dish in the past with equal success.

I’m also doing my initial mixing in my smeg stand mixer with a dough hook attachment.  It doesn’t have to be done this way, it can be done by hand in a bowl but it’s very messy and I’m quite lazy, plus I love my stand mixer so it’s a no-brainer.

You will also need a sharp knife or blade for scoring – I use my bread knife.  A water spritzer / mister is also handy

You will also need a large bowl, (or a large plastic container with a lid which is my new favourite way to do it) more olive oil and some baking parchment. 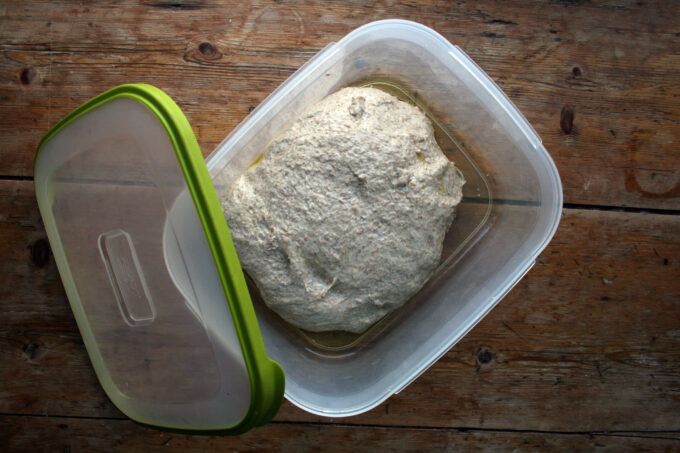 Place all the ingredients into a bowl and bring together into a shaggy mess.  If you’re using a stand mixer with a dough hook, let the dough hook knead the mess for about 2 mins.  If you’re doing it by hand, oil you hand and then just knead it gently in the bowl for a couple of mins.

Tip the shaggy mess into a large oiled bowl or large oiled plastic container. Pop the lid on (or cover in cling film if using a bowl) and set aside for 30 mins

It should be a wet-ish dough.  This is good. 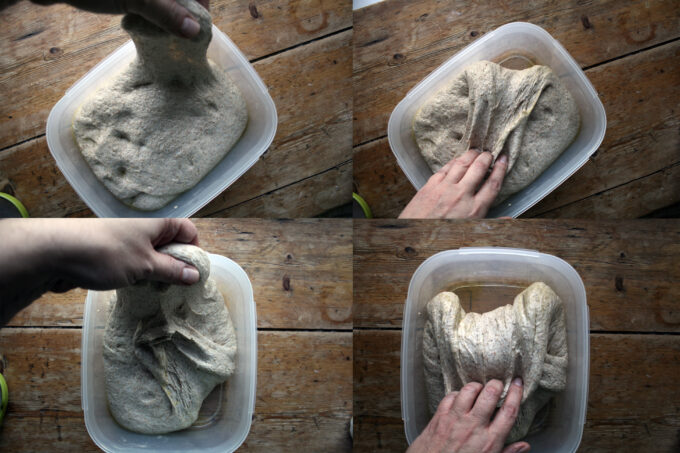 After 30 mins, oil your hands liberally, then take the lid off the container and do a set of 4 ‘stretch and folds’ with the dough.  If you think of your bowl or container as a compass with a north, east, south and west, then pull up the dough from the north end and fold it over, then turn the container and do the same at each point of the compass.  This will be tough the first time you do it as the glutens haven’t had too long to start working but it will get easier as the dough softens.

Pop the lid on and set aside for another 30 mins

Repeat the above ‘stretch and folds’ twice more, with 30 mins between each set.  Each time you should notice that the dough becomes softer and more pliable.  Air bubbles should start to appear.  Try not to pop them. On the 3rd go, I also push my fingers into the dough creating a dimpled effect which seems to add more air.

After the 3rd time, pop the lid on and leave for at least an hour until the dough has risen and is double in size.

After the dough has had it’s hour prove and is ready for the next step, pre-heat the oven to 230C – this is quite important but if your oven doesn’t go to such high temperatures then just take it to the highest it will go. It usually takes about 30 mins to pre-heat an oven this high which is just enough time for the shaping and second proving.

Firstly, prepare the vessel that you’re going to bake the bread in.  As mentioned above I am using an oven-proof pot with a lid.  This is essential.  The lid stays on the pot for half the cooking time.  Any heavy pot with a lid would work.  I use my falcon enamel 26cm roaster but I have used my cast-iron casserole dish in the past with equal success.

I cut a piece of parchment larger than the pot, then scrunch it into a ball, flatten it out again and lay this over the top of the open pot, ready to receive the shaped dough 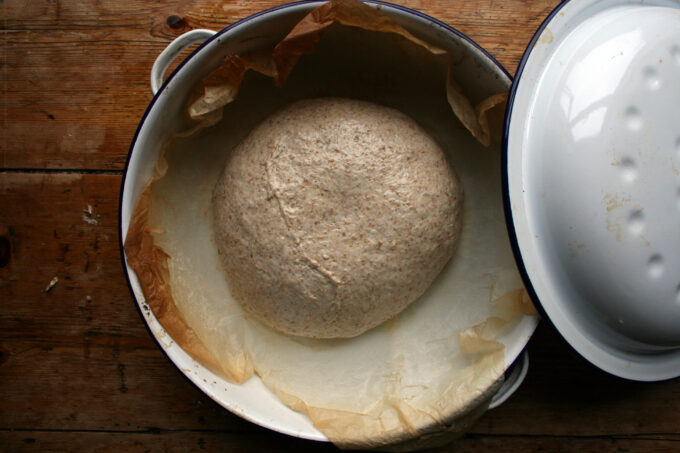 Step 7 – the shaping and second proving

Oil your work surface and your hands, then gently tip the risen dough onto the oiled surface and punch it flat into a rough oval shape.

Once you’ve gone all the way around the dough ball, flip it over so that the messy pinched middle is underneath.  Now, using both hands in a cupped shape, continue to form a ball shape. Scoop the dough from top to bottom, almost as though you’re trying to tuck it in under itself. Again, you should start to feel the tension in the ball of dough as you do this two or three times to get that perfectly rough shape.

Lift it swiftly but gently onto the parchment paper in the pot, which should envelop it slightly as it sinks down into the pot itself.

Place the lid on the pot and set aside for 30 minutes for the second prove. 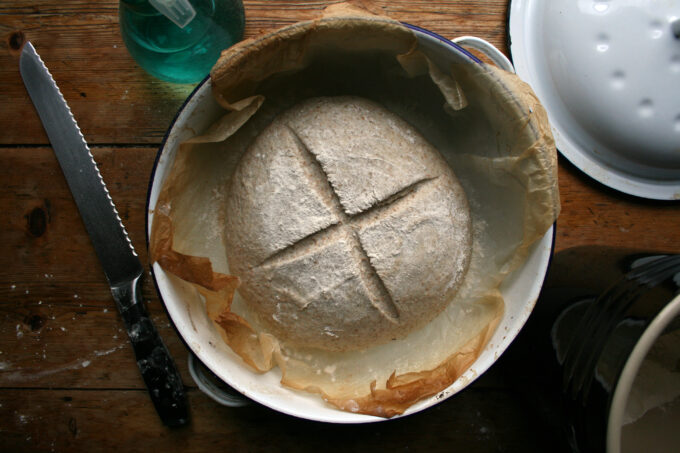 After 30 minutes your dough should be suitably risen and your oven is now nice and hot.  Spritz the top of the dough with water. I use an old plant mister but you could just sprinkle some cold water on top and wipe it over with your hand.

Sprinkle some flour over the top and then gently wipe the flour onto the surface so that it’s evenly and lightly distributed over the dough.

Now, slash a deep and wide cross across the top of the dough.  I use my serrated bread knife for this as it’s nice and sharp and cuts quite deeply.

Once baked, carefully remove the bread from the pot and let it cool completely (at least an hour) on a wire rack before slicing. 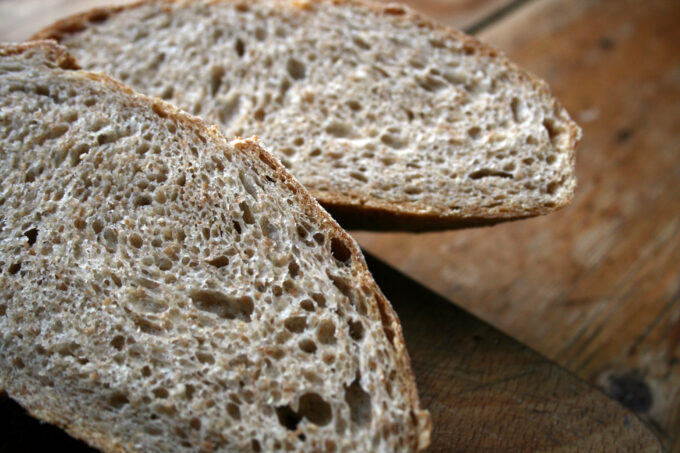